“The Renaissance Nude” at the Getty 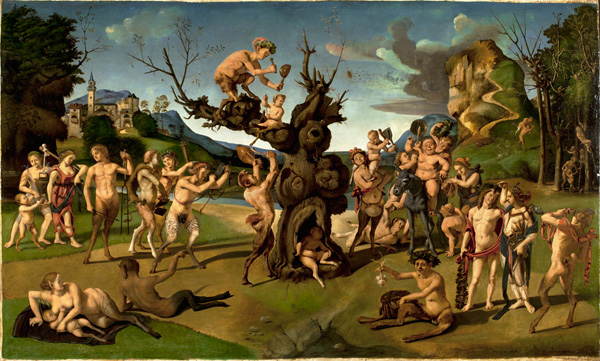 “The Discovery of Honey by Bacchus,” about 1499, Piero di Cosimo, Oil on poplar.

The J. Paul Getty Museum is hosting The Renaissance Nude, an exhibition tracing the emergence and influence of the nude in Renaissance art. The exhibition, featuring more than 100 works of art by masters of the era, is on view through January 27, 2019.

“Drawing inspiration from classical sculpture and the study of the live model, Renaissance artists made the nude central to their art, creating lifelike, vibrant, and varied representations of the human body. This transformative moment is one that would shape the course of European art history and resonate through the present day,” the Getty Museum writes.

With works by masters such as  Leonardo da Vinci, Raphael, Michelangelo, Durer, Titian and others, the exhibition traces the rise of the nude over the course of a century. Masterpieces  made in Italy, France, Germany, and the Netherlands, from the early 15th to the early 16th century makes its way to the exhibition, examining how artists across Europe approached particular subjects and themes, ranging from the body of Christ and St. Sebastian to the nude in the landscape to Venus, the power of women, and male sexuality.

The Renaissance Nude is organized in five thematic sections — Christian Culture, Humanist Culture, Artistic Theory and Practice, the Abject Body, and the Nude in Personal Iconography. Painting and sculpture feature prominently, but drawings, illuminated manuscripts, and prints find space in the show as well.

“Since the Renaissance, the nude has a central preoccupation of European Art. Yet until now, no museum has undertaken a comprehensive examination of where and how the nude obtained its preeminent place in art practice and history,” says  Timothy Potts, director of the J. Paul Getty Museum. “In bringing together some of the greatest examples of Renaissance art from major European and American collections, the exhibition explores the various aspects of this enduring and captivating subject, allowing visitors an unprecedented opportunity to immerse themselves in one of Western art’s richest and most innovative traditions.”

“In taking a broad view, this exhibition embraces the tremendous variety of nudes in the Renaissance across subjects, functions, media, and regions, tracing numerous strands of development, some familiar and enduring, some parallel but separate, and others short-lived but prophetic,” said lead exhibition curator Thomas Kren.

The Renaissance Nude examines the relative prominence of male and female nudes during the Renaissance. Whereas female nudes by Titian, Giorgione, and Correggio, all represented in the exhibition, helped make the female nude one of the most popular themes in European art. The exhibition shows that in Italy, especially in the 15th century, the male nude was preeminent. The exhibition explores not only the very different notions of ideal beauty represented in Renaissance art but also the interest that artists often had in other types of unclothed bodies, including the ascetic, the emotionally distraught, and the aged.