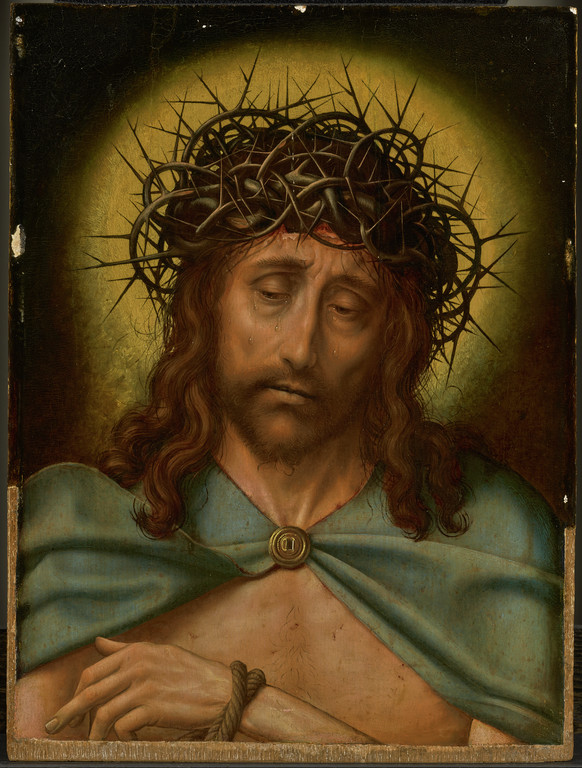 The J. Paul Getty Museum has acquired Christ as the Man of Sorrows, painted between 1520-30 by the great Netherlandish master Quentin Metsys (1465 or 1466 – 1530; variously spelled Massys, Matsys, Metsijs; Quinten). The painting has been in a private collection for centuries and was previously unknown to art historians. Its discovery and attribution expands the oeuvre of one of the leading painters in early sixteenth-century Antwerp.

“Christ as the Man of Sorrows is a powerful and deeply moving painting that exemplifies the sophisticated devotional imagery that made Metsys famous, and played a major role in Antwerp’s renown as a leading center of painting in the early 16thcentury,” said Timothy Potts, director of the J. Paul Getty Museum. “This discovery adds a major masterwork both to the artist’s oeuvre and to the Getty Museum’s paintings collection. It ranks among our most important 16thcentury Northern European paintings and is already attracting much attention from scholars of this period.”

Quentin Metsys was the most prominent and esteemed painter in Antwerp during the early 16thcentury. He was known for his compelling portraits, sophisticated use of color, and representations of emotion and expression. Drawing on the example of 15th century predecessors and receptive to Italian influences, his work marked a turning point in the history of Netherlandish art. Over the course of an extremely successful career Metsys introduced new types of portraiture and secular painting, positioning himself as a leader in Antwerp as the city developed a reputation for artistic innovation. Metsys’s reputation endured as the “father” of Antwerp painting, and his works were particularly prized in the early 17th century by collectors and artists such as Peter Paul Rubens (1577-1640). The Getty’s new painting is a powerful yet intimate depiction of Christ, who is shown wearing a crown of thorns that graphically pierces his flesh, his physical torment emphasized by flowing tears. In a remarkably fine state of preservation, the devotional painting is a superbly executed treatment of a popular and widespread subject at the time.

“In Christ as the Man of Sorrows, Metsys combined late medieval specificity – still meaningful in the early 16thcentury – with a new emphasis on Christ’s humanity. In contrast to earlier devotional images, Christ as the Man of Sorrows was intended to elicit compassion from viewers,” said Davide Gasparotto, senior curator of paintings at the Getty Museum. “This exceptionally moving painting is a striking testament to the artist’s skill and innovation.”

In the Netherlands, Christ as the Man of Sorrows and related subjects, such as the Salvator Mundi, were often paired with an image of the sorrowing Virgin or Virgin in prayer. Christ as the Man of Sorrows may have once been half of a diptych as part of an altarpiece with the weeping Virgin or perhaps as a separate panel with the Virgin as a pendant. Alternatively, given its scale (19 ½ by 14 ½ inches) it could have been painted as an autonomous devotional image which, at the request of a patron, could have been combined with a depiction of the Virgin. The original engaged frame (now lost) featured an arched top, surrounding the radiance and covering the upper corners of the panel – a typical configuration that focused attention on the head of Christ.

In the late 19thcentury, the picture, then in a princely collection in Bavaria, was listed in an auction catalog attributed to the 15thcentury Netherlandish painter Rogier van der Weyden. The painting remained with the family bearing this attribution through the 20thcentury. It was never published or exhibited. In 2016, experts assessed the work and attributed it to Metsys, notably for the delicate modeling, crisp details and close resemblance to the artist’s large-scale narrative treatments of other Christian subjects, such as his Ecce Homo (Venice, Palazzo Ducale).

Christ as a Man of Sorrows was exported from Germany to the UK, and the Getty Museum purchased the painting recently in a private sale.

This is the first work by Metsys in the Getty’s collection and the only painting by the master in Southern California. After a short period of conservation and technical study, it will go on view in Spring 2019, exhibited to the public for the first time in modern history, at the Getty Museum, Getty Center.