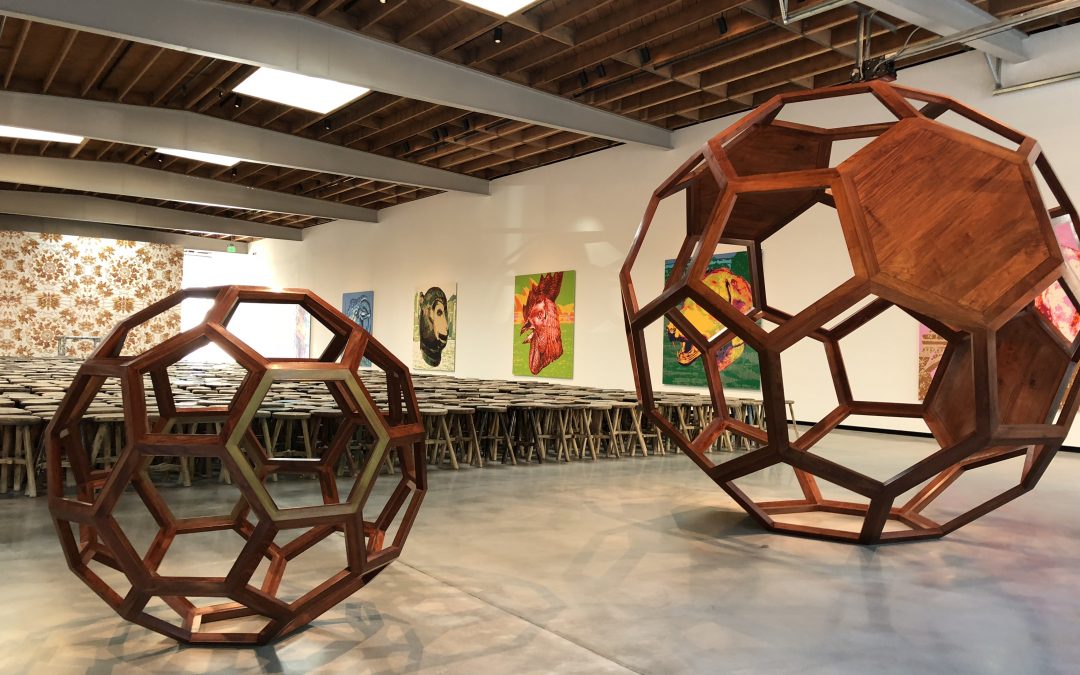 The Chinese dissident and art world superstar Ai Weiwei can’t be everywhere at once, but his art certainly can. In a confluence of events, Ai, who previously had not had an exhibition in Los Angeles, currently has three on view in the City of Angels: Life Cycle at the Marciano Art Foundation (through March 3, 2019); Cao/Humanity at UTA Artist Space (through December 1); and Zodiac, which is running at Jeffrey Deitch, the eponymous new gallery in Hollywood, through January 5, 2019. Curated by the artist and Deitch, Zodiac ebbs and flows much like in a museum, with a cohesive focus and ample walking room, and with the show’s central spectacle Stools (2013). 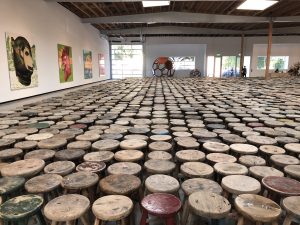 The work is a collection of 5,929 wooden stools from the Ming and Qing Dynasties and the Republican period, and were “gathered from villages across northern China.” The sea of seats is a ghastly exchange of seeing, a reflection on a once commonplace Chinese household item. It is in this way a view into domestic life in China at not one, but many points in time. The gallery mentions that this show is “the first time Ai Weiwei has seen the work exhibited in person,” a reality resulting from his only recently reinstated access to his passport. 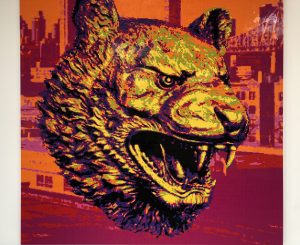 Around the mesmerizing, meditative Stools are the Zodiac pieces for which the exhibit is named: pixelated and vibrant, each of these 12 works is like staring at screenshots of a nuanced 80s video game. Each a symbol of particular years, the heads of animals of the Chinese zodiac float against various landscapes. Made of plastic LEGOs, they draw upon Ai’s sculptures from his Circle of Animals / Zodiac Heads (2010) series, and the landscape images in Study of Perspective (1995–2003), the latter being memorable in that Ai gives the world his, well, middle finger. 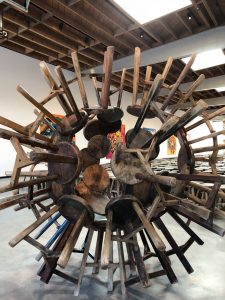 Certain images, like Zodiac (Dragon) (2018), make this marriage abundantly clear, with this piece featuring a miniature rendering of the artist in the background, clad in a T-shirt stamped with a pixelated “F***”. A collision of cultures, these works explore past and present in many ways. The medium, for example, is a rejection of the notion that art is an unearthly, exclusive entity; it is derived from and appealing to children, just as it is from and to adults. 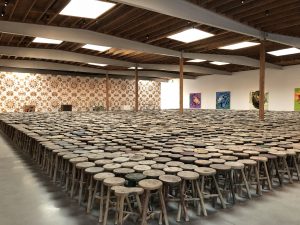 Various shapes take form in the show – pentagons, hexagons, squares. Such shapes meet to create three-dimensional mounds at both the front and the back of the gallery. By the entrance are Divina Proportione (2010) and F-Size (2011), the brainchild created from studying a mathematical illustration by Da Vinci and a plastic kitten toy. Soccer-ball like sculptures comprised of wood, these forms feature the aforementioned hexagons and pentagons, constructed neither by bolts nor with beams, but with Ai having employed Ming Dynasty-era woodworking. 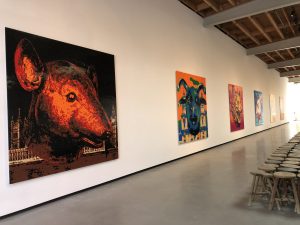 This also applies to the seemingly anti-gravity Grapes (2011), which highlights his “interest in accumulation and collecting [which] relates to his desire to understand how an individual relates to society, to memory, and to objects that evoke a particular time.” In this sculpture, stools are conjoined and metaphorically representative of China’s socialist history, when the individual was not so, but attached onto others. 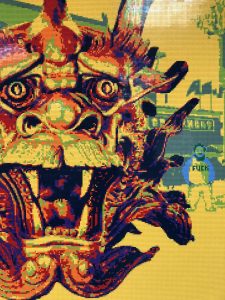 Continuing with his exploration of historical Chinese craftsmanship is Ai’s cube series. Situated at the back of the gallery, materials like marble, porcelain, wood, crystal, and even tea are formed into cubes, not altered for functionality as they traditionally have been. Beside these is Treasure Box (2014), which was inspired both by treasure boxes from the 18th century as well as by the work of Marcel Duchamp (specifically his piece Boîte en Valise (1935-41). This box, unlike the inspirations it was born of, does not house any particular treasures – but is, instead, to be marveled and examined as a structure alone. 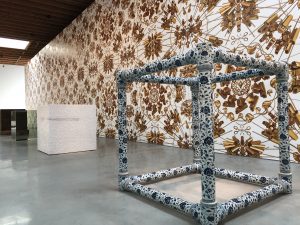 The gaudy white and gold background behind the cube series is entitled The Animal That Looks Like a Llama But is Really an Alpaca (2015). Fittingly placed as a background to the gallery show, this wallpaper is really a kaleidoscope of surveillance cameras. It is not some grandiose display of hypothetical ‘Big Brother’ paranoia: Having been under house arrest himself for the course of several years, Ai was subject to continuous surveillance by the Chinese government. With this piece, the artist “draws on his personal experience to comment on the encroaching surveillance state both in China and in the West” and “the deceptive sense of freedom that people can experience.” 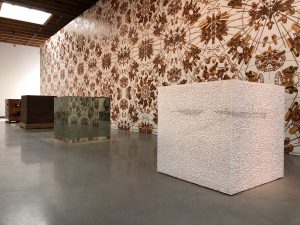 In his art and in his activism – which he believes are intrinsically tied – Ai continually emphasizes the word “humanity” (and in fact has a book with that very title). This show honors his ongoing commitment to pay attention to generations past and future, the points at which they do and should intersect, and the humanity that is unveiled in that process. When questioned about the power of art in an interview with the Asylum Seeker Resource Centre, he said it is “to give a definition – a new definition – and not to take an old answer.” In his study and appropriation of the old alongside the current, Ai seeks such new answers. These aspirations seep into every aspect of his work, an example being his 2017 film Human Flow about the scale of today’s refugee crisis, which today, seems even more tragic as it is ever more relevant.