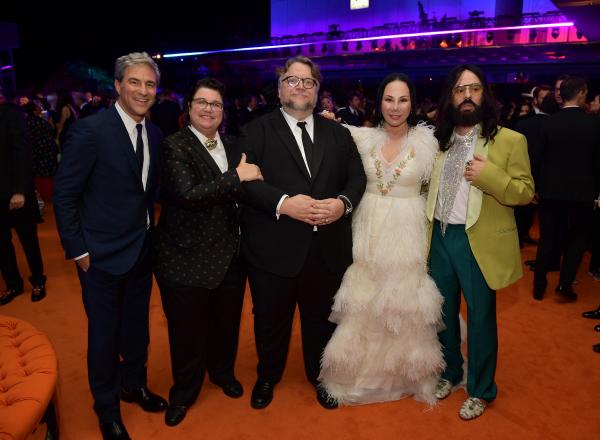 Eva Chow, co-chair of the Art+Film Gala, said, “I’m happy that we honored Cathy Opie and Guillermo del Toro in what was our most successful Art+Film Gala yet. It is so special to acknowledge Cathy’s and Guillermo’s creative work as we continue to support LACMA’s film initiatives and programs. My immense thanks to Alessandro Michele, Marco Bizzarri, and the entire Gucci team for being our faithful partner since the very beginning, and to Beck for his amazing performance.”

“I’d like to express my sincere gratitude to both Eva Chow and Leonardo DiCaprio, who have served as the Art+Film Gala co-chairs since the inaugural event,” said Michael Govan, LACMA CEO and Wallis Annenberg Director. “Last night, we honored the achievements of two artistic innovators who share an exceptional commitment to telling stories of the human experience. Cathy captures aspects of American culture, identity, and politics that connect with viewers of all backgrounds, and Guillermo challenges us to ignore our traditional art historical narratives and hierarchies as he blends and reinvents conventional genres. We are thrilled to celebrate their accomplishments and contributions.”

The Art+Film Gala began with red-carpet arrivals of art world and entertainment luminaries, fashion icons, and renowned artists at LACMA’s Wilshire Boulevard entrance. This year, transportation and additional support for the gala was provided by Audi. Guests then moved through the museum’s Smidt Welcome Plaza to a cocktail reception on the museum’s Zev Yaroslavsky Plaza. After cocktails, guests proceeded to the Art+Film dinner pavilion overlooking Michael Heizer’s Levitated Mass (2012), where they were seated for a special dinner prepared by Edoardo Baldi of e. baldi Ristorante and Joachim Splichal of Patina Restaurant Group.

Following the evening’s dinner program, Will Ferrell invited guests to an outdoor performance. Dakota Johnson then introduced Beck, who powered through hits Devil’s Haircut, Loser, and E-Pro, with special guests Dave Grohl on drums and Greg Kurstin on guitar and organ. The set concluded with Where It’s At, featuring a mammoth covers’ medley including the Blondie classic Rapture, with vocals from very special guest St. Vincent.