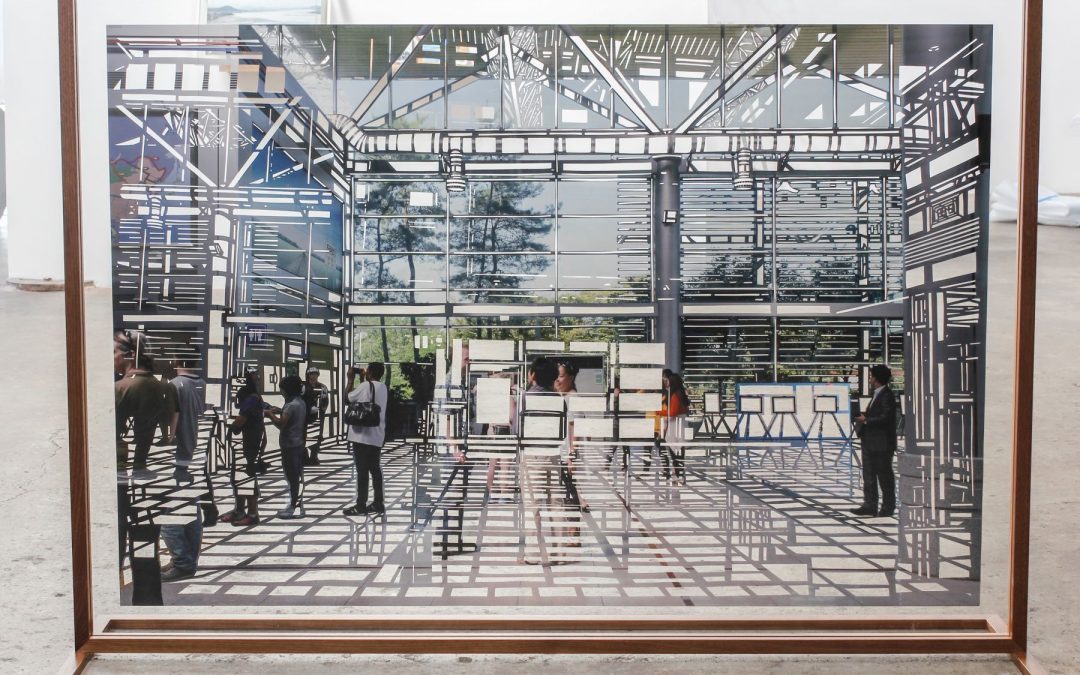 Homesick for a Better World

In the pre-digital world, a photographer often used a camera and film to frame some aspect of reality. Waiting to see the picture was not instantaneous, it was part of a process. One would look through the viewfinder and click the shutter to freeze what was in front of the lens. The film then needed to be processed and printed. For every traditional approach to photography however, there were also artists who were interested in using the photograph as raw material for explorations beyond what was framed in the original image. 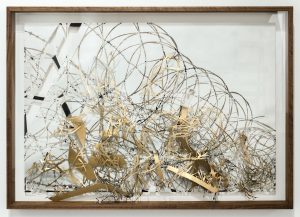 To those born later

While Soo Kim frames and reproduces the world in front of her (she has photographed many places including, Panama, Iceland, Dubrovnik and Korea), she also manipulates these original images by cutting away significant parts to leave a delicate structure that holds the picture together. Kim’s act of cutting does not feel like an act of violence (akin to Luciano Fontana, who sliced his monochrome canvases with a knife causing large fissures in the surface) as the absence she creates pushes the viewer to imagine the greater context of the image. 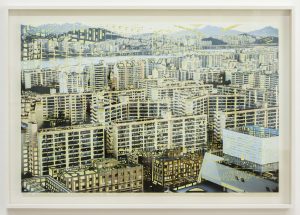 In Homesick for a Better World, images from both 2014 and 2018 are on view. The two works from her Backlight series, 2014: (He has surprised himself) and (When the light comes, after a few seconds, it comes as a sunrise) are photographs of cities at night. They have been intricately cut with a sharp blade leaving a criss-cross pattern of presence (black triangles, squares and pentagons) and voids (spaces where the shapes have been removed) interspersed with recognizable urban iconography like reflections in windows and fragmented signage. What is striking about these images is the color shadows on the otherwise white wall. This is caused by lacquer paint applied to the verso of the prints. 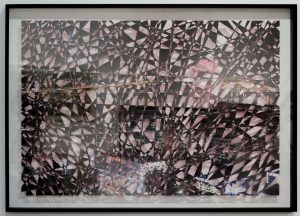 When the light comes, after a few seconds, it comes as a sunrise

While the locations depicted in Backlight are difficult to discern, it is clear that the two large floor-based photo-sculptures were taken at the Demilitarized Zone (DMZ) separating North and South Korea. These freestanding double-sided works are presented in custom frames that function like barriers. In each, Kim has sandwiched together two photographs of Freedom House (a modern building in the Joint Security Area in the DMZ) and then removed most of the windows and walls. In The DMZ (Ballad of the drop in the ocean), tourists, maps and views of trees out the window are isolated between the buildings structure; whereas The DMZ (Ballad of the branches and the trunk) focuses on the architectural perspective. These pieces are visually compelling, as well as disorienting. 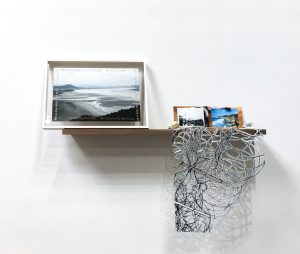 On the decay of love

The idea of disorientation and displacement is also reflected in To those born later. Before Kim excised the barbed wire fence out of the photograph she painted the back gold, so when the cut pieces cascade in disarray at the base of the work they have a shimmering and reflective presence that feels celebratory in reaction to the destruction of an imposing barricade. 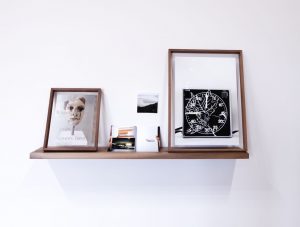 Love songs in a bad time

Kim’s undertaking is time consuming as each single or double-sided photograph is carefully hand-cut while keeping the rectangle intact. While the images could allude to ruins and remains, the precision of her geometry suggests something other than destruction. Via a subtractive process, she creates a presence. By creating an absence, a cumulative void – the surroundings, be it the wall or the space of the gallery – fill in the gaps and satisfy the natural tendency to want to reconstruct that which is missing or displaced. 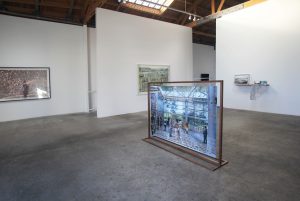 The doubling depicted in Kim’s images functions like a collage between then and now. That she is Homesick for a Better World refers to a yearning for that which no longer exists. No matter how much you slice away in an attempt to see through, you can never fully escape the past. Kim’s photographs are abstracted representations, or perhaps representational abstractions that engage with both truth, and photographic illusion. They function as windows onto fragmented worlds.

Cover image: The DMZ (Ballad of the drop in the ocean)

This review was originally published by What’s on Los Angeles, November 1, 2018.