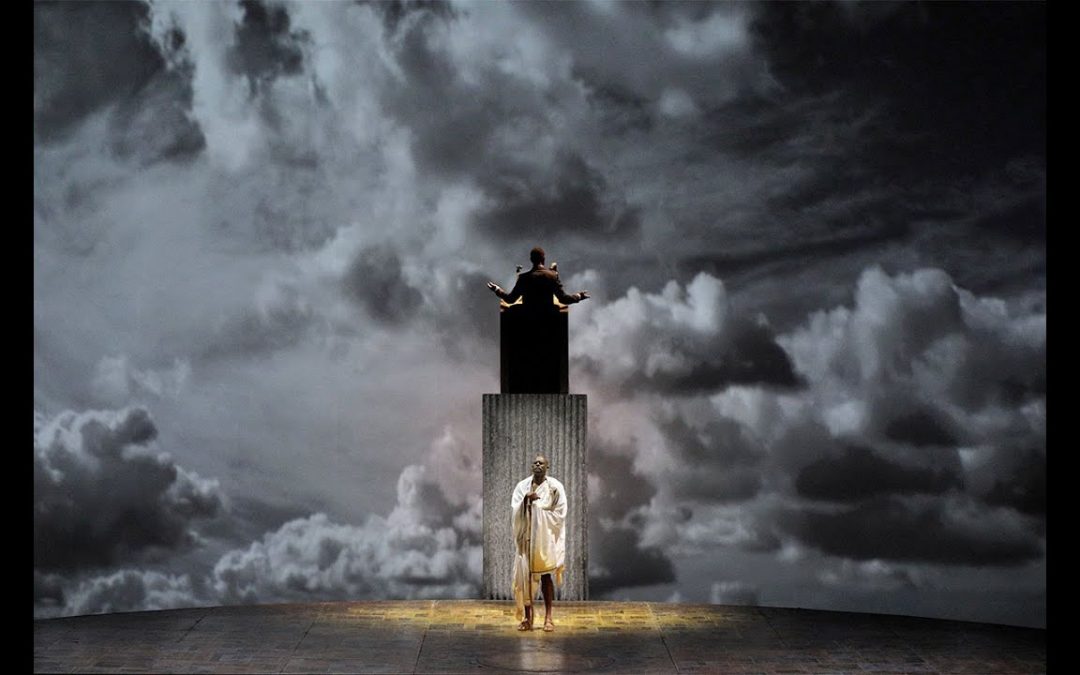 LA Opera has another hit on its hands with Philip Glass’s Satyagraha, the term Mohandas K. Gandhi designated for nonviolent resistance, often translated as “truth force.” It was the composer’s first opera created for “traditional” operatic forces, and, with a text drawn from the Bhagavad Gita, the Hindu sacred text central to Gandhi’s worldview, the opera is sung in Sanskrit, with a libretto by Constance DeJong. LA Opera’s presentation of Satyagraha, which premiered in 1980, marks the company’s completion of Philip Glass’s “portrait trilogy” of operas about powerful thinkers who changed the world, following Einstein on the Beach (2013) and Akhnaten (2016). 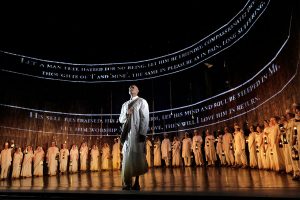 Though Mohandas K. Gandhi (1869-1948) is primarily associated with the history of India, Satyagraha focuses on the years he spent as a young attorney in South Africa, from 1893 to 1914. The opera depicts the development of his philosophy of satyagraha (Sanskrit for “truth force”), which guided his concept of political struggle through active, loving, non-violent resistance. Gandhi’s struggles and triumphs are linked to the past, present and future, celebrating the lasting effects of human goodness. 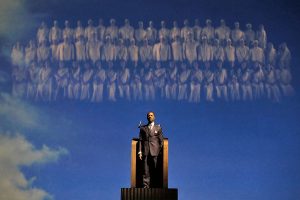 Of the work, Plácido Domingo, LA Opera’s Eli and Edythe Broad General Director, said: “I believe that opera has the power to change lives, and few works exemplify this more than Satyagraha. This masterpiece by Philip Glass was inspired by the life of Gandhi, whose powerful ideas changed the course of history and continue to resonate with us today.” 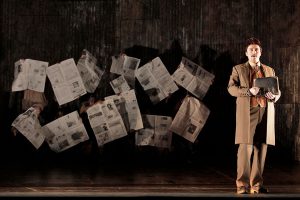 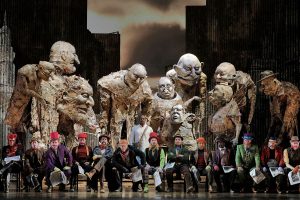 Sean Panikkar (center, in white) as Gandhi with the men of the LA Opera Chorus in LA Opera’s 2018 production of Satyagraha. (Photo: Cory Weaver) 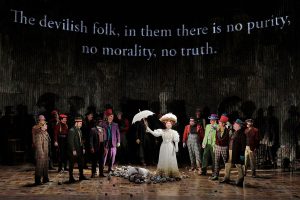 The production comes from English National Opera, where McDermott and his team, including associate director and scenic designer Julian Crouch, have given the work relevance, resonance and a reason to go to the theater: There are giant puppets made mostly of newspaper, quirky mechanical devices, video projections (59 Productions) and colorful costumes designed by Kevin Pollard. Other historical figures also make appearances – Tolstoy, Rabindranath Tagore and the Rev. Martin Luther King Jr. One might balk at the running time of three hours and 25 minutes, but the opera, indeed, is more like a musical meditation, with Glass’s minimalism having maximal impact.