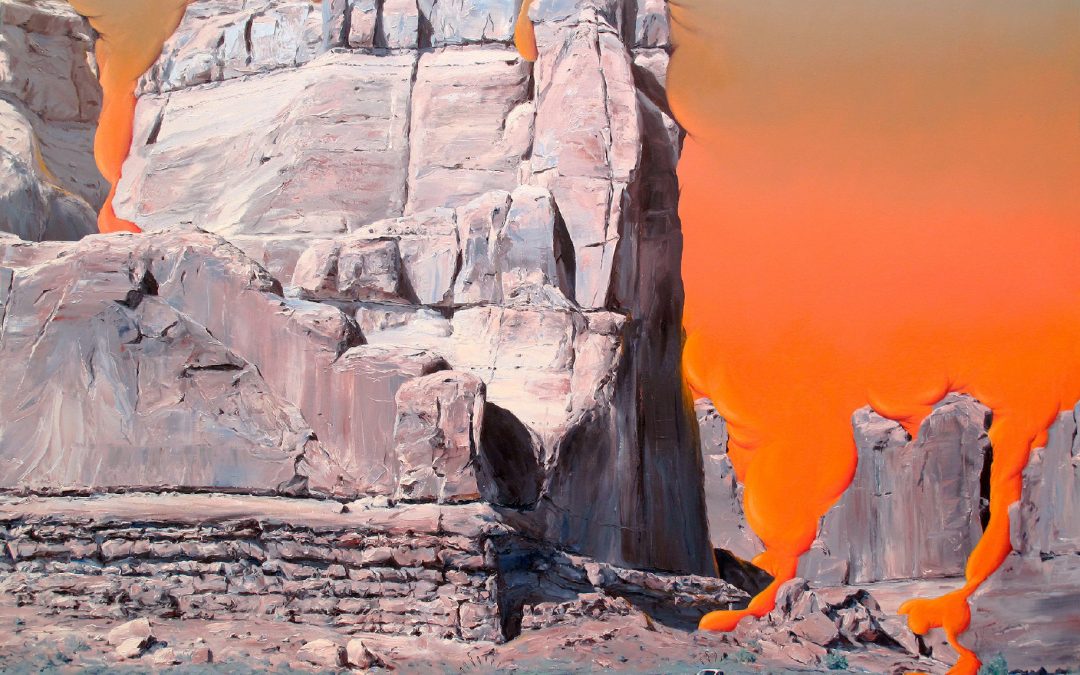 
What would happen if the natural landscape developed sores? Mountains and rivers would ooze red, alluding to something abject beneath the surface. The documentation of the recent volcanic eruption in Hawaii comes to mind as an example of blistering lava emanating through the landscape, cascading down hills and roads. The Spanish artist Paco Poment, whose paintings are on view at Richard Heller Gallery in an exhibition entitled Melancholia imagines such environmental catastrophes and anomalies. 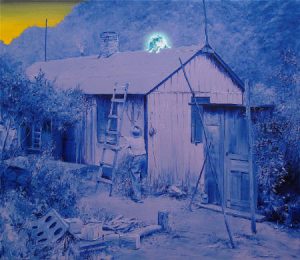 Llagas (all works 2018) is a painting of 1960s-era cars parked at the base of a mountain resort. In keeping with Poment’s unique style, the realistically rendered image is a monochrome interrupted by jarring areas of color. The scene in Llagas appears as the aftermath of an attack where a huge sickle slashed everything in sight leaving deep red crevasses. Dusk Attack is a different kind of atmospheric aberration. Here, the sky has been painted the color of dusk and presented as a thick orange substance that flows over giant rock formations, cascading down from these peaks to the road below. This glowing orange atmosphere, whose sudden presence comes as a surprise to the exasperated cars speeding away, has a science fiction, other-worldly aura. 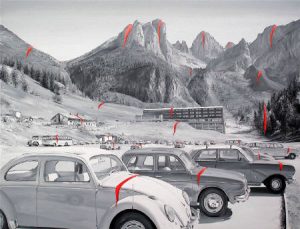 Levante – Poniente depicts a mountain like the Matterhorn being pulled in opposing directions by pink and orange strings. The grayish blue rendering of the mountain landscape against a cloudless sky is picture perfect, except for the fact that the mountain is in the process of being dislodged and decapitated. It is difficult not to view Pomet’s paintings under the guise of climate change. The works present imagined scenarios with humor and dismay. While they have a Twilight Zone or The Outer Limits sensibility, they also illustrate the potential for the demise of the planet in unexpected ways, and in doing so trigger emotional responses filled with, “what if…” 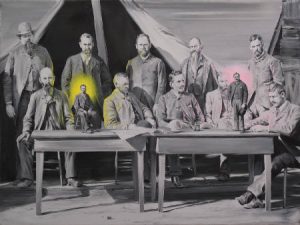 While many of Pomet’s paintings focus on the natural landscape, people also appear. Pomet often works from found or family photographs and expands upon the oddities of the relationships depicted within these images. He transforms the ordinary into something surreal. Infinite Sadness is a portrait (probably taken in the 1950s) of six formally dressed men and one woman seated or standing behind a table. Between the figures and the table, which is painted to represent the ocean reflecting the setting sun, is a glowing circle. This yellow/orange sun illuminates the edges of the smiling monochrome figures, who are oblivious to the phenomenon of capturing or containing the sphere. 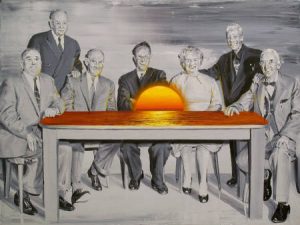 The sun (as a yellow ball) and the earth (as a blue one) appear in different ways in Pomet’s imagery. The earth is personified — has hands and feet— or is grounded in paintings such as Eclipse, or Insomnia, a painting most likely based on a tintype image of a standing soldier and a seated woman. Rather than a traditional weapon, the soldier clutches a glowing globe. In Mrs. Sunset, Pomet begins with a Victorian era photograph of a seated woman, replacing her head and hands with wide beams of bright yellow: an uncanny depiction of a woman. Pomet’s paintings challenge established power dynamics between men and woman, as well as between humans and nature. The works displace expectations as to who or what is in control. 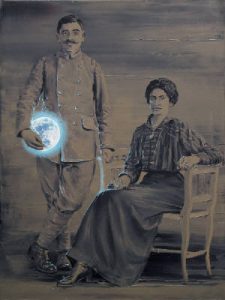 In his current paintings, Pomet includes cartoon elements and computer icons— those ubiquitous graphics that locate imagery within the digital realm. Choosing Hell [after Thomas Cole] is a realistic painting modeled on works by Thomas Cole. At the bottom of the picture on each side, Pomet presents an icon of a snowflake and one of a flame. An arrow-shaped cursor touches the flame— choosing hell. The inclusion of computer iconography is a curious move and while it adds another layer of appropriation and stylistic diversity, it directs the pieces toward cartoons and mutes the power of Pomet’s message. As he states, “A slight misanthropic drift has imbued many of my themes lately, however, a bright and clean humorous streak can appear dressed up in oil paint at any moment!” 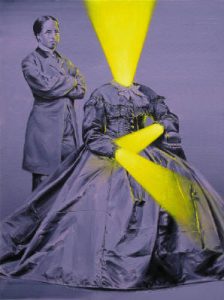 This review was originally published by What’s on Los Angeles, October 4, 2018.