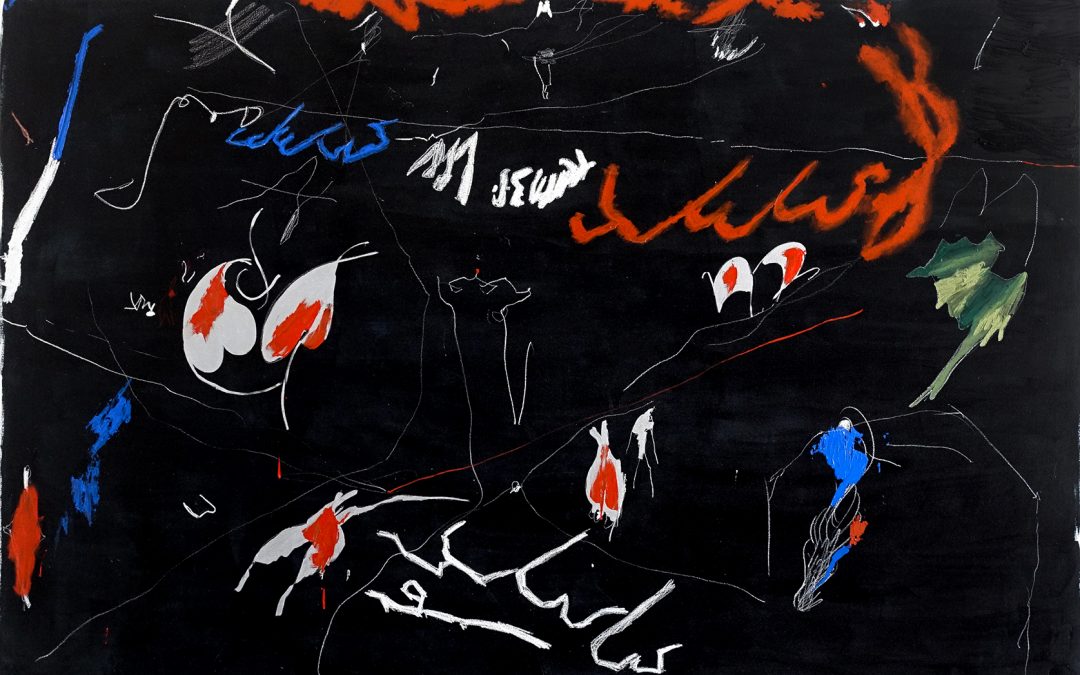 
Situated in East Hollywood, in a complex that was home to Ed Ruscha’s first studio, The Lodge, like many contemporary galleries, is wrapped in layers of history. It is fitting, then, that the current exhibit there is one artist’s meditation on her own intersecting histories – in other words – “her negotiation of two cultures.” Maysha Mohamedi is a young, Iranian-American painter who lives and works in Los Angeles. Co-founder of the art collective Binder of Women, she is active within the artistic community on multiple scales; several weeks ago, a traditional and informal Coffee Reading gathering took place at the gallery, in which Mohamedi herself interpreted the coffee and conversed with attendees. 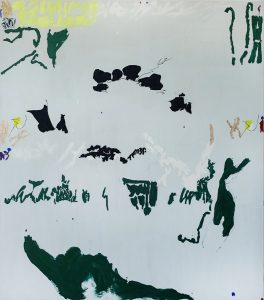 Large and small paintings decorate the walls within the first room, with some incorporating lines of glitter, while others feature scratchy marks – some harnessing a combination of both. Consistent throughout her pieces are the primary colors: reds, blues, greens, yellows. It is with these solid and simplistic colors that the duality of the meanings become apparent. Mohamedi’s works reference “fate, play, and dominance – ideologies central to the Iranian mind.” 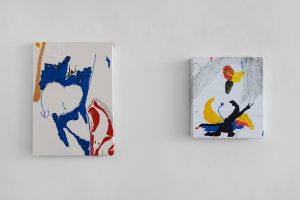 The 71 x 27-inch Monarch Splat (Largo) (2018) faces the viewer with abstract arches and organic splotches of yellow, orange, and black. On the left wall is Christmas Beetle Pleasure Dome (2017), in which sketchy, insect-like markings float. Though rendered in oil on linen, this work clearly proves an appreciation for the mixed media employed in her other works – thin ribbons of pen, thick strokes of paint, feathery stretches of graphite – to name a few. 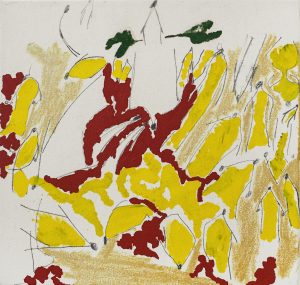 The space, charming and quirky, also features a sun-drenched alleyway that leads into a second room, where larger-scale paintings like The Hardest Fontanelle (2018) and Pinball Wizard (2018) more explicitly emulate calligraphic forms from the Farsi alphabet; curvilinear lines, some ghastly, some writhing, sit in front of large expanses of solid color. (The whimsical titles of her works often satirically allude to their geometric compositions.) 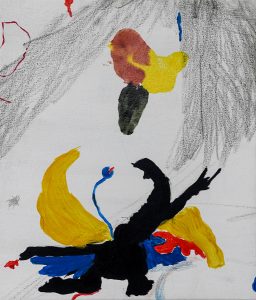 Sneaking Into Your House Music

In the case of Off Ma Meds (2018), red, white, and blue engage and oscillate against a black background. A drip here and there, small indistinguishable shapes, and a seemingly construed Farsi text are accompanied by a singular patch of green abstraction that floats at the right of the canvas. Chromatic moments like these more explicitly allude to Mohamedi’s bicultural identity. It is the calligraphic moments that, the gallery writes, “symbolize the lens through which Mohamedi represents the internal world of her gender, her species, and her self.” 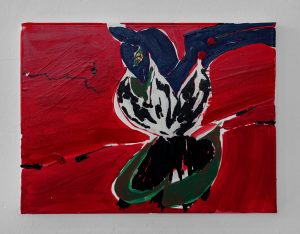 The artist’s scientific background makes itself apparent in some of her works, as well: found tar, sourced from local and nearby beaches, play a part in defining the dark backgrounds on her canvases. In an interview with Matter of Hand, Mohamedi describes artistic intuity as a sort of membrane: “I want to make paintings that feel very true. I think I can do that if I don’t control the inception of the idea very much. I’m sort of like a semipermeable membrane; I just look at what’s around me, watch the thoughts that I have, listen to my children, listen to the air…” 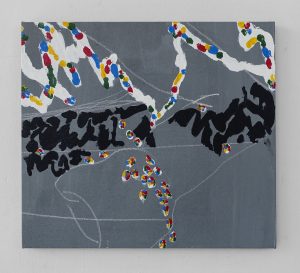 Though spiritually introspective and self-reflective, her works also utilize rugged forms sourced from places external (the afore-mentioned beaches, for example.) Some more figurative, some more lexical, the paintings vibrate and whirl with the lines and shapes that comprise them – just as Mohamedi herself is whirling, weaving, and decorating her own identity. Exploring, among many other questions, what it means to be a an Iranian-American woman, Mohamedi is, in this adaptable yet rooted stance, fulfilling OAR TATIG – that is, being “Open and Receptive to All That is Good.”

Cover image, Off Ma Meds; all photos courtesy The Lodge