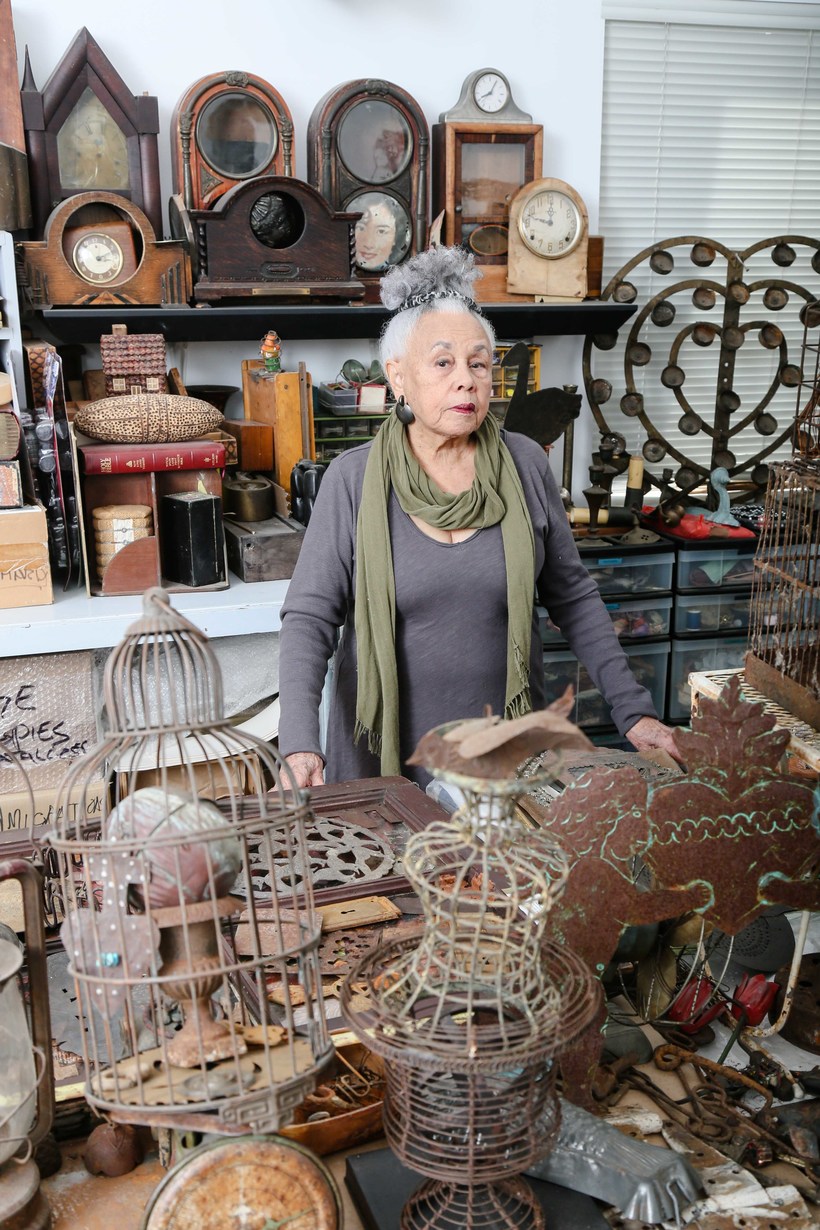 BETYE SAAR. COURTESY OF THE ARTIST AND ROBERTS & TILTON. PHOTO BY ASHLEY WALKER

The Getty Research Institute has announced the establishment of the African American Art History Initiative with the acquisition of the archive of world-renowned artist Betye Saar (American, b. 1926).

The African American Art History Initiative is an ambitious program to establish the Getty Research Institute as a major center for the study of African American art history. In addition to acquiring archives and related original sources, the initiative will establish a dedicated curatorship in African American Art History, a bibliographer with a specialty in the subject, annual research graduate and post-graduate fellowships, a program to conduct oral histories of notable African American artists, scholars, critics, collectors and art dealers, and partnerships with other institutions to digitize existing archival collections and collaborate on joint conferences, publications, and research projects. The Getty is starting the project with an initial $5M allocation and will be raising additional funds as the project develops.

“Betye Saar is one of the most innovative and visionary artists of our era. She has also, in many ways, been the conscience of the art world for over fifty years and we are so honored that she has trusted us to preserve her powerful legacy,” said Andrew Perchuk, acting director of the Getty Research Institute. “She played a large role in our exploration of postwar Los Angeles art that became Pacific Standard Time: Art in LA 1945-1980, and this acquisition is a particularly meaningful way for us to launch the African American Art History Initiative.”

Betye Saar’s pioneering assemblages and large-scale installations, grounded in unique materials and African American history, have had a profound and positive impact on artists and audiences nationally and internationally.

Saar began creating assemblages in the 1960s, combining her own drawings, prints, and etchings with found materials sourced from family albums as well as flea markets and swap meets. Like many of her artist peers working in Los Angeles at the time, Saar was profoundly affected by the Watts rebellion in 1965 and the death of Martin Luther King, Jr. in 1968. She addressed the personal and societal effects of race in early assemblages like Black Girl’s Window (1969) and introduced innovative materials such as leather, fur, yarn, plastics skulls, and poker chips in works like Ten Mojo Secrets (1972). Saar’s deep interest in mysticism and cross-cultural spiritual practice can be seen in dozens of her large-scale assemblages such as the shrine-like Mti (1973) and Spiritcatcher (1977). She works from a vast collection of found objects and images, some of which include derogatory and racist images of African Americans. In one of her most politically potent and groundbreaking works, The Liberation of Aunt Jemima (1972), she recast the stereotypical figure of the Mammie, the Southern black nanny and domestic servant, as an empowered woman by combining this persistent symbol of black female servitude (including the eponymous Aunt Jemima from the pancake mix box) with a Black Power fist and a toy rifle.

Saar was at the center of an animated Los Angeles art scene in the 1970s, collaborating and exhibiting with established artists like Charles White (American, 1918-1979) as well as with younger, experimental artists who coalesced around nascent galleries like Suzanne Jackson’s Gallery 32 and Dale and Alonzo Davis’s Brockman Gallery. Saar organized exhibitions of black women artists including Black Mirror (1973) and became active in the feminist art movement, serving on the board of the non-profit organization Womanspace with artist Judy Chicago (American, b. 1939). She was the subject of major exhibitions at the Whitney Museum of American Art and the San Francisco Museum of Modern Art in 1975, the Studio Museum in Harlem in 1980, and the MOCA Geffen in 1990 and, in recent years, Saar’s stature has only continued to grow. Her work is in the collections of important museums around the world. Following a major exhibition at the Fondazione Prada in 2016, in October 2018 an exhibition of her work will open at the National Gallery of Scotland. In 2019 she will have an exhibition organized by LACMA, which will travel to the Morgan Library in 2020.

The archive, The Betye Saar Papers, ranges from 1926 to the present covering her entire career and her life as an artist. The archive includes documentation of Saar’s prolific artistic production and her notable works in diverse media: sketchbooks of ideas, concepts, and Saar’s travels; prints and drawings; book illustrations and commercial graphics, as well as profuse documentation of her assemblages and installations. The archive features annual files on all aspects of Saar’s projects: exhibitions, catalogues, brochures and posters; ledgers of works created with records of exhibitions, galleries, museums, and collectors; letters, artist’s statements, and documentation on the circle of artists with whom Saar worked and collaborated. The archive comes with an important gift: a vintage photograph album depicting Saar’s family and friends: the 1918 Beatrice Parson Family Photo Album.

“As a child of the Depression, I learned at an early age the importance of saving things. ‘Use it up, wear it out, make it do, or do without’ was a common saying during my childhood,” said Saar. “As time went on, my saving turned into collecting, and collecting then evolved into the medium I use to create my art. Little did I know back then that my frugal roots would develop into a profession with such a creative outlet. I’ve taken great pride in preserving these items for some 80 plus years. Items such as my early childhood drawings all the way through to the art ledgers that I continue to use on a daily basis. I am very pleased that the Getty Research Institute shares my desire for ‘saving things’ and that they will be providing a home for many of my collections so that they will be accessible by scholars, the arts community and the generally curious alike.”

“The Getty is telling the world, through its actions, that American art has many facets,” said Jones. “The Getty has set out to create benchmarks and expand the field of art history. This initiative and its focus on archives is another approach to embracing a bigger idea of what art history is, by creating an important repository that will greatly impact the field and peer institutions. And in partnering with other institutions, including historically black colleges, we are also creating community through scholarship. I’m especially excited to think about the educational possibilities, at all levels, that will come out of this work.”