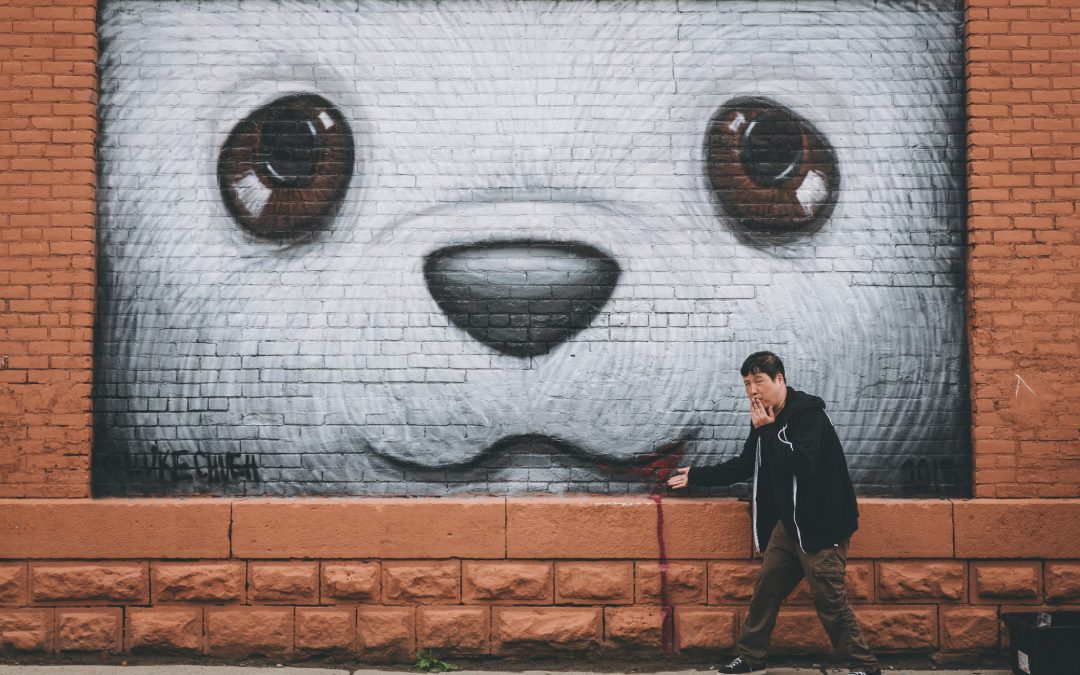 The Philadelphia-born, Fresno-raised award-winning graphic designer and illustrator whose works stylistically balance cute with brute – all walking the fine line between comedy and tragedy while employing minimal color schemes, simple animal characters and a seemingly endless list of ill-fated situations – plumbs his own psychological depths only to discover what makes him love work and life.

What historical art figure would you like to have lunch with and why? Salvador Dalí because I think he would be very interesting. He’d probably play with his food. If I was having that meal with him now I would take a bunch of pictures with my phone and post them on my social media and would get a bazillion likes. Also, Dalí was probably one of the first artists that I actually liked as a young person and remember seeing his work at the poster shops that were all over the mall. I grew up in the golden days of mall culture, and going to a Prints Plus you’d see a bunch of artworks on display and would always see a Salvador Dalí – like the melting watches. I think his work was always interesting and I would love to talk to him about ideas and also get his advice on how to chip away at this art game.

What did you purchase with the proceeds from your first sale? Unfortunately, I don’t really have a very romantic purchase [story]. I probably bought cigarettes when I was still smoking – and food. This was in 2003, and I didn’t really make a ton of money from that art sale – maybe a couple hundred dollars.

What words or phrases do you overuse? It was just pointed out that I say, ‘You know’ and ‘fuck’ a lot. I think I use the word fuck like a punctuation. I drop f-bombs all the time. It’s one of my favorite words. ‘Fuck’ or ‘fucking’ are probably the words I incorporate into my vernacular the most. I often have to really watch myself when I’m in front of children.

How do you know when a work is finished? I don’t know how to answer aside from when it looks done. My work isn’t like abstraction or anything like that, but it feels or looks done when it has a right balance of color or lack thereof [and] I can walk away from it without feeling regret. Then again, when that feeling of dread and regret comes creeping back at a show and I’d like to change things, but by then it’s too late.

When and where were you happiest? I often reflect back on birthdays as a child – and they all seem to fall on prime numbers, like 7, 11 or 13. Those were really happy days for me, but more recently, whenever I travel outside the U.S., specifically to countries like Japan. I love traveling there and try to visit once every couple years. I’m not Japanese but I really enjoy the foods, the popular culture and the all-around madness. I want to see some of the rural kinds of areas, but it’s hard to wiggle your way out of Tokyo, because there’s so much going on out there. I’ve been there three times and I can’t get enough of that crazy Tokyo culture.

What is your most treasured possession? I think I’d frame it with the idea that if my home was in peril, what was one thing I’d grab on my way out. But I don’t know if that’s a treasured possession or something out of necessity. I’d take my phone, but I don’t treasure it. If it’s a [treasured] possession, I would want to make sure that my sister and my mother were with me on my way out of the burning or collapsing building. But they’re not really possessions. I would probably say my life.

Rabbit On the Moon

What’s the worst survival job you’ve ever had? It was in the city I grew up in – Fresno – and Fresno is not really a center for culture in California. It was mostly a job that I held during a summer, but it left a very deep impression on me. I had to hustle. I used to work for one of those newsprint rags that you find at gas stations that sell used cars, and it was a really sad job. Seeing these people working this job was zero fulfilling. I was doing graphic design – arranging pages – with advertisers, and one of the managers told me ‘I know you have these romantic ideas of what you’ll be doing after school, but chances are it’s not going to work out that way.’ I was ‘Wow, this is really sad.’ I’ve worked tougher, even less glamorous jobs than that, but this left a bitter taste in my mouth, because of the all-around kind of hopelessness and bitterness that I saw on an almost daily basis. 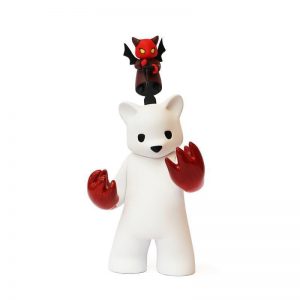 What TV series from your youth best describes your approach to life? There are two shows that I reflect on growing up with – The Young Ones, the British comedy show and The Kids in the Hall. Those two shows left an impact on me on how to manipulate a narrative. They taught me to look at things from an adjacent perspective, not just a head-on perspective.

If you could change one thing about yourself, what would it be? I would change my laziness, because when I’m feeling lazy, I am really lazy. I’m a sloth. I always create excuses for myself, saying ‘This is part of the process,’ but I just think that is my laziness getting the best of me.

What is your most treasured memory? One of my fondest memories concerning my career was the time I sold my first two paintings – that was way back in July 2003. When they paid me, [as I said] I bought myself some cigarettes and something good to eat, but the high of seeing those red dots next to my work knowing that I, at the time, being a complete nobody, created something that was strong enough to connect with a person willing to open their wallet, regardless who I was, and purchase these paintings for themselves. It was a feeling I had never experienced at the time. Creating work that actually connects with people and expressing that connection with money is something else. 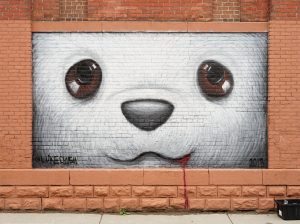 Oops, I did it (again), photo by Supersonic Art

When I was in college – I didn’t go to a fancy college – and studied graphic design, and before I graduated, my professors all pulled me aside on their own time and told me, ‘You know, Luke, you’re a mediocre graphic designer, but you’re a much better illustrator and you should look into going into illustration.’ I had figured that out already, that was my plan – to do some kind of illustration, but I didn’t know how to break into the illustration world [and] how to build a portfolio with illustration work. I started by showing at these underground warehouse shows – one-night shows featuring up to 90 artists who didn’t have a name and who were just developing a reputation. To [sell something] it just blew me away. It literally started a kind of chain reaction in my career where I was able to quickly find my voice and evolve it and move it forward, eventually getting the attention of galleries and starting to climb slowly that gallery ladder.

Wrestling (with Myself) – Suplex

What makes you smile? The love and happiness of my friends and family.

What makes you cry? My loneliness.

What is your go-to drink when you toast to a sale? I don’t drink, so it’s usually sparkling water like Pellegrino.

After an all-nighter, what’s your breakfast of champions? I’m a big fan of the Mexican fruit salads that you can buy on the streets of L.A. – pineapple, mango, maybe some cucumber, lime and chili. After being up all night you don’t want to put a ton of animal fat in your body. Something light that will fill you up and help you sleep easy so you won’t regret it the next day and wake up with a gut bomb.

What’s your best quality? My generosity. My kindness. My sincere kindness. I just want people to be happy around me. I want to bring happiness to people. I want people to walk away feeling, ‘I’m glad that I saw Luke and I’m glad he’s a part of my life.’ Whether or not I’m successful at that, I can’t say, but I think we all want to be productive members of society.

What is your current state of mind? I’m feeling good. I just got back from Detroit where I participated in a mural festival. I also just wrapped up my solo show [at Corey Helford Gallery] before that. Looking at the show made me realize that I’ve gotta step my game up. I’ve been flirting with different techniques and styles for a while now and I feel like I should commit myself more to this new direction that I’ve been playing with. They say that society – there’s always that question – does life reflect art or is art a reflection of life? I would say it can be both, depending on who you are, but the thing is, considering the current social climate of this country, the kind of work people want to see now is different than the kind of work I was producing 10 years ago. I feel like I need to get out, go to more shows, see what people are doing and see whether or not what I can learn from them can be reflected in what I’m doing now. I’m doing good, I’m healthy, but I feel that I need to really work on my evolution as an artist. 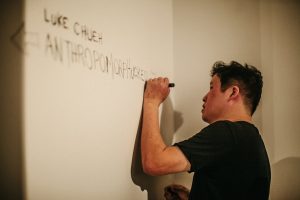 Who inspires you? My colleagues. Seeing the art work of my friends/colleagues motivates me, inspires me and makes me want to push myself harder. I think all artists are working their best to create their best work and afterwards evolve their work to the next level. Watching them achieve that next level with or without success is inspiring to me. It makes me want to find the next railing for me to grab onto in my own work. I can say I’m struggling to make that happen, but I think I’m beginning to feel/see the next step in my evolution.

What do you consider your greatest achievement? One of my greatest achievements was my first art toy that I produced. It’s a toy called Possessed and it was produced by a company called Munky King. It was my first vinyl collectible and it really made a pretty major impact on me and my career. We just re-released it this year on its 10-year anniversary. 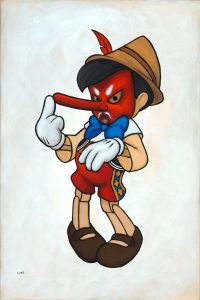 If you were to die and come back as a person or a thing, what would it be? It would be a panda. It would be great to live the pampered life. I’ve been painting characters that are least a little bit reminiscent of a panda, and when a lot of people see my work they think ‘panda’ or ‘bear.’ And the reason why I paint that character a lot is it’s inspired by pet names from ex-girlfriends, so it would make sense to me.

Cover image, Oops, I did it (again), photo by Trevor Denai of Supersonic Art