David Lynch: ‘I Was a Teenage Insect’
Master of the Macabre 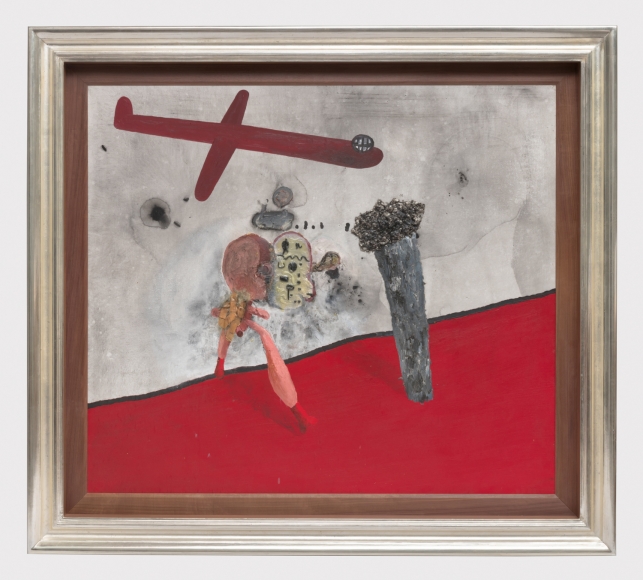 I Was a Teenage Insect


David Lynch is best known as a filmmaker and the director of Eraserhead, The Elephant Man, Blue Velvet, Mulholland Drive and Twin Peaks. That he is also trained as a painter may come as a surprise. His paintings share the absurdist sensibilities of his films, yet are presented as contained and encapsulated, rather than in long, meandering narratives. I Was a Teenage Insect is Lynch’s fourth exhibition with Kayne Griffin Corcoran, and on view are a selection of recent mixed media paintings that are nothing less than surreal character studies. 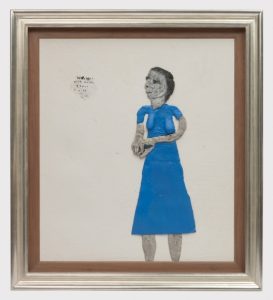 Woman with Small Dead Bird (2018) opens the sequence of large double-framed works. Lynch has crafted a dark-haired woman in low relief on a chunky, white-textured background. She is wearing a sky-blue dress and holds a dead bird cupped between her hands. To the woman’s right, in uneven black child-like scrawl, on the otherwise blank ground, is the title of the work. Moving from the woman’s face to her lumpy hands, the eyes finally come to rest on the trapped bird. The sequence of events — how the woman came to have the bird in her hands — remains a mystery, but because this is a work by David Lynch, it is easy to imagine an eerie scenario. 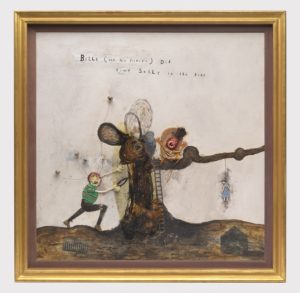 The other works follow suit with similar strangeness and ambiguity. In Billy (and His Friends) Did Find Sally in the Tree (2018), a footless Sally (perhaps the woman with the bird as her dress is similar) dangles from a noose looped over a large tree branch that juts horizontally across the composition. A discombobulated and eyeless Billy charges towards the tree trunk, his skull pierced by protruding wires and disembodied, marble-sized cartoony heads. A two-toothed, open-mouthed monstrous figure sits on the branch beside a ladder, hands raised in delight or horror.

In the title piece, I Was a Teenage Insect (2018) a part human, part animal hybrid, stands between a disproportionately sized black house and a gray picket fence. The small-scale fence and house are iconic symbols of home to the rebellious teenager. 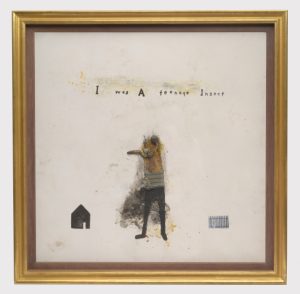 Lynch’s work illustrates the plight of imagined characters— Sally, Billy and Ricky, who all inhabit a maniacal dystopia. Ricky Finds out He Has Shit for Brains (2017) is a dark-toned, part paint, part collage work where a wire armature covered in dark brown goo emanates from an impastoed head surrounded by uneven swipes of paint the color of over-cooked peas. 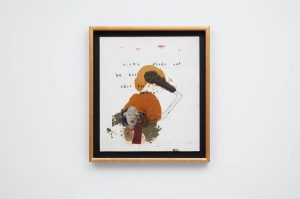 Ricky Finds out He Has Shit for Brains, 2017

While there is an underlying humor in Lynch’s art, for the most part these complex and competently crafted works are nasty and disturbing glimpses into an unpleasant place that no one would want to call home. 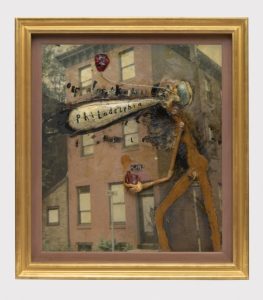 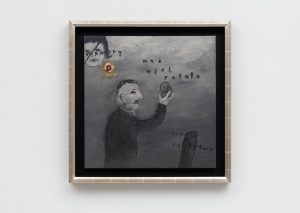