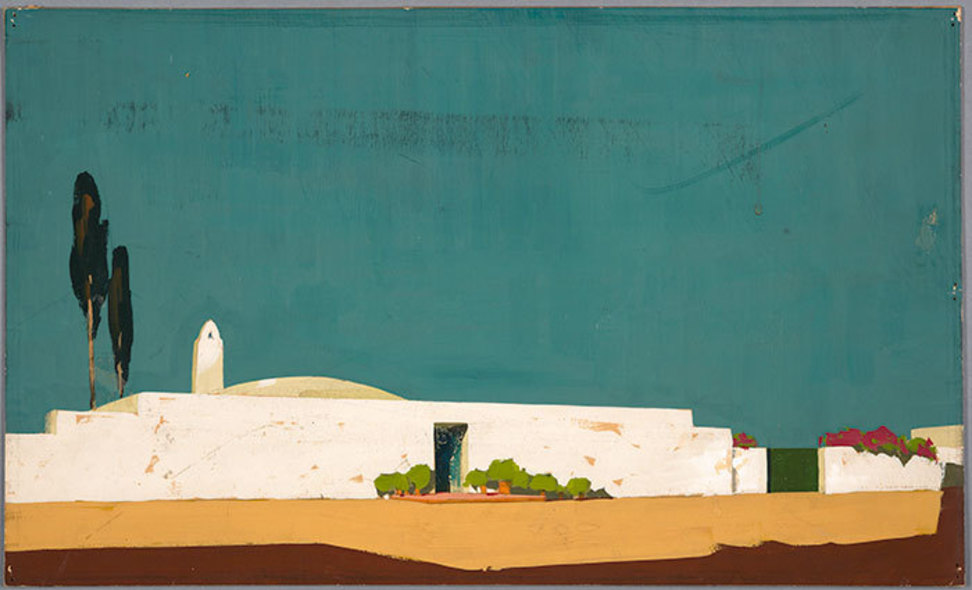 Documenting one of the most creative and influential periods in Southern California architecture, The Huntington Library, Art Collections, and Botanical Gardens this fall presents Architects of a Golden Age: Highlights from The Huntington’s Southern California Architecture Collection. The exhibition will be on view in the West Hall of the Library from Oct. 6, 2018 to Jan. 21, 2019.

About 20 carefully selected original drawings and plans depicting elegant, powerful, whimsical, and iconic buildings will tease out the story of a place and time (1920 to 1940) that was ripe for architectural innovation—with rapid growth and the arrival of new talent from other parts of the U.S. Architects of a Golden Age highlights renderings that helped bring into existence some of the most extraordinary buildings in the greater Los Angeles area, including Downtown L.A.’s Union Station, Mayan Theater, Stock Exchange building, and Chinatown structures, as well as seminal examples of the California Bungalow.

The Huntington’s focus on collecting architectural documentation coincided with the inception of Los Angeles’s preservation movement, which sprang into action around 1978. “For curators at The Huntington, that was the time to actively seek out and salvage as much of the architectural record as possible, as dozens of significant buildings fell to the wrecking ball and the downtown skyline was forever changed,” said Erin Chase, assistant curator of architecture and photography at The Huntington. “This show is an opportunity to showcase our collection, which has become invaluable in the study of the history of the region’s built environment.”

There was a dire need to rescue the records of local architects in the late 1970s, as archives were being destroyed and buildings demolished to make way for redevelopment. The Huntington, with an existing strong foundation of rare architecture book holdings and Californiana, joined in the cause and committed to collecting these records with a concentration on projects in most jeopardy of being lost: those created in Southern California between 1920 and 1940. In the last 40 years, the collection has grown to a trove of thousands of plans, renderings, photographs, and project records that cover not only work created between World Wars I and II, but also before and after that period—representing the evolution of architects’ work over time.

Highlights of Architects of a Golden Age include a charcoal presentation rendering of the façade of L.A.’s Union Station, designed by Edward Warren Hoak, that illustrates his blend of Spanish, Mission Revival, Southwest, and Art Deco styles; and, from the massive collection of the Morgan, Walls & Clements firm’s papers, a highly detailed drawing of the Mayan Theater on Hill Street. The incredibly detailed sketch maps out the ornate 1927 building’s façade, with its stylized pre-Columbian reliefs by Mexican sculptor Francisco Cornejo (1892-1963).

Another highlight is a look at the imposing 12-story granite Stock Exchange building by Samuel Lunden (along with John and Donald Parkinson), which is captured in two striking gouache renderings by artist Roger Hayward—one of the towering exterior, and the other of the vast trading floor, designed by Julian Ellsworth Garnsey with ancient Near East and Native American influences. Completed in 1931, which happened to be at the start of the Great Depression, the grand edifice was designed to impart a sense of financial stability. It was declared a Los Angeles Cultural Monument in 1979 and remains preserved, presently serving as a popular nightclub. “Though Lunden’s is not a household name, The Huntington is privileged to have his papers,” said Chase. “He left his mark across Los Angeles, not only with the Stock Exchange building but also with USC’s Doheny Library and the 1928 wing of the Biltmore Hotel.”

Other important collections featured in the exhibition include the papers of Wallace Neff, one of the most sought-after residential architects from the 1920s through the 1960s. Neff practiced chiefly in Los Angeles and Santa Barbara, creating both residential and commercial buildings in a mostly Spanish and Mediterranean vernacular style that is still widely emulated in the region. The exhibition includes an elevation drawing for Neff’s 1923 Libbey Stables, which was designed for Edward Drummond Libbey, the original owner of the Ojai Valley Inn, along with renderings for an Airform house, Neff’s solution to the mass-housing shortage during and after World War II.

Another group of records in the collection are those of Roger S. Hong, a Los Angeles architect who, along with his father You Chung Hong, was involved in efforts to develop a new Chinatown in the 1930s when the original was relocated to make way for Union Station. Y.C. Hong hired Erle Webster and Adrian Wilson to design several of the buildings that form the core of Chinatown as it is known today. Two of their renderings in colored pencil, as well as a neon light study, will be on view.

Visitors familiar with the California Bungalow will enjoy the Foss Building and Design Collection works in the exhibition that document the company’s residential structures in the Pasadena area in the first half of the 20th century. The firm was one of the most prominent bungalow-style builders in the region, and the exhibition features three original ink drawings of archetypical homes in the Bungalow Heaven neighborhood. “The Foss drawings illustrate all the practical and aesthetic traits we tend to associate with Craftsman architecture in Pasadena,” said Chase. “These early designs took full advantage of Southern California’s weather at various times of the day. There’s a welcoming covered front porch, a screened porch for comfortable indoor/outdoor living, and even a sleeping porch for hot summer nights.”

The recently acquired archive of landscape architects Florence Yoch and Lucile Council is represented in the exhibition by two plans, including one for movie director George Cukor’s 1936 garden at his West Hollywood home. Yoch and Council, who were active from the 1920s to the early 1970s, were well versed in botany, horticulture, and design, and they traveled the world to source ideas. They worked on a range of projects, from the Vroman’s Bookstore courtyard in Pasadena to huge estates, and survived the Great Depression by designing sets for Gone with the Wind, among other films.

Demonstrating a precursor to the golden age of architecture in Southern California, the earliest work on view will likely stop visitors in their tracks: a remarkable six-foot long gouache rendering of Arthur Lett’s Holmby Park residence, made in 1908. Letts, founder of the Broadway department store in Los Angeles, purchased 60 acres in what is now known as Los Feliz, where he built a Tudor mansion and hired William Adolph Peschelt to landscape it with an unrivaled selection of carefully sourced trees, succulents, and other plants. The botanical specimens eventually were dispersed and sold to nurseries and private collectors, including Henry E. Huntington, founder of The Huntington.

As a sort of epilogue to the exhibition, visitors can feast their eyes on a large rendering of a luxurious living room of the post-World War II era. Designed by architect A. Quincy Jones and interior designer William Haines in 1952, the Sidney and Frances Brody residence (in the Holmby Hills area of Los Angeles) brings the exhibition narrative to the edge of the next aesthetic that was influenced by the Southern California lifestyle—mid-century modern. “William Haines’s simply gorgeous interior for the Brody living room is the pinnacle of what can be achieved with California innovation as it enters the modernist period,” said Chase. “It beautifully brings the pre-war history of architecture in the region to an uplifting sendoff.”