Gregg Gibbs
A Taste for the Outré 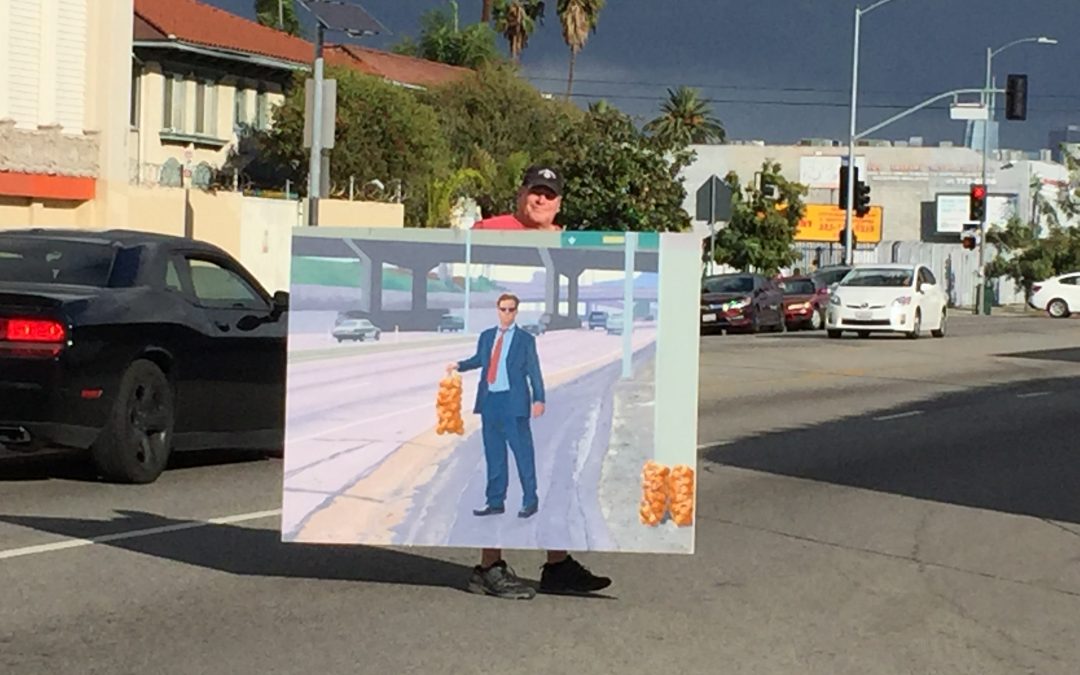 A third generation Angeleno whose recognizable work as an artist, filmmaker, production designer and performance artist veers from the realistic and offbeat to the blatantly bizarre – and whose documentaries include I, Gauguin, The Treasures of Long Gone John and the 2018 Olompali: A Hippie Odyssey – plumbs his own psychological depths only to discover what makes him love work and life.

What historical art figure would you like to have lunch with and why? Oh, boy. Marcel Duchamp. I think he’d be the best. I’d love to play chess with him although I’m very bad. His mind influences me constantly. 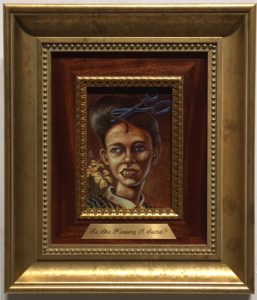 Is She Keeping It Secret?

What did you purchase with the proceeds from your first sale? I probably purchased an airbrush compressor and then re-sold that. What I would like to buy today is a great sable brush – a perfect flat sable brush. That’s what I would buy [but] you can’t get those anymore. It’s difficult, because there are less art stores.

What words or phrases do you overuse? ‘Let me explain.’ ‘Sorry.’ ‘I’m sorry.’ My significant other, my partner, my wife, knows that very well. ‘I’m sorry.’ 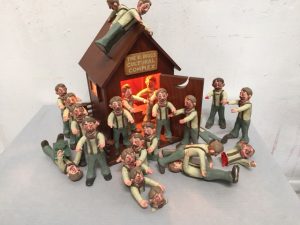 How do you know when a work is finished? I would quote Picasso, who said, ‘Work is only finished when it’s abandoned.’ And that applies to me. I can’t stop until it’s taken away, or I abandon it. I don’t know when something is finished. I’m doing sandwich paintings and I tinker with them constantly. I have a solo show coming up – consider it a pop-up – it’s in the upper rooms of Philippe the Original. I’ve been working for the past four years on painting sandwiches. I’m obsessed with sandwiches, especially the French dip sandwiches. 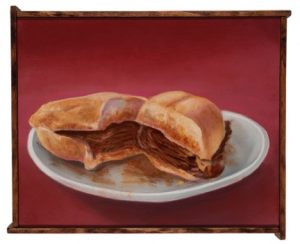 They were invented by the Fourth Earl of Sandwich. He didn’t want to get up from the table to gamble, so he asked this cook to put meat between two pieces of bread. And what is most associated with lunch than the sandwich? It’s the most important vehicle of food distribution that we know. I started painting sandwiches and the most pure sandwich is Philippe the Original. Their sandwich is meat and bread and it’s baptized in blood. They invented the French dip [and] the au jus comes out. As an oil painter, this goes back to bistre – meat juice. That’s what Rembrandt would use to glaze, and that’s the classical formation of oil painting. 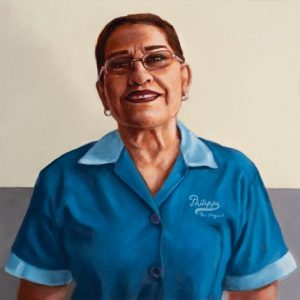 When and where were you happiest? Maui. In the ocean and on Maui.

What is your most treasured possession? A skull signed by Rob Zombie. I designed the set and the whole thing of his first movie, House of 1,000 Corpses. 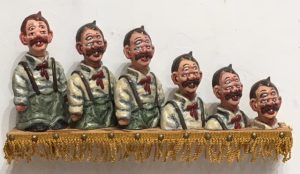 What is your ideal escape destination? Maui.

What’s the worst survival job you’ve ever had? I almost died working as an art dog in the early 80’s making music videos. I was tying down the big brushes of a car wash in a video that was directed by Debbie Allen and it was a nightmare – and then they turned on the car wash. Then there was the time I was carrying handmade Christmas trees at Staples Center for a Britney Spears concert. 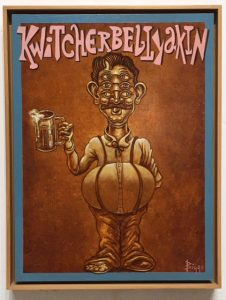 What TV series from your youth best describes your approach to life? Get Smart.

What is your most treasured memory? Maui.

What makes you smile? Not the news today. Every day. Oh my god, it’s driving me crazy. I worked on a documentary about Asia Argento – about the film that Jimmy Bennett was in – The Heart Is Deceitful Above All Things – and then I read in the news about her and him. I’m always up on the news and I can’t believe what is going on – especially with Drumf. I can’t even say his name. 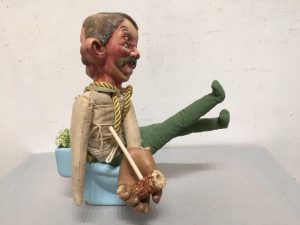 What makes you cry? The news.

What is your go-to drink when you toast to a sale? I don’t drink really anymore. I guess Pellegrino, any kind of sparkling water.

After an all-nighter, what’s your breakfast of champions? An omelet – the perfect omelet, with cheddar cheese and chives. 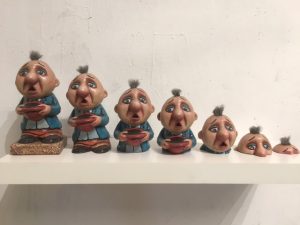 Who inspires you? Anthony Bourdain, and [the late Pulitzer prize-winning food writer] Jonathon Gold. I’m doing a dedication to Jonathon at Philippe and we’re going to put his review on the wall. He’s fucking great. I was so devastated by what happened. I’m also doing a portrait of him that will be in the dedication area upstairs at Philippe the Original. 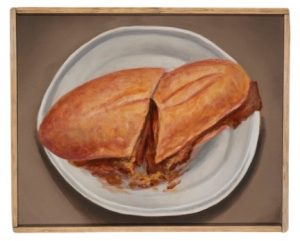 What’s your best quality? I guess cooking an omelet. I don’t know. Cooking. I cook for [my partner] Maura every night. I cook all the time. It’s a big deal. I wake up very early and I prepare it. I missed last week, and Maura did the omelet. It was horrible. Yesterday’s [omelet] was a big day. It was filled with feta and topped with mushroom Bordelaise sauce alongside sweet potatoes O’Brien and maple breakfast sausage. 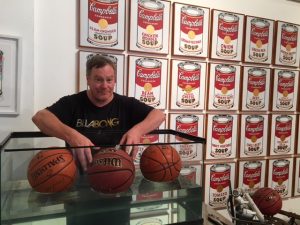 If you could change one thing about yourself, what would it be? I’d have better teeth. 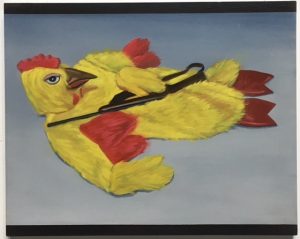 What is your current state of mind? Busy – being busy. I’ve been very busy with all kinds of projects and am trying to keep up. Everything is happening at once. When it rains it pours. 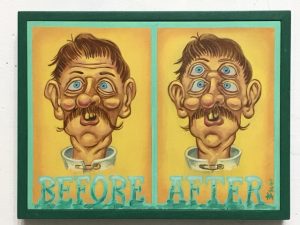 What do you consider your greatest achievement? My latest doc, Olompali: A Hippie Odyssey.

If you were to die and come back as a person or a thing, what would it be? I’d be a panda at a zoo. They have it so easy. They give them tons of bamboo to eat and they walk around, and they’re fun and happy. They don’t have a worry in the world, those pandas. I would be a panda at a zoo. 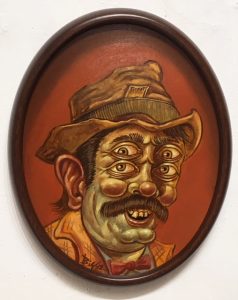 Follow Gregg Gibbs on Instagram.The artist can also be reached at gregggibbs.com