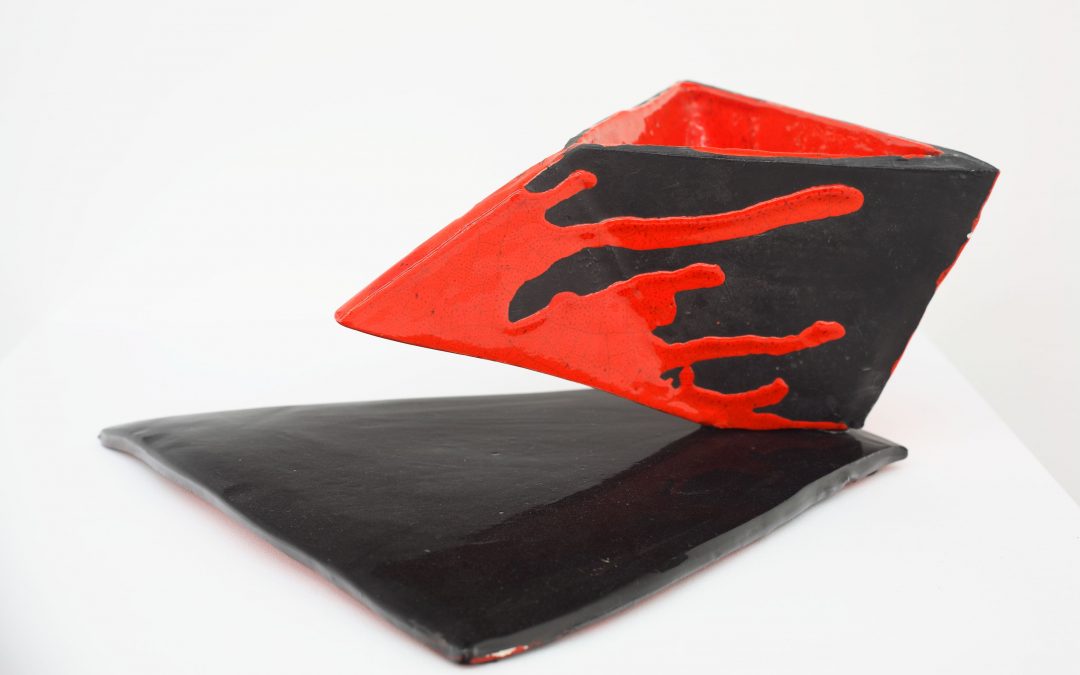 
Mary Heilmann loves color, shapes, abstract forms and ocean waves. The exhibition, Memory Remix, is a voyage through twenty years of her work, showcasing paintings and ceramics, as well as her wonderful, brightly colored cube chairs. Heilmann was born in 1940, studied literature at the University of California Santa Barbara (BA 1962) and received a Master’s in ceramics from UC Berkeley in 1967. 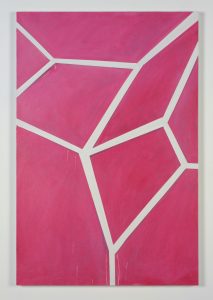 Although she moved to New York in 1968 and has continued to live there, her West Coast experiences continue to inform her work— specifically the patterns and trajectories of ocean waves and their undulations. Within her works are the rhythms of music and waves, as well as the colors of California skies at sunset and sunrise with pink and orange hues, the green hills, and the blues and whites of ocean waves. 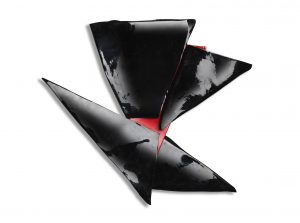 Though her paintings are, for the most part, abstract and non-objective, it is possible to imagine how they relate to actual lived experiences and observations. This is evident in a painting such as Waves and Particles (1989) an irregular shaped canvas in which wide horizontal bands painted both blue and white are bisected by straight lines based on an imagined trajectory. When viewing this work, it is possible to imagine the flow of particles or waves. 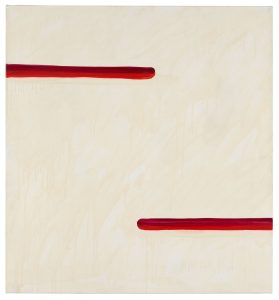 Using this painting as a cue, it is also conceivable to imagine these ebbs and flows in later works, including Pro Tools Remix (2014) and Pink Ocean (2013). Heilmann’s paintings have internal rhythms that perform silent symphonies. Some are even titled after music— Blood on the Tracks (2005), Bob Dylan‘s 1975 album, for example, and Lionel Hampton (2002). In the latter, the composition is divided in two along the diagonal. 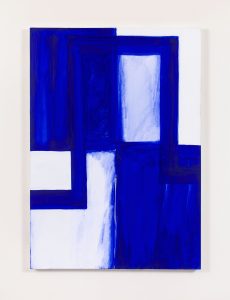 The left side of the painting changes from a field that is yellow at the bottom and green at the top, transitioning from one color to the next as a painted gradient. This background also contains darker green and yellow-toned rectangles as well as pink red, blue, orange, yellow and green circles. These colors are repeated along the right side of the painting as a series of horizontal bands that decrease in size from bottom to top. It is easy to imagine the percussive sounds of jazz when viewing this loose but complexly structured painting. 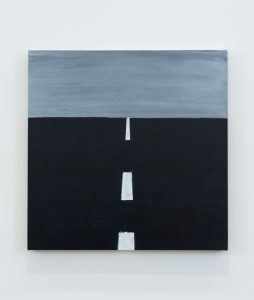 What is most striking, however, about Heilmann’s exhibition is the physical installation and the way the paintings and chairs occupy the space of the gallery, leading viewers on a journey through color relationships. The works are arranged more visually than chronologically. For example, one wall with predominantly red and black geometric paintings from the 1980s is presented in opposition, creating a dialogue with a suite of paintings in a mélange of colors and intersecting shapes. 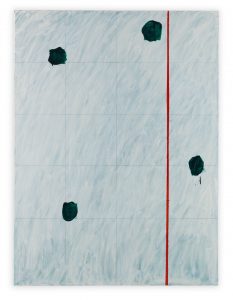 Neo Noir (1998), Overcast (2015) and Driving at Night (2016) hang in close proximity to each other, and are the most referential works in Memory Remix. Both Overcast and Driving at Night allude to the distant vanishing points on receding highways, while Neo Noir resembles an urban landscape at night in which a building facade is colorfully lit from within. 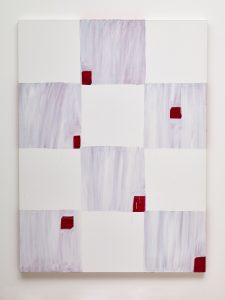 Scattered throughout the large gallery rooms are Heilmann’s iconic chairs on casters— at once sculptures and functional furniture. Viewers are welcome to sit in these colorful and playful yet utilitarian objects, and roll from painting to painting to comfortably contemplate the works. 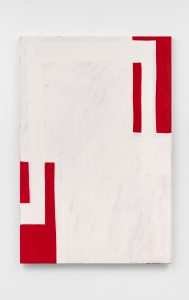 To fully grasp the impact of her work, it is necessary, however, to spend time with each painting and think about its title, the shape of the canvas and the interrelationships between form and color. Heilmann has remarked that her paintings all have back stories, and it is interesting to wonder what the motivating factors are in a painting like the predominantly pink Spider’s Stratagem (1995) or the dripping red over a black-and-white checkerboard ground in Prom (2011). 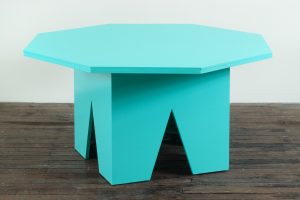 Heilmann combines minimalist geometry with painterly abstraction using a palette of expressive and expansive colors. She is well known for paintings infused with spontaneity and gesture that push at the boundaries of painting, both conceptually and physically. Her work is both conventional and radical, thoughtful and thought provoking, and delightful to behold. It is a joy to experience her magnificent work after a two-decade absence from Los Angeles.