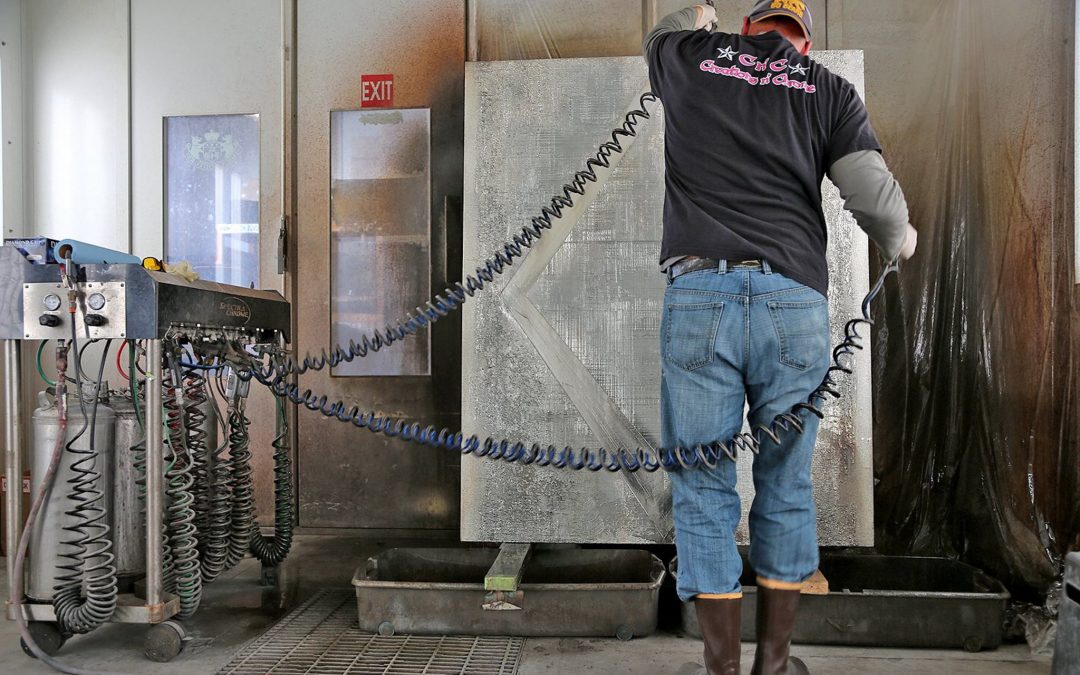 The Newport Beach-born artist whose time spent in New York, Berkeley and San Francisco helped hone is approach to painting – he combines the disparate technical and compositional skills developed during his exposure to printmaking, photography and mixed-media painting in creating his signature silver deposit works  – plumbs his own psychological depths only to discover what makes him love work and life.

What historical art figure would you like to have lunch with and why? Johannes Vermeer. A few years ago I went to the Louvre and was able to see a good handful of them in my face. I was just so taken, and one thing that hit me about him is when you get up close how they’re so abstracted – the zones of light and shadow and how he views alternating primary colors to play off the light. Even though my paintings are very reflective, it’s about the whole light thing that’s involved. I’m also amazed that there’s only 35 or 36 paintings floating around. 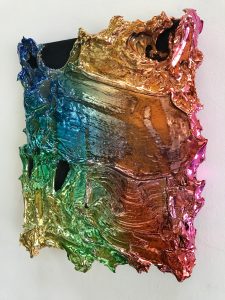 What did you purchase with the proceeds from your first sale? Back in the early 80s I went to UC Berkeley and I’d made a lot of lithographs. I pulled up one [sold it] and I went straight out and bought a stack of printmaking paper. Back then it was $3. a sheet, which was out of my budget. The paper was Rives BFK, because that was the go-to print making paper. I spent my money on that and a couple quarts of beer and went straight back to the print room. 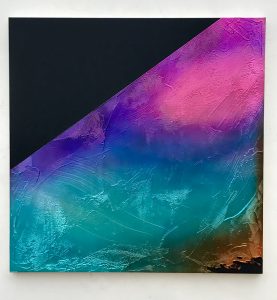 What words or phrases do you overuse? The phrase that I use most is ‘that’s killer.’ You can also throw ‘totally’ in there, too.

How do you know when a work is finished? For me it’s a little visceral – when some magic and wonder come to the surface and I know not to go in and fuck it up. I’m talking primarily about the silver paintings – when you come after the silver, there’s only a few other moves you can make on it. In a way it’s limiting, but I like to take chances. Sometimes I fuck ‘em up and sometimes I don’t. I worked for Ed Moses for five years and he was never afraid to lose a painting. 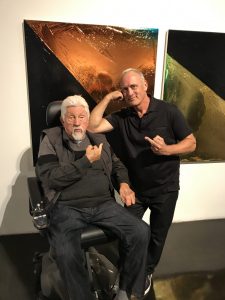 When and where were you happiest? When I’m in the studio getting lost working on a painting. In the early stages, when I’m putting down the foundation – before the silver goes on – I ‘m totally lost and pushing stuff around. That’s the best. 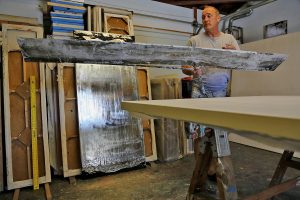 In the studio, photo by Eric Minh Swenson

What is your most treasured possession? When I was living in New York and had dropped out of grad school in 80-something – I drove up to the [Green River Cemetery] in Long Island, where Jackson Pollock and a lot of poets and other artists are buried. It’s a small cemetery, but for Pollock’s headstone there’s a large granite boulder with a plaque on it – the same for [his wife] Lee Krasner. She’s buried behind him with a smaller granite boulder. I happened to have sheets of paper and colored pencils with me, and put the paper over the bronze plaque and took the pencils and scratched over the bronze lettering with the paper. They took his signature – how he signed his paintings – and put it in bronze. I took a couple pieces of paper and put them together. When I got home, I put them in frames and had them ever since. It was a magical day. 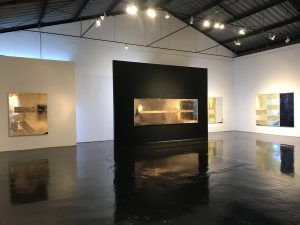 What is your ideal escape destination? That’s easy. My wife and I have two Rhodesian ridgebacks and walking mostly on any beach with her and my dogs is just fantastic. 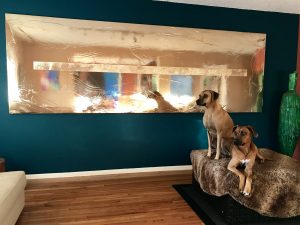 What’s the worst survival job you’ve ever had? Manning the jackhammer in demolition construction. It was brutal. When I got to New York in ‘87, like anybody else, I had day jobs and would paint at night. I did a lot of interior painting with a lot of other artists that I hung out with, and I loaded cameras for a while, but the jackhammer was pretty gnarly. 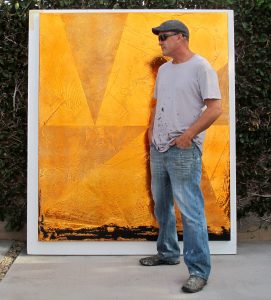 What TV series from your youth best describes your approach to life? My gosh, it’s probably the Wide World of Sports. I don’t really watch too much TV this past decade, but I did watch that when I was a kid. That was me, always involved with sports –  everything from surfing to baseball, and later on I got into rowing, That’s how I got into Cal. We rowed in the estuary up in Oakland.

What is your most treasured memory? Years ago I played golf with my dad and he got a hole-in-one. That was something. I don’t golf anymore, and put those clubs down about a decade ago. 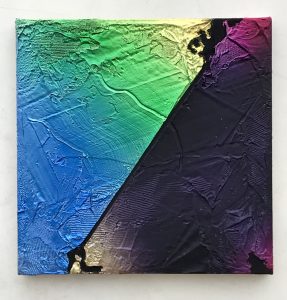 What makes you smile? People helping people. There’s so much shit going on in the world today, that that’s the answer.

What makes you cry? The plight of the world and people suffering. It’s just fucked up. It shouldn’t be happening.

What is your go-to drink when you toast to a sale? Glenmorangie. It’s a Highland single malt Scotch whiskey. It’s extremely rare and I like to drink this 18-year old Scotch. I have to keep it away, or else…

After an all-nighter, what’s your breakfast of champions? That’s an easy one – lots of strong coffee, toast and peanut butter and jelly. I ate a lot of that. I used to live in Alphabet City in New York, and it was pretty slim pickings, but that always seemed to be my staple and it gets me through. I don’t really have those all-nighters too much anymore. 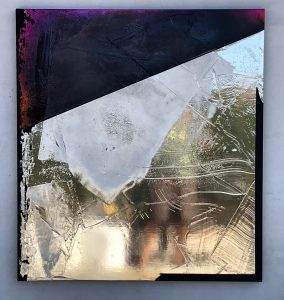 Who inspires you? Mostly just people pushing the envelope in whatever they do in taking chances. Not everything they do, but it refers mostly to artists. There’s a lot of people, but I’m quite fond of abstract expressionists – mostly Joan Mitchell. I love Pollock and would have said him 20 years ago, but Joan Mitchell just kicked all their asses, in my humble opinion, and I’ve seen plenty of her work. I don’t want to get on my horse, but there’s a lot of females in the world that don’t get much recognition – Frankenthaler, too. Some people will poo poo that she came from money, but she fucking made the work.

What’s your best quality? Patience. I can be very patient.

What’s your biggest flaw? Right back to patience. I can also be too tolerant and try and give everybody too much time, too much of a chance, but that’s only because we only want everybody to succeed. Right?

If you could change one thing about yourself, what would it be? I’ve loved guitar all my life and I would be a better guitar player. I do play a little, but only for the past few years. My wife got me a beautiful guitar for Christmas a few years ago and I’ve been plunking on it with some lessons. 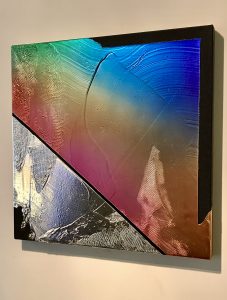 What is your current state of mind? I’m totally firing on all cylinders, because I have a solo show coming up in September at Orth Contemporary in Tulsa, Oklahoma. Katie Orth, the owner, worked for a large gallery in San Francisco for years, but then she moved back to Oklahoma. A mutual friend of ours introduced me to her. I sent her a few pieces and a year ago she asked me if I wanted to open the season for 2018. I got some killer paintings going right now and I’m really stoked. It’s coming up quick and it’s going to be great. 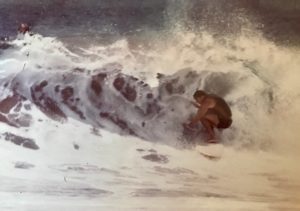 Portrait of the Artist as a Surfer, photo by John Lord

What do you consider your greatest achievement? Escaping death! I was surfing 10-foot waves at a surf break called Hazards in Central California. I had two witnesses – a guy on the cliff was watching and my brother who paddled out with me. He came in, because it kept getting bigger and bigger, and the Bay was closing out. But I kept paddling further out. I made it in, but I got washed up next to this gigantic rock and scaled it. As the white water hit it, I propelled myself over the white water and somehow, some way, some star was shining on me and I paddled in. That was a gnarly day. 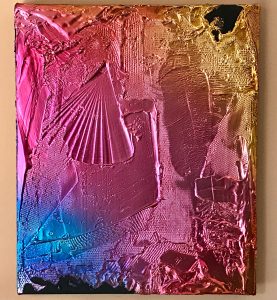 If you were to die and come back as a person or a thing, what would it be? An astronaut. As a kid listening to Hendrix and all those sounds he’d make with his guitar and talking about outer space. I like jets and flying on a rocket being propelled off the earth and floating in a tin can à la Bowie. Just looking at the planet would be a trip – looking down and reflecting what the hell’s going on down there.