Joakim Ojanen: ‘Year of the Dog’
High Art That Makes You Smile 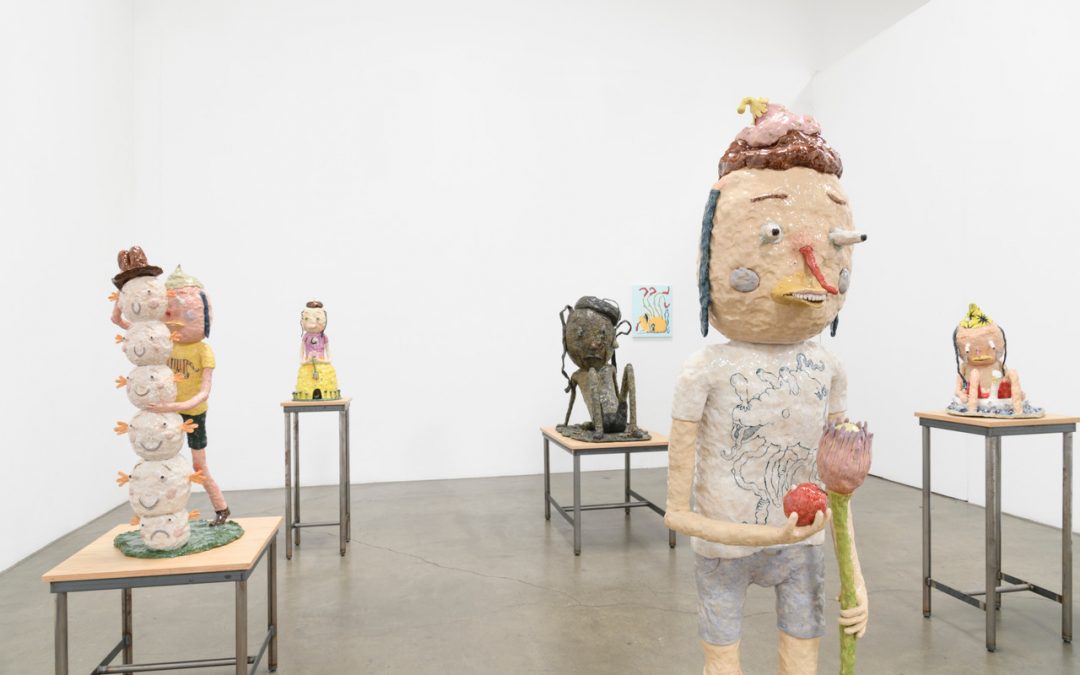 Year of the Dog


Joakim Ojanen is a Swedish artist based in Stockholm. He spent the last few months working in the ceramic studio at Long Beach City College to create many of the pieces in his current exhibition,Year of the Dog. Ojanen has filled the gallery with these ceramic sculptures, as well as drawings, paintings and bronze casts— all of which depict quirky, cartoon-like, part-human/part animal figures. These works have an immediate appeal. They are simultaneously seductive, melancholic, comic and tragic. 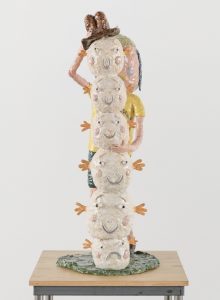 This ambitious installation includes a freize of charcoal drawings, a suite of paintings, two bronzes and more than 33 ceramic sculptures that range in size from just a few inches to over 50 inches high. Upon entering the gallery, it is hard not to first gravitate toward a rectangular group of tables where sculptures including Octopus Ballin’ On Home Stone with Little Guest (all works 2018) are situated. Octopus Ballin’ features an octopus perched on a tall, dome shaped grayish stone. Its long tentacles dangle and one of them holds an orange basketball. The frowning octopus sports a hat and has long white tears streaming from finger-like eyes that extend from the creature’s face. 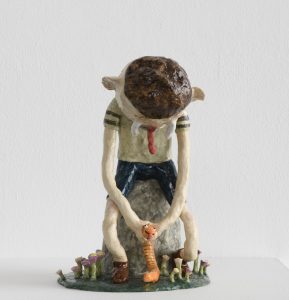 Boy on Stone with Orange Snake

Surrounding Octopus Ballin’ are many other figures, each with its own range of expressions, postures, emotions and double meanings. Boy on Stone with Orange Snake is similarly sad but also menacing. Bent over intently, this boy with a long red nose, wears shorts and a t-shirt. Seated on a rock, he stares down at a bright orange snake he has captured between his hands. The table also includes I’m a Dog Person Boy with Happy Dog, a long eared, duck-beaked human-animal hybrid feeding a bone to a yellow, four-legged dog with bright red shoes. The charm and appeal in Ojanen’s figures comes not only from their weird innocence and presumed naivete but also from Ojanen’s use of glazes and the detailed way he depicts clothing to fuse the essence of the ceramic medium with realistic renderings of camouflage shorts and logoed tees. 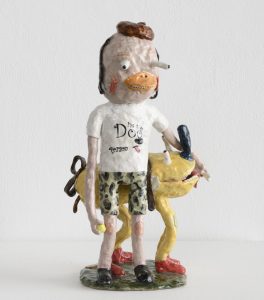 Surrounding these creatures is a suite of charcoal drawings, each depicting bulbous, intestine-like people and animals. These untitled, though dated drawings, are like self-contained comics, each with its own inner narrative of play, desire, attraction, humor and mayhem. 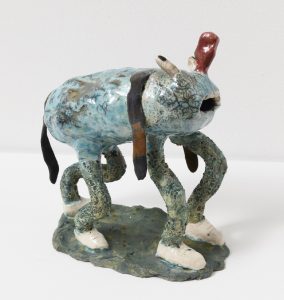 In the back gallery are Ojanen’s larger sculptures and paintings. The paintings are colored versions of the drawings in which Ojanen has filled in the charcoal outlines with muted colors, and set the figures against solid green and blue-toned backgrounds. Dead Dog with Red Boots is a two-dimensional version of the dog from the ceramic I’m a Dog Person Boy with Happy Dog, though in this painting, it is dead— lying upside down with its legs in the air. These paintings are amalgamations of human and animal parts that express varied emotional states, both positive and negative. 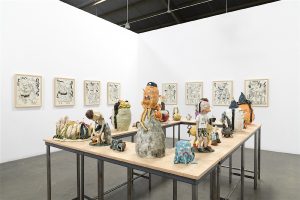 The ceramic and bronze sculptures in the back gallery approach human-scale and are presented on individual pedestals that resemble metal worktables with wooden tops. The 54-inch Boy with Thistle Flower and Apple stands tall. His part dog, part duck part human face gazes absently across the room. He holds an apple in one hand and a long-stemmed flower in the other, seeming  both insecure and stoic standing with only one shoe, on a small green circular base. In Finishing Touch on New Sculptures a similar looking boy wearing a yellow t-shirt and blue-green shorts puts a brown hat atop a column of heads. Five are smiling, but the one on the bottom frowns, perhaps from the weight of the others? 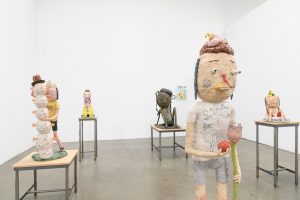 While Ojanen’s larger sculptures have life-like qualities, it is the smaller works that delight. He is able to imbue these three to four-inch high ceramic heads— with sad eyes, long noses, drooping dog-like ears and quirky smiles— with a wide range of human expressions. These works allude to (and can become) companions with whom we share instant and long lasting emotional bonds. 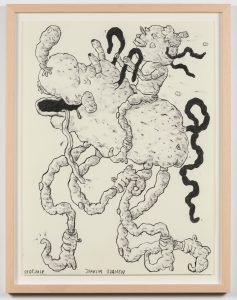 They make one smile and there is nothing better than that!

Photos courtesy of the artist and Richard Heller Gallery. Photography by Alan Shaffer