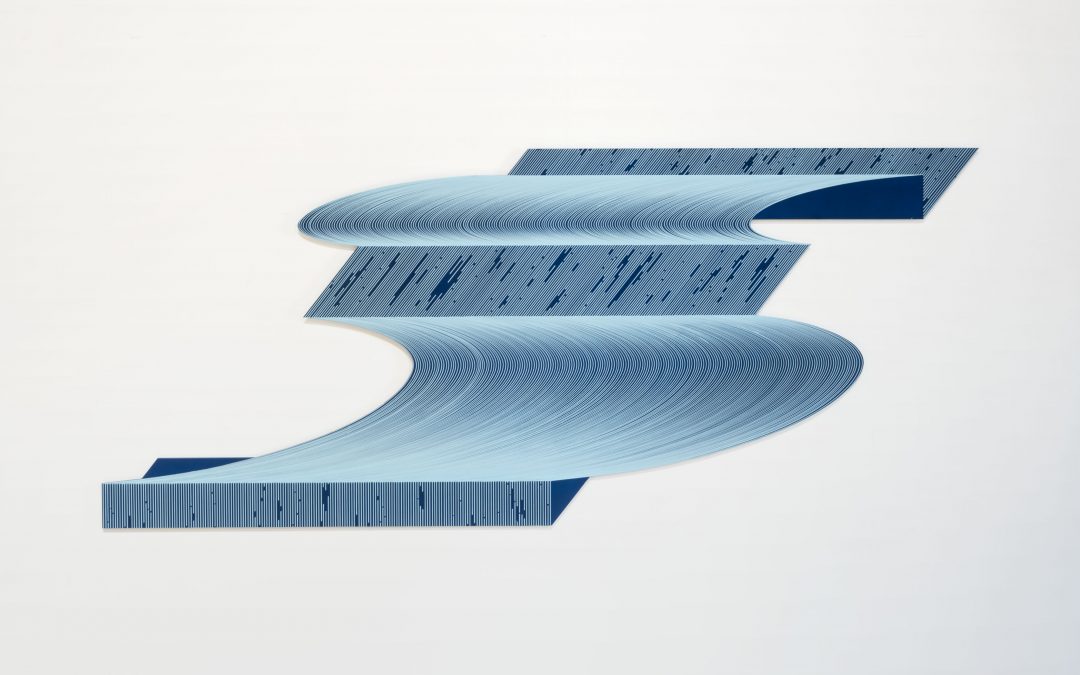 
In Visual Field, Katy Ann Gilmore presents painted objects that conflate two-and-three-dimensional space. Having studied both art and mathematics, her works are carefully considered and deliberate investigations of how lines can create and define illusionistic space. Gilmore’s process is to paint thin horizontal lines using acrylic markers onto irregularly shaped Dibond panels. These strokes follow the contours of the shapes to articulate folds and catenaries (a curve formed by something hanging from two points to form a U shape). Though flat, the pieces allude to dimensionality and describe receding spaces. Gilmore uses a limited palette— black, white, gray and blue— yet her works suggest infinite possibilities. When a piece of paper is folded it becomes an irregular shape with intersecting creases and shadows. Gilmore translates these elements into a single plane where front, back and shadows are painted in different tonalities and angles to allude to the physical form. In Fold Number 10 (all works 2018) a succession of almost touching vertical blue lines populate what could be construed as the front side of a flat rectangular surface. This plane is bisected by gray triangles representing flaps or folds across the surface. In the middle, Gilmore carefully paints a shadow— by darkening the tonalities— where a fold crosses the main shape. A similar perspectival shift occurs in Fold #13, where what appears to be a blue striped page receding into space is depicted as a trapezoid with folded top and bottom corners. She presents this object as a multi-sided, yet flat shape. Gilmore creates optical illusions to represent linear perspective and catenary curves. In large-scaled pieces including Catenary Skew Number 2, Catenary Drip Number 4 and Catenary Drip Number 3, numerous concentric lines define shapes that appear to extend from the wall into three-dimensional space. These forms are both complex and graceful as they transition between the curved and rectangular. The spectacular Fold # 14, is over fifteen feet long and occupies an entire wall. Here, Gilmore interlocks multiple panels of Dibond that fit together like a puzzle. The piece describes a zig-zagging horizontally-striped wall backed in black. Rather than present this form in perspective on a page, she cuts the contour of the entire shape out of Dibond— a thin paintable substrate— giving it a sculptural presence. The work appears to jut out from the wall, when in reality it is flat. In a site-specific installation entitled Visual Field, Gilmore complicates the illusion by creating a three-dimensional sculpture in the gallery’s back room. Here, built perpendiculars extend from the gallery walls into the space, their patterning continuing onto the floor. As viewers traverse the piece it feels as if one has entered into a pared down version of M.C. Escher‘s world. While Escher painted illusionistic and impossible spaces, Gilmore fabricates an architectural intervention that alludes to a maze of barriers and walls. Her minimal presentation of complex geometry is arresting, puzzling and ultimately a satisfying challenge to unravel and understand.