Valerie Green: ‘Gray Area’
Rooted In The Digital Ethos Of Our Time 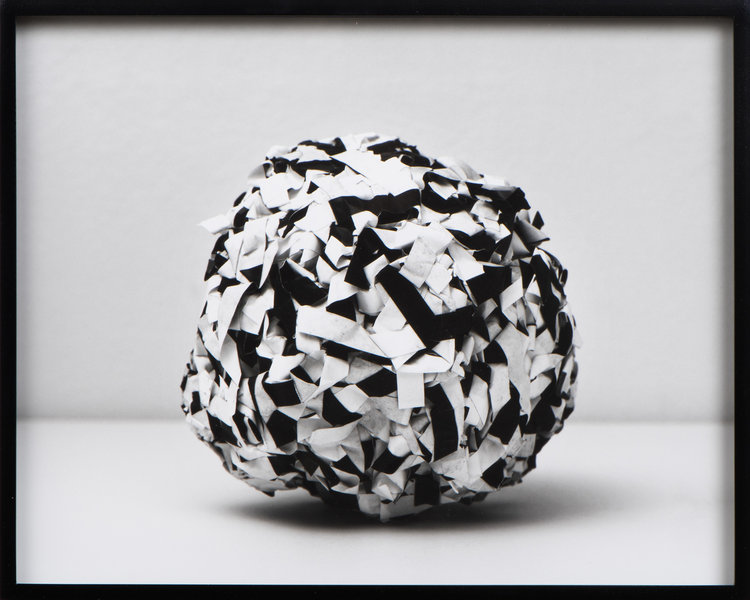 
Before the invention of Photoshop, photographic illusions were painstakingly created by arranging objects to align in intriguing ways within the lens of a camera. They required complex calculations as well as an understanding of how three-dimensional objects will appear on the flattened, two-dimensional picture plane. Photographers including Zeke Berman, Robert Cumming and John Pfahl experimented with these types of in-camera illusions while others like Frederick Sommer and Jerry Uelsmann played with multiple exposures. Photography has long been a medium that invites expansive experimentation. With the onset of digital technologies, the options and possibilities have become infinite. Artists such as Valerie Green are interested in creating images that blur the boundaries between analog and digital processes in her complex and compelling work. Don’t Stand So Close To Me

In the software program Adobe Photoshop, the selection tool defines the boundaries of an area within an image with an animated, dashed line: the so called marching ants. In her current body of work, Gray Area, Green extracts this dashed line from digital space, transforming its exact proportions to rolls of custom fabricated sticky tape which she then uses to create patterns and define borders in physical space. Many of her tape-constructions are made inside gray cardboard boxes (that once contained photographic paper). These drawings/assemblages are photographed and eventually output as large pieces of black-and-white film and then contact-printed in the darkroom. While Green starts by making something physical, she often digitally augments the image. The end results are traditional silver prints that are derived from both digital and analog processes. Gray Area is not the first of Green’s projects that looks at the relationship between the digital and the analog, but rather a continuation of an in-depth, ongoing investigation. Green purposely creates confusing images that ask inquisitive viewers to try to decipher exactly how her photographed spaces and digital interventions intersect. In Look Up (2014), for example, she photographed the sky through the moon roof in her car, using a cellphone camera. In these pictures of rain, as well as blue and cloud-filled skies, she confused the space by attaching a scratched and worn iPhone screen protector to the glass. The shape referenced by the screen protector became the central focus of the image — something at once familiar that also functioned as a lens to strangely distort the image of the sky. Running Up That Hill

Green’s layered images are infused with multiple references of meaning. That the photographs in Gray Area are named for pop songs from the mid 1970s to the mid 1980s (her generation—born between 1977 and 1983 —known as Xennials), speaks to her interests in connecting the present with the recent past. For those who grew up listing to music of this period, the titles add a touch of nostalgia. A song by The Police, Don’t Stand So Close To Me (all works 2018) introduces the exhibition. This photograph depicts 13 imprecise rows of dashed-line tape spanning a gray background horizontally. The lines also surround the perimeter of the image, whose shallow depth turns out to be a box. As some of the tape is tight across the box and others are more loosely hung, the shadows and quirky placement of the lines contradict the precision of Photoshop. Lit straight on from just above the camera, this is a photograph that could only be constructed in the analog world. In other photographs, including Let’s Dance, Maniac and Running Up That Hill, Green configures the tape in many ways: up, down and as squiggles within the textured gray background. In works like Take On Me and Smooth Operator, she complicates the process by offsetting and overlaying digital selections of the picture atop the original image. In Take On Me, for example a triangle overlay with dashed-lines interrupts the tape-lines that run diagonally across the surface below. While this could be a photograph of two constructions, Green montages the images using the computer. Digital manipulation comes into play more obviously in Physical where a fat, computer generated, linear swoosh inverts the tones of the image below it, creating an ambiguous figure ground relationship. Green also uses her dashed-line tape to create shapes at the intersection of a generic floor and wall. Here the tape more closely replicates its function in photoshop, yet Green is never one to create something with an obvious one-to-one relationship. In Sunglasses At Night, for example, a 5-sided trapezoidal portion of the 4-sided shape defined by the tape is selected (in Photoshop) and the tones are then inverted: white becomes black, light gray becomes dark gray, etc. Green presents six of these part analog/part digital constructed illusions, each displaying different levels of complexity and geometrical configurations. The closing shot (or last image Green created), Everybody Wants to Rule The World (a 1985 song by Tears for Fears, cover image), is a portrait of all the tape she used in creating the other images, rolled up into a ball. As there is nothing digital about this final image, it serves as a humorous comment on the reality of analog waste. To complement the exhibition, Green created a playlist of all her song titles that can be accessed on Spotify, that allows viewers to hear the music that inspired the images. This is a curious and in many ways considerate gesture — a trip down memory lane for some, and an introduction to music of a bygone era for others, yet 100% rooted in the digital ethos of our time.