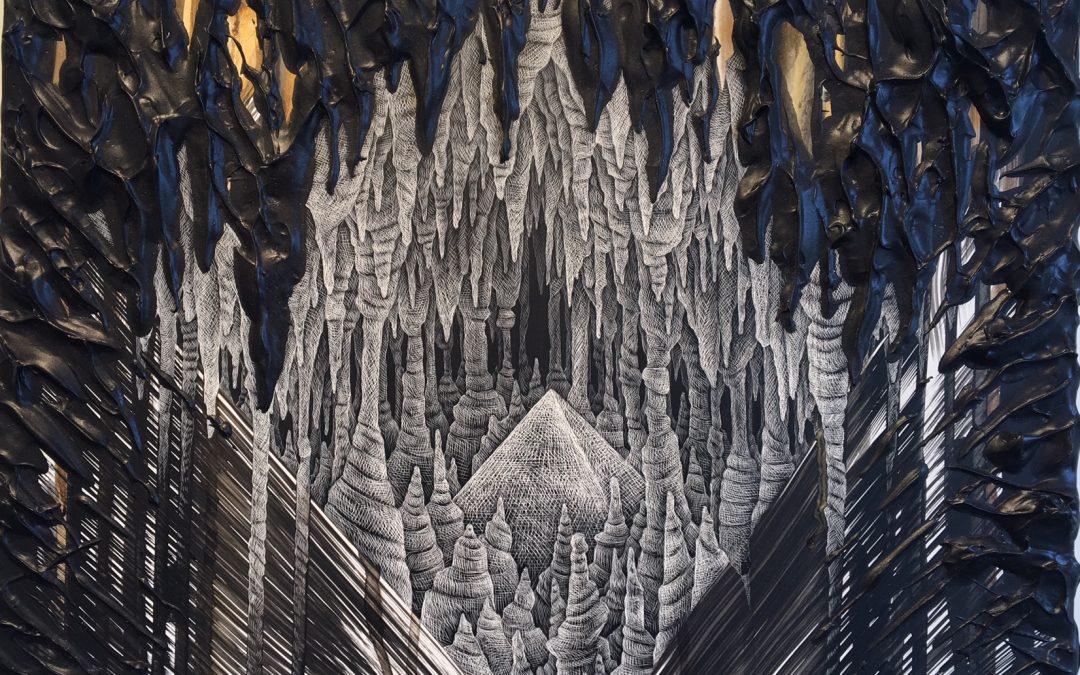 Edge of the World

Previously having focused on more abstract renderings of ink and acrylic on paper, Berg has instilled these new works with what the gallery describes as a “lifelong obsession with extreme weather and geology” in a more literal way, through a system “she equates with geological layering and excavations.” Acrylic, plaster, wire, mesh, and wood come together to create scenes of natural wonders. Her foray into building up material on top of canvas began, however, several years ago (think back to, for instance, 2013’s El Diablo de  Los Angeles). Works small and large are hung side by side in this exhibition. Multiple mediums are used, leading Berg’s creations to exist somewhere between sculpture and painting. Both realistic and not, her fantastical, nearly intergalactic pieces capture, as the gallery writes, a chaos “emblematic of our anxious age.”  This chaos could be seen embodied, for example, through her use of “pyramids as symbols of transcendence, providing an ancient human context within this shifting natural tangle of lightning and lava.” Works such as Mysteries of the Inner Earth exist like relics found in the tomb of a pharaoh; gold shards self-assuredly jut out of a beautifully-painted pyramid. Like ancient icebergs from a previous geologic age, Winds of Change shows sculpted snowy mounds encapsulating vague crevices painted on canvas. More overtly material statements include Golden Electric, in which fabrics like iridescent film are employed to invigorate a colorful, textured and metallic lightning bolt. Volcanoes also frequent the walls of the exhibition, a motif particularly appropriate at this moment in time, given that in early May, Kilauea, the most active of Hawaii‘s volcanoes, erupted. Following a trip there several years ago, during which time she walked amid the lava of these very formations, Berg was inspired to work around the theme of natural disasters, and is interested in “presenting them in a way that is beautiful and sublime while simultaneously ominous and posing questions about humanity’s role in all of it.” The grandeur of metallic volume also grants an other-worldliness to the works, but their insistence on framing natural occurrences makes them all too real, and inherently, a bit uncomfortable. Nighttime at Kilauea almost foreshadows the current disastrous eruption of that volcano – a consciousness not received from intake of media, but from being physically, emotionally and artistically invested in this earth. Like meteors or comets with reflective and radioactive surfaces, these pieces are familiar but feel as though they could have traveled in from outside of this astral-like atmosphere. Explorative of the very forms and phenomena that establish and disband the world we inhabit, these works intimately command viewers to consider their own place within such power, force and enduring sublimity.