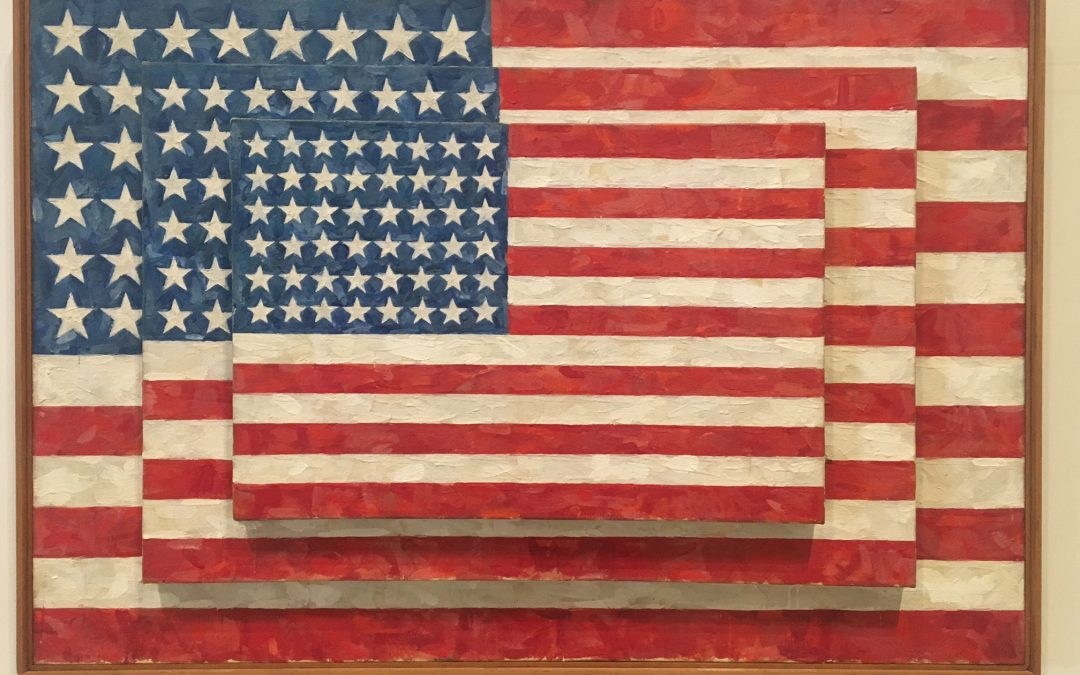 
The Broad’s latest special exhibition features the work of Jasper Johns, who, at 87, is considered one of America’s greatest living artists. Something Resembling Truth is a hard-hitting, polished whirlwind of a show that features more than 120 pieces spanning the course of six decades. Organized thematically rather than chronologically, it is a collaborative display of one man’s “investigation of the visual world and the human response to it.” The show begins with the artist’s instantly recognizable flag paintings: layered, juxtaposed, re-colored. The press notes state that “by appropriating widely recognizable signs and symbols, Johns sought to make the familiar unfamiliar, inviting viewers to look more closely at what he calls ‘things the mind already knows’.” This exploration continues with pieces such as Numbers, Target and Map. Moving into works that possess a self-conscious corporeality – his catenary pieces are symbolic of this paradoxical relationship – they insinuate space in a representational way with an object traditionally used in physical and geometric settings. Catenary (I Call to the Grave)

Another theme Johns explores is the relationship that the artist believes exists between letters and perception. Decontextualized, the words plastered on the painting surfaces become something to be looked at rather than heard. He desperately aims to make sense of our perceived reality through methods described as “disorientation and disintegration.” Etching, painting, and sculpture are united, as Johns plays with layers of consciousness in a physical way, employing, for example, forks as representatives of consumption. In the room dubbed, Time and Transience, Johns’ deft handling of crosshatching pieces is on full display (eight such works are in the survey). Colorful lines systematically occupy the canvas, a design that Johns has said of having, “all the qualities that interest me – literalness, repetitiveness, an obsessive quality, order with dumbness, and the possibility of a complete lack of meaning.” Still other works feature the physical things that informed and constructed them. Many include “painstaking reproductions” of studio and household items, including brooms, teacups and books. Here the artist again attempts to decode objects by constructing them from scratch and re-contextualizing them, guiding viewers to see the regular as the experimental. The room, Fragments and Faces, explores Johns’ representations of the human form and his own body through wax casts, impressions and imprints. An exploited cultural icon in its own right, the human body is not immune to Johns’ analysis. As in the unmistakable Watchman, which features a wax cast of a human leg, seated on a chair, hanging upside down at the top of the canvas, human experience is analyzed through a corporeal lens. Fragmented, the human body’s experience becomes suspended, hyper focused, and re-situated. In the series Seasons and Cycles, described as an “allegory of the four seasons and the corresponding stages of human life,” Johns’ focus is as contemplative as that found in his earlier works, if not perhaps even more personal and existential. Shadowy figures, geometric shapes, unmistakable cultural icons, crosshatches and snippets of modern art masterpieces all meet again here. Approaching the end of the 20th century, these works emphasize repetition through composition and coloring and content, and lead viewers to question when things begin, when they end, and how that is dictated. In the final room, Memory Tracings, are some of Johns’ latest works: tracings, floor plans and more catinarys. Johns mounts recognizable images atop tools of practical and industrial nature, using those very tools to obscure and create vague impressions on the canvases. The press notes state that all the works in this exhibition “examine how the act of seeing informs, and is shaped by, thought and feeling. Challenging our senses and encouraging new ways of thinking about and experiencing the world, all of Johns’ works- in the artist’s words – strive to achieve “something resembling truth.” Seeing works that are rarely exhibited alongside one another, one gets a sense of the themes that repeatedly have influenced Johns and, by turns, how Johns has greatly influenced others. Indeed, many of his works allude to his relationships with other artistic and literary pioneers, among them Samuel Beckett and Robert Rauschenberg. Johns was given the Presidential Medal of Freedom in 2011, making it clear that the contemporary artist is more than a reproducer and appropriator of pop culture. Truth is something rooted in familiarity, for what is seen is accepted as real, but by dismantling that human reality, Johns opens up new layers of discourse within his work. This exhibition demonstrates that Johns is an explorative inquirer, questioning and metamorphosing the physical and ideological worlds in which we live. In the words of the New York Times’ Deborah Solomon, Johns’ goal, it seemed, was less to convey a message than to circle cryptically around it.