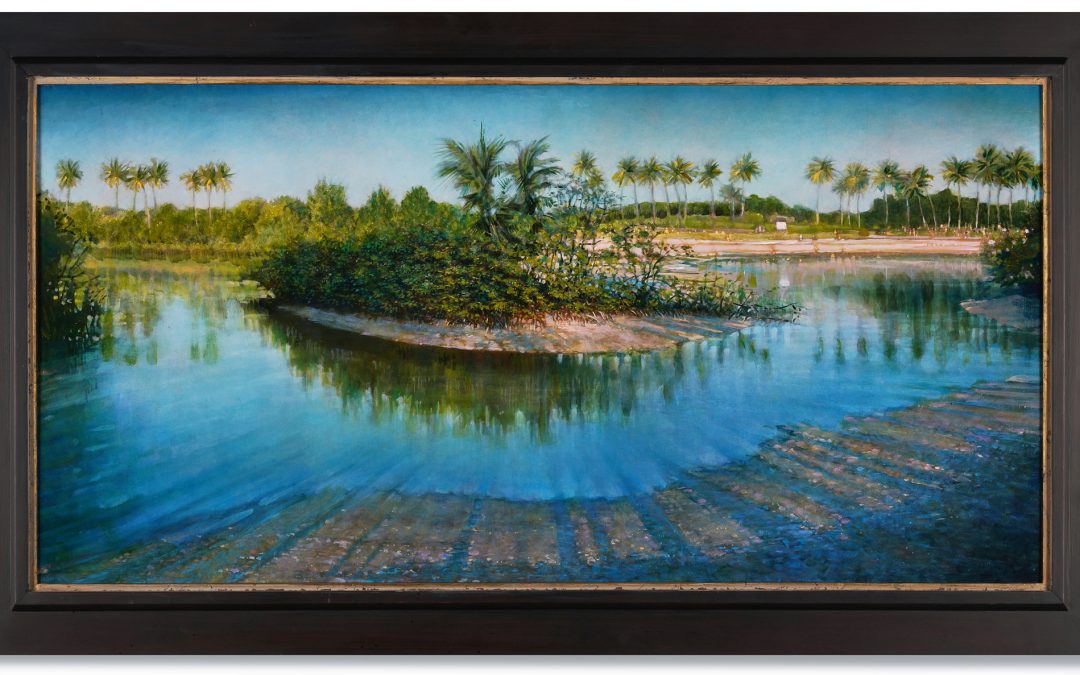 
In many ways, painter Mark Innerst could be considered a contemporary modernist. His works align with American painters like Charles Sheeler and Joseph Stella that were active in the late 19th and early 20th centuries, who celebrated cities and industrial societies. While his paintings of the natural and urban landscapes depict recognizable places, the works transcend these specificities, becoming abstracted meditations on light, texture, shape and color. At heart, Innerst is a formalist, interested in framing the observable world, transforming what he sees into glowing fields of color. View From A Hotel Window

Innerst has been exhibiting his small and lushly realistic paintings since the mid 1980s. Early on, he was loosely associated with the Pictures Generation, although his work was not directly related to appropriation. Although he shows his work on a regular basis, it is rarely seen in Los Angeles. On view at Kohn Gallery are more than 25 new works— sublime images of the natural and built environments. Whether Innerst paints the urban or natural landscapes, the works have an internal light that has an eternal quality. The current subjects range from freeway overpasses, building facades and city high-rises at night, to crowded subways and train stations. Also included in this exhibition are a few paintings of nature, as if to say, ‘I can paint nature with the same dexterity as the man-made world, and yes, I venture from the city from time to time, and look what I see.’ Innerst’s paintings of nature have the same detail and intensity as his cityscapes, although they are often filled with blue skies and open space, rather than being close cropped images of urban life. Both Lagoon and Bathers and Duboise Park (both 2018) portray beautiful locations filled with distant palm trees and shimmering water— evoking a vacation paradise. In his cityscapes, Innerst undeniably delights in the patterns of urban facades. His cities are carefully composed so that the geometry of receding streets and flattened buildings exist in perfect harmony. While representational, the works hover toward abstraction. In Saint Marks in Partial Shadow (2018), his hazy and atmospheric modeling between translucent colors is often contrasted with more hard-edged shapes (as in building facades) and points of glowing lights. Tall buildings in pink and orange hues flank both sides of the composition leading the eye toward an open horizon. The cars and storefronts in the foreground are painted a deep blue in contrast to the sparkle of yellow and orange head lights and street lamps. While Saint Marks in Partial Shadow depicts the city from afar, Tiffany (2017) flattens the urban landscape into an abstraction. Here, Innerst creates an homage to Mondrian depicting the skyscrapers as red, blue and white rectangles. Spectra (2018), one of the larger canvases in the show at 48 x 48 inches, is a shimmering array of striated lines — a collage of the pulsating lights on the facades of myriad buildings. The all-over pattern presents the beauty of the city at night. In contrast, Innerst’s images of life below the city— underground platforms and train station interiors— are filled with a haunting and eerily macabre blue tonality. Here, anonymous individuals and crowds of people gather while exiting a station or waiting for their transportation to arrive. Innerst’s depictions of these underground settings are claustrophobic yet not without hope as they are flooded with artificial light. Seen together, Innerst’s paintings exhibit a wide array of impressions of a city and its surrounds. The works present abstracted facades, magical vistas with spectacular shadows and light, as well as interior and underground spaces filled with anonymous strangers. In Innerst’s works people, freeway overpasses, windows, buildings, streets and even palm fronds are props—vehicles through which he can explore his true subject— paint and how light, shadow and refined brushwork can define form.