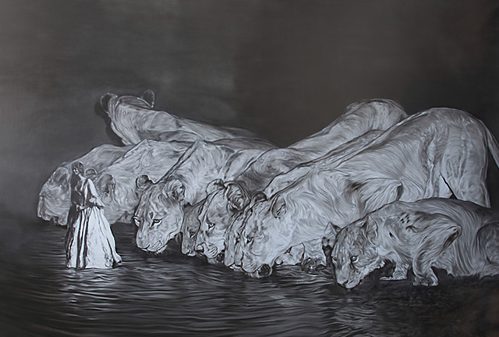 
Oh You Pretty Things is an ironic title. While Stephan Balleux‘s paintings could be construed as pretty, it is more a reference to the women who populate the compositions than to the totality of the depictions. There is something disturbing and haunting that predominates these images. In Suspension First, (2018) a large-scale oil painting colored to reference a sepia-toned photograph, a woman floats through the air. She hangs by her foot from gym rings, her body posed as if a bird in flight moving horizontally across the canvas. The painting is surreal and ambiguous. And, upon close examination, when it becomes evident that the subject is missing a hand, the image takes on a perplexing air. Is the work unfinished? Why did Balleux leave space for the hand yet not depict it? Who is this incomplete figure? A similar discomfort persists in Pandora, (2018). Here the realistically rendered black and white scene features a young woman with long curls wearing an old-fashioned dress kneeling in the landscape. She sits among plants and grasses oblivious to the twisted trees and dream-like swirls behind her. In one hand she holds a rectangular card with a vignetted image/transparent hole in its center. The size and shape of this circle parallels the size and shape of the stump of her missing right arm. This Pandora, depicted as maimed, might have already experienced the contents – and consequences – of opening Pandora’s box. Another monochromatic painting, The Lioness (cover image, 2017), portrays a woman in a long dress wading in water that is receding from the shore. Her back is to a pack of giant lioness’ sipping at the water’s edge. Their eyes are on her, yet she seems oblivious to any danger. This surreal image, like many of Balleux’s works is a composite of disparate sources. As Dominique Païni has suggested (in Stephan Balleux: The Painting and its Double, Editions Racine, 2014), Balleux’s “way of painting starts with a collection of already existing images, whereby he does not ‘paint’ so much as assemble. His real and entire aim as a painter is to disfigure.” His paintings share a kinship with the macabre photographs of Joel Peter Witkin who often photographed disfigured models. Like Witkin, Balleux is interested in creating beautiful images of disturbing subjects. He also draws from Gerhard Richter in his use of monochromatic photo realistic depictions. The Companion in Pearls

Two other paintings on view featuring a full color palette, The Guardian and The Companion in Pearls (both 2018), pair Balleux’s women with birds. In The Guardian a huge predatory bird is perched on a tree branch floating in a bright blue sky. A doll-sized barefoot woman, also dressed in sky blue, hugs the bird’s front leg, her entire body embracing its lower extremity. It is unknown whether their relationship is symbiotic. The Companion in Pearls is equally fascinating. Here, a woman in an evening gown with several long strands of pearls sits at a table staring out at the viewer. She is surrounded by realistically sized birds— two that stand on the table alongside an empty wine glass, while the others, brightly colored parrots, frolic on the branch of a tree. While the birds appear to be aware of the woman, she pays no attention to them. Balleux’s paintings, while exquisitely rendered, have an unsettling aura. The works are both surreal and unreal. He depicts humans and animals as believable characters with ambiguous motivations. While the paintings are captivating and seductive, they allude to narratives that never quite resolve on the canvas or in the viewer’s imagination.