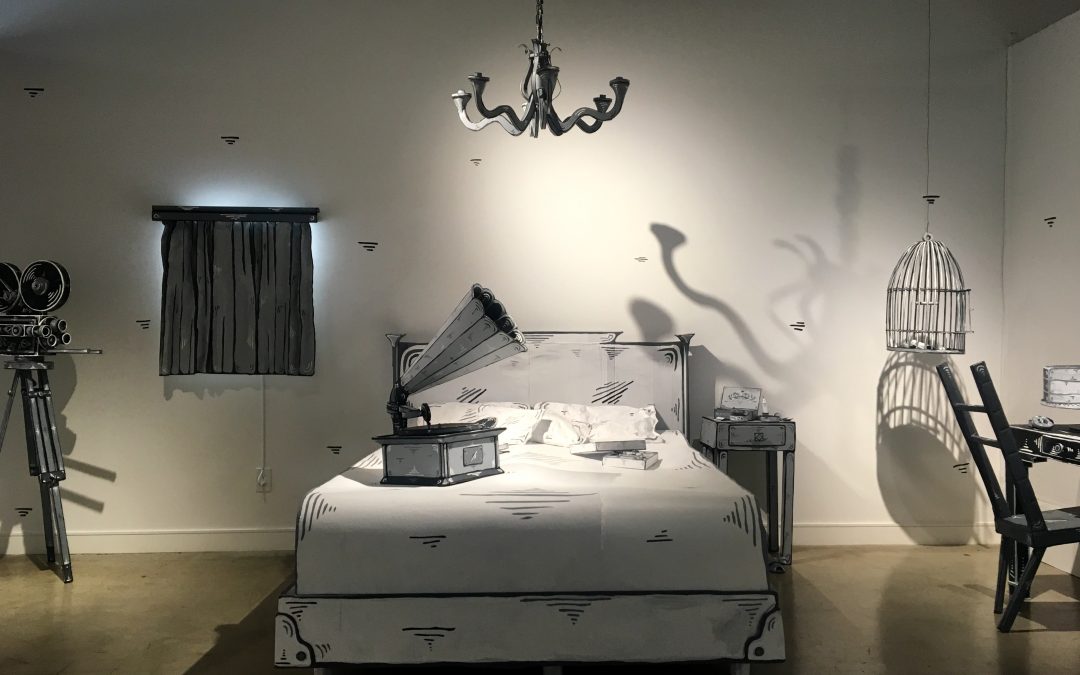 
Prepare to be transported: to another time, another place, another dimension – and not courtesy of Twilight Zone’s Rod Serling. A hotel seemingly apt to house both the lavish and the libertines is the latest creation by Dosshaus, the artistic duo otherwise known as Zoey Taylor and David Connelly. Upon entering Corey Helford Gallery, a large sign greets visitors with a grey “Vagrancy,” a marvelous wordplay on “Vacancy” and one immediately gets the sense of having stumbled upon a ghost-like aspect of the normal world. Yet there’s something a tad off about the place: For starters, everything is grey, black or white, and upon closer inspection, one realizes that everything is made of cardboard. Conflicting feelings intoxicated this visitor as she stood in a place so full of traces of life and yet one so static and lifeless in nature. A front desk replete with a call bell, abandoned magazines and sets of keys introduces the hotel, with the lobby area decorated with sofa chairs, a television, a game of chess, and a copy of “Death of a Salesman.” Roaming through the exhibit, one cannot help but wonder who could occupy the spaces that are repositories of voyeurism. The narratives underlying each room are classic: that of an heiress with a drug problem; that of recklessly abandoned star-crossed lovers; and that of a nomadic musician forever searching quaint towns for the secrets to his soul. Each room is adorned with apt gizmos – a gramophone, a gun, a ghastly poster. Had there been any clear indication that this was a hotel and not an elaborate fabrication, it could just as easily been a home, albeit a home with rooms close in proximity and strangely eclectic in personality. These thin walls are deliberate and emblematic of the near-nonexistent barriers found in today’s technological climate. Objects like “Hooch Bottle Half Pint,” and “Bulletin Board” make the environment all the more life-like. Cardboard, paper and acrylic come together to add bits of personality into each area of this fabricated hotel – a personality that is, inevitably, tied to those of the artists themselves. The creators have been known to participate in the works they make, even after they are done constructing them, and throughout the course of this exhibition, they will make surprise appearances at the gallery. The discomfort of the atmosphere lies not only in the traditional connotations of an old-fashioned hotel, but also in its construction: Why, then, does it make us so uncomfortable? Like childish fantasies present in many children’s books, drawings coming to life should be playful and imaginative. And though the installation is precisely that, it nevertheless feels like one is standing among corpses of the objects that have been so deeply embedded within everyday American life. The Paper-Thin Hotel is a fantasyland with everything contained therein but reality itself. Dosshaus is commenting on the recycled and relative nature of reality today. Particularly explorative of social media’s power in modern culture, Dosshaus magnifies this fabrication by constructing a world that is literally “fake.” Though the work is fun and playful, it is important to consider what it might expose about individuals’ own fabricated realities. From the gallery’s website: “Our walls are thinner than ever. Additionally, with the myriad cardboard variations on artifacts that once served as the foundation of American culture, one can’t help but wonder if the real things are anything more than a paper-thin illusion.” Perhaps we are all vagabonds in some sense, existing within our own paper-thin hotels, roaming here and there, searching for a home within the next person’s illusive configuration.