Alison Saar/David Hockney
From Topsy To The Digital Age 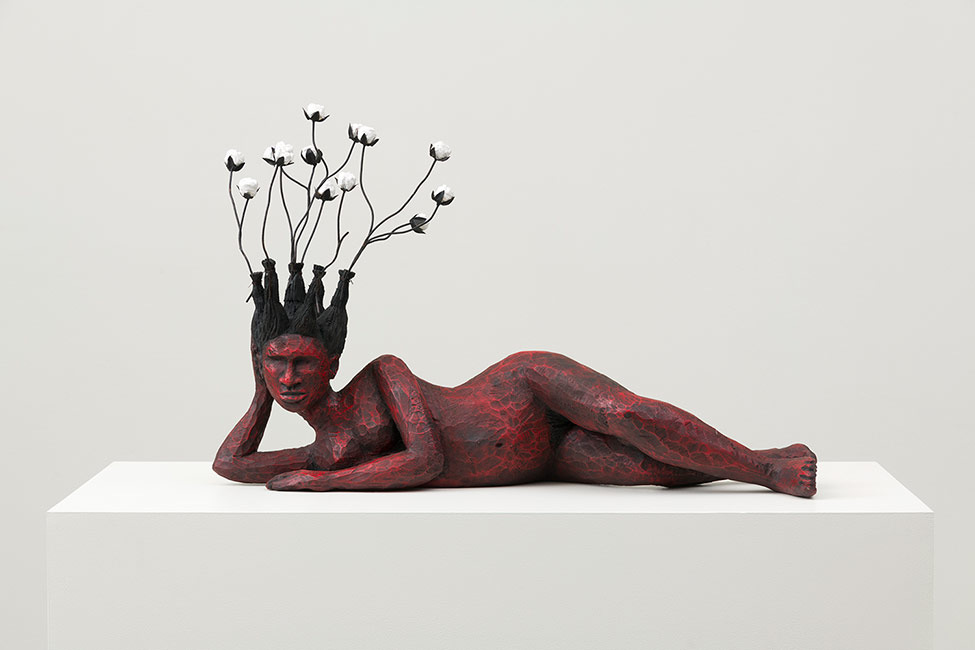 The concurrent exhibitions, Alison Saar, Topsy Turvy and David Hockney, iPhone and iPad Drawings, 2009-12, feature new works by these iconic artists. Los Angeles-based Saar presents mixed media works that take their point of departure from Topsy, a character in Uncle Tom’s Cabin. In Harriet Beecher Stowe‘s novel, Topsy was “eight or nine years old, and, besides being very black, had round shining eyes, glittering as glass beads, wooly hair braided into little tails, which stuck out in every direction. She was dressed in a filthy, ragged garment.” Rather than portray Topsy as depicted in the story, Saar reimagines the character’s plight. A suite of five life-sized sculptures made from wood, copper, ceiling tin, bronze, tar and vintage found tools confront the viewer. In these pieces, “Topsy” holds different tools —a tobacco knife, machete, hoe, bale hook, sickle— used by slaves to farm rice, cotton, indigo, sugar cane and tobacco. As her cotton-ball topped hair branches out in all directions, her muted features are both poised and defiant. Are these sculpture warriors, guards or effigies? The Wrath of Topsy, is a wire-haired bust —a disembodied woman— who is in charge of her destiny. In White Guise, Saar clothes the stoic standing figure in a white sleeveless dress. In each of her sculptures, Saar imbues the child-slave with power. She is no longer a docile, humble or mischievous youth but a full-fledged woman. Many of Saar’s painted works are studies for the sculptures. In these mixed media wall hangings, her depictions of the figures are softer, but not necessarily less charged. Because they are only seen head- on, Saar presents them more empathetically. The artist’s poignant work draws from both personal and historical sources. Saar continues to wow and challenge viewers with her ability to transform injustice into thoughtful works of art. David Hockney‘s iPhone and iPad drawings line the second floor gallery. As an artist who has embraced technology, Hockney has used iPhones as a vehicle for drawing, since acquiring his first one in 2008. Using an app called Brushes, Hockney has perfected a technique that lets him layer lines and fills of different opacities using both his fingers and a stylus on the screen. These flowing gestural works describe familiar people and places and feel like they were created quickly, like notes or images that record memories. “I draw flowers every day on my iPhone and send them to my friends, so they get fresh flowers every morning,” said Hockney. “And my flowers last.” Hockney has had a continuing fascination with digital technologies and has embraced the challenges of making artworks with devices like the iPad or iPhone with gusto. Although there has been a learning curve, he has mastered this unique method of working, with his subjects intimate and personal. They range from portraits and self-portraits to domestic objects and spaces— a cigarette-filled ashtray, oranges in a bowl, red candles on a red tablecloth, an iPhone plugged into a wall. What is unique about mark-making on the screen is the layering of the individual strokes and the ability to go forward and backward in time. Unlike wet mediums, technological brush strokes are not permanent and Hockney has embraced the back and forth, the changing of color, texture and use of transparency to create works that are highly detailed and complex constructions, despite an initially perceived simplicity. While Hockney created these works on mobile devices, they are presented as digital enlargements, printed on 37 x 25.5″ paper in editions of 25. Gone is the glow of the backlit screen in favor of a still bright, but flattened presentation. The now-printed strokes have lost some of their shimmer and translucency, yet the process of their making remains apparent. The build-up of lines is clunky and somewhat child-like, however Hockney’s vision is consistent and be it an image on an iPhone or iPad, or as a backdrop for an opera, he captures and presents intimate moments in time that have universal appeal. Cover image, Bitter Crop, 2018, Alison Saar
Photographs courtesy LA Louver
Jody Zellen is a Santa Monica-based artist and writer. She has been writing art reviews for more than 25 years and currently contributes to Artillery, ArtScene, Afterimage and Art and Cake. For more information on her art and writings please visit www.jodyzellen.com