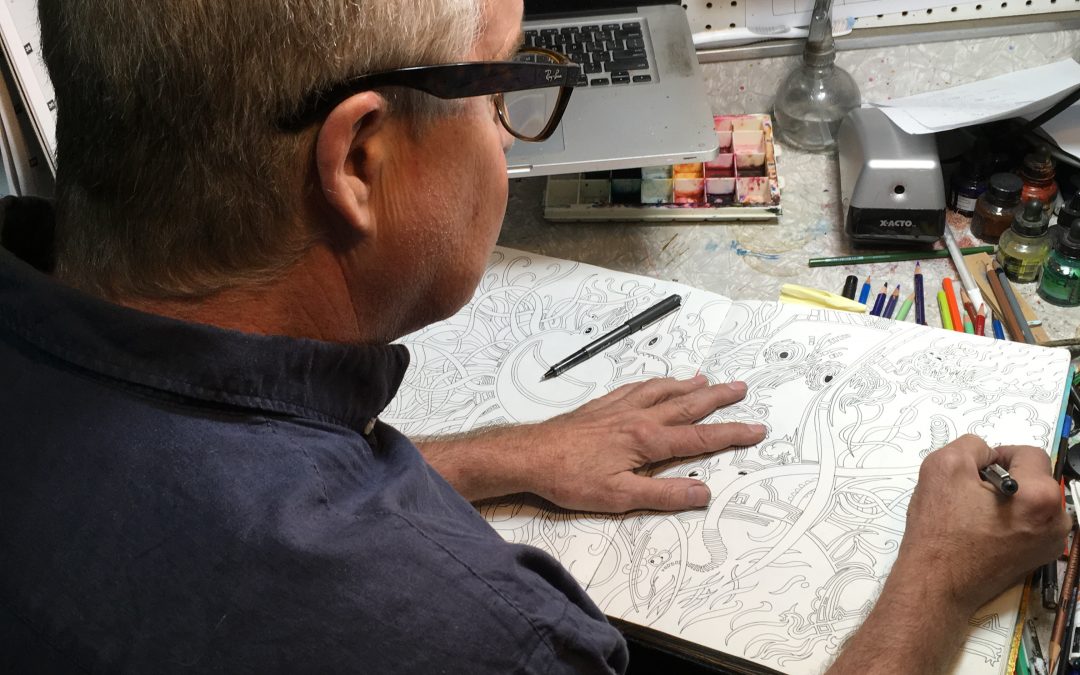 The award-winning illustrator, painter, cartoonist, book designer and all-around guerilla artist who makes small watercolors and affixes them to the outsides of sacrosanct buildings such as the Getty Center and Neiman Marcus for people to take, plumbs his own psychological depths only to discover what makes him love work and life.

What historical art figure would you like to have lunch with and why? Probably Saul Steinberg. He was an illustrator, but he also jumped the train into the fine art world. His paintings and little doodles and those weird covers for the New Yorker were odd at the time. Saul was funny, smart and witty and all this I’m making up because I’ve never seen him talk. A Hole In One

What did you purchase with the proceeds from your first sale? Probably pot. Like I said, it was a million years ago and way before my time – my time being the time when I was conscious of my existence, because from 0 to 25 or 30 you’re not aware of your being.

What words or phrases do you overuse? ‘Nice.’ I say that a lot, especially online, or ‘lovely.’ I say lovely way too much. It’s a gratuitous appreciation of what someone is doing, because when things are posted – and this is going to sound shticky and it is shticky – but quite honestly, I have never liked on FaceBook or Instagram. I will always write a word – as a thing. I find ‘likes’ kind of offensive. They’re just people throwing shit out.

How do you know when a work is finished? When there’s a beautiful thing called a deadline. Ultimately, I don’t think I’ve ever finished anything. I could always make one more mark. You could always rewrite something, forever. Thank god, you have somebody wanting it.

When and where were you happiest? Right now, talking to you. What is your most treasured possession? My truck. It’s a Toyota Tacoma, but it’s got a 4-seater thing in it, it’s got wing doors and I can put shit in the back and it’s protected. It’s been broken into, but it’s a little bit beat up now so no one’s really interested.

What is your ideal escape destination? Garages. My garage and my mother’s. Ultimately, in order for anyone to get anything done – that’s one of the sad things about our occupation – you have to be alone in order to do it, at least I do, and in order to get a lot of things done that means you’re alone a lot – in my case in my garage. What’s the worst survival job you’ve ever had? When I did art design at a newspaper – pasting up pages – back in the day when people still did that.

If you could change one thing about yourself, what would it be? My weight.

What TV series from your youth best describes your approach to life? The Little Rascals. I’m serious! I gave a speech recently and talked about how inspiring it was. I take after them, because they’d take like a donkey and a spare tire and piece of wood and an old carpet and they’d put on a show and they’d save the farm. And that’s basically what we’re doing as artists.

What is your most treasured memory? My marriage. Shh – my wife is listening in the next room.

What makes you smile? When things are funny.

What makes you cry? I don’t know about you, personally, but have you been crying more lately? For me it’s puppy videos and our President – the world in general. What’s going on. I can look at somebody give a speech and say, ‘You’re so right. This is so sad.’ I didn’t think about it enough before to have it make me cry then. But now…

What is your go-to drink when you toast to a sale? Kamboucha tea. After an all-nighter, what’s your breakfast of champions? Cheese and crackers. Seriously. And fruit.

Who inspires you? It changes from week to week. It does for everybody and today it’s David Hockney. I listen to him talk and he said, ‘People mention my hedonistic lifestyle and all that stuff – especially in the 70’s. I’m all for the hedonist life style and I paint for a lot of people, but all I did was make work.’ He’s one of the most prolific painters and makers of shit that I’ve ever encountered, which I admire greatly. What do you consider your greatest achievement? Oh, wow, who wants to have just one. It changes every day.

What do you dislike most about your appearance? Decaying. The decay factor that I have no control over, unless I spend a lot of money doing something about, it but I don’t really have that desire because it’s not that big a deal.

If you were to die and come back as a person or a thing, what would it be? I think I’d be the same thing. I might be a female, though. I was raised by a pack of wild females and I think that has inspired me and also the atmosphere of the universe right now. That sounds very deep, but the world is very women-centric in general – and I’m all for it. I’m doing a new book or talking to myself about doing a new book and it’s about women in power and stuff like that.

The artist can be reached at http://jt-steiny.com