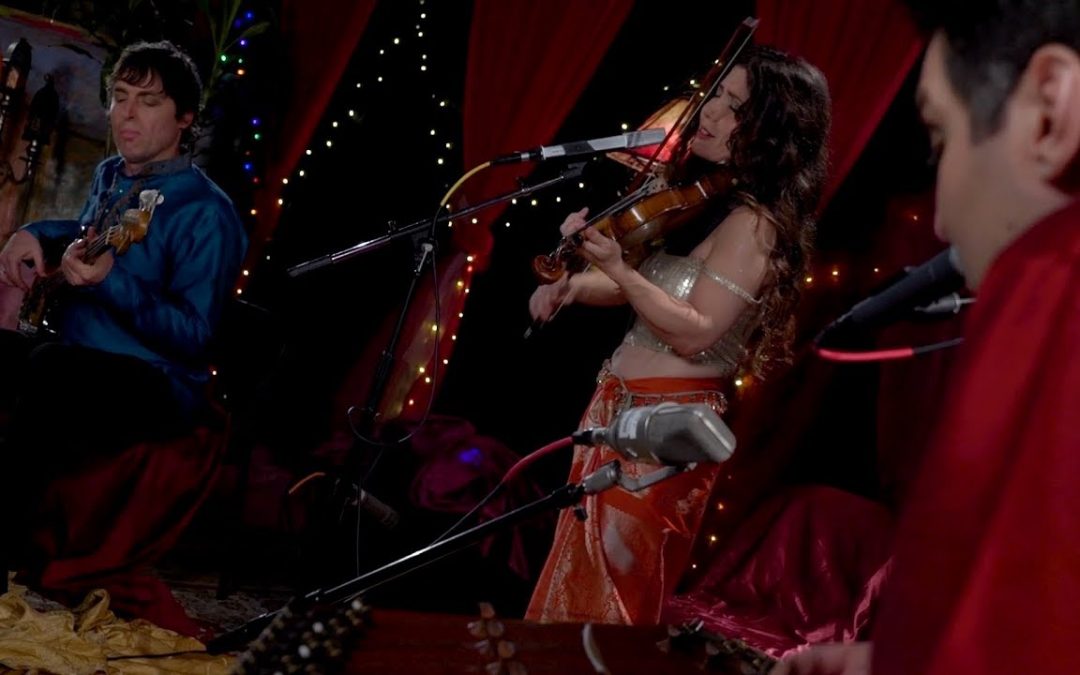 Opium Moon has been described as Kama Sutra music – a sensual and groovy collaboration of master musicians – Lili Haydn (violin/voice), Hamid Saeidi (Santoor – Persian hammered dulcimer/voice), MB Gordy (ancient percussion) and Itai Disraeli (fretless bass). The quartet hails from disparate corners of the world – Israel, Iran and the States – and creates peace through their alluring harmonies. Their name was inspired by a poem from the great Sufi poet Hafiz, in which birds “are smoking the opium of pure freedom…”

Haydn has released five critically acclaimed recordings as a solo artist, which have been a favorite on NPR, the station lauding her as “A mix of neo-psychedelic flower child and rock star virtuoso…Heifetz meet Hendrix. The violinist is also known for her legendary collaborations with, among others, Roger Waters, Herbie Hancock, Sting, Jimmy Page and Robert Plant. In addition, Haydn has  performed with the Los Angeles Philharmonic, Josh Groban, Nusrat Fateh Ali Khan and George Clinton‘s  P-Funk All Stars. A humanitarian and activist, Haydn also gigs regularly for human rights organizations, including Amnesty International and Human Rights Watch, with the belief that music has the power to uplift and heal.

Hamid Saeidi has composed musical scores for more than 30 films, television programs, and dance and theatrical presentations, receiving awards at the Beirut Film Festival, the Iran TV Festival and the Society of Critics of Theater in Iran.

MB Gordy’s groove is ubiquitous, as the percussionist has played on more than 300 top box office films, including Frozen, the X-Men series, and the Harry Potter series, to name a few. He’s performed with artists as diverse as the LA Phil and The National Symphony to Beck, Michael Buble,The Doobie Brothers, Guns and Roses, Green Day and many more. Itai Disraeli is an award-winning bass player, composer, and co-founder of the band MAETAR.  His innovative style is informed by his Middle Eastern heritage and forays into jazz, Indian, rock, and funk. He’s played with Jackson Browne, Larry Coryell, James Gadson, and Nishat Khan, among others. His music has been licensed for TV and film, and he has contributed to humanitarian and peace organizations, believing, as do the other members of the stellar Opium Moon, that music has the power to heal and connect.

Upcoming dates include a performance on April 21 at the Corazón Performing Arts Center, with artist Norton Wisdom (below), who has worked with numerous musical ensembles and spontaneously paints images that capture the essence of the moment, accompanying these virtuoso musicians.