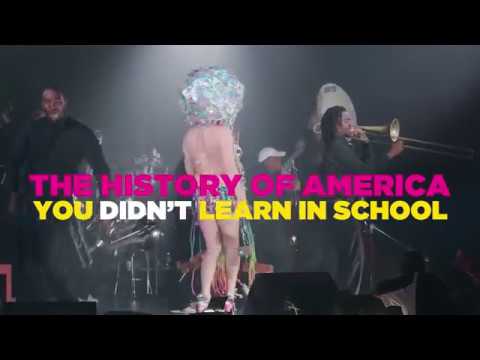 Run, walk or do anything you can to see Taylor Mac at The Theatre at Ace Hotel in this mind-blowingly original, drag-queeny and politically queer love fest, A 24-Decade History of Popular Music. And please note: All genders welcome! Mac’s multi-year effort to chart a subjective history of the United States through 246 songs that were popular throughout the country, and in its disparate communities, from 1776 to the present day, is a fantastic trip that’s well worth taking. Costume designer Machine Dazzle, a longtime Mac collaborator, has handmade an outrageously imaginative, world-unto-itself costume specific to each decade.

This 24-hour extravaganza – each chapter runs six hours in length (time flies when you’re having a blast) – features Mac and an orchestra — led by music director Matt Ray, who created new arrangements of all 246 songs. There’s also an ensemble of “Dandy Minions” and a variety of special guests, including Grammy-nominated stand-up comedian Margaret Cho (Chapter IV) and singer-songwriter Amber Coffman. Los Angeles-based artists include the Centennial High School Marching Band and theatrical circus company Troupe Vertigo, plus local musicians and, yes, a bevy of burlesque dancers. Members of the audience are cast as colonial needle workers, World War I soldiers and Yum Yum from The Mikado to help make the 24-hour journey a true community experience.

Mac, a 2017 MacArthur Fellow who was born in 1973, explains: “A 24-Decade History of Popular Music is a reenactment of how the individual(s) may lose the long game but communities and movements, if continually brought together, have the potential to thrive and bend toward justice, adding, “I’m not a teacher. My job is to be a reminder. I’m reminding the audience of the things they’ve forgotten, dismissed or buried — or that others have buried for them.”

The work, co-produced by UCLA Center for the Art of Performance, and The Theatre at Ace Hotel in association with Pomegranate Arts and Into, has won a long list of awards, including the 2017 Edward M. Kennedy Award for Drama and was also a 2017 Pulitzer Prize Finalist for Drama.