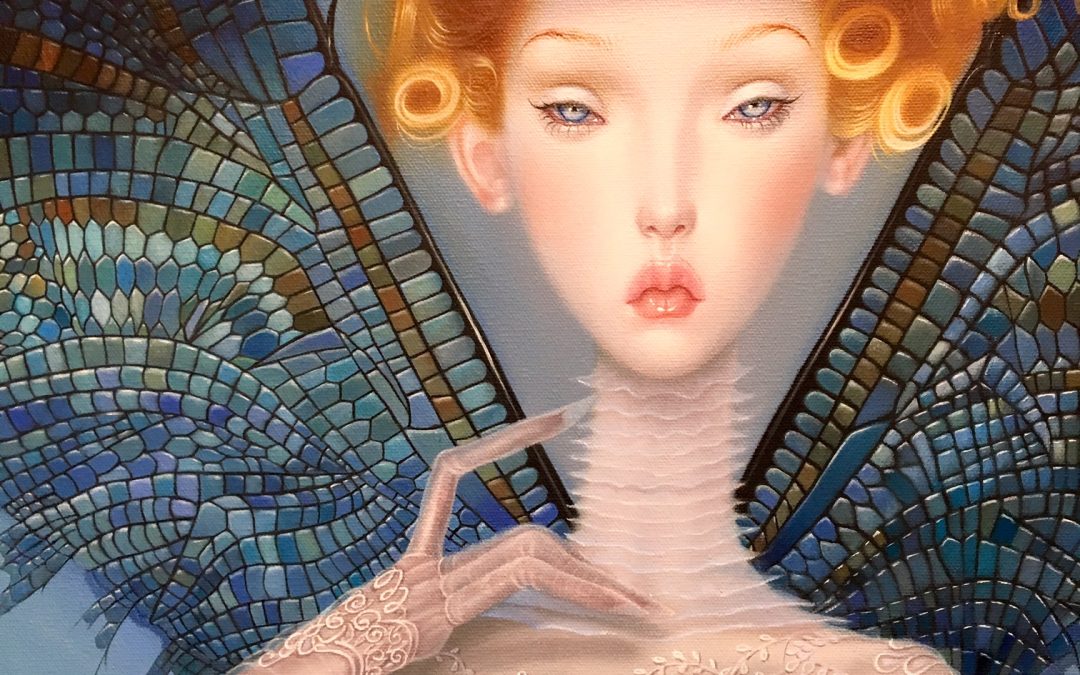 
Contemporary surrealist painter Troy Brooks has been known to create characters described on different occasions as “regal,” gender-questionable,” and “eerie.” On his website he proudly states: “I am Franz Kafka as a drag queen, spilled onto a canvas.” Indeed, his work, like Kafka’s, flirts with elements both real and fantastic. This show features surrealistic oil on canvas paintings that are oddly empowering. The women in his portraits are doll-like, which is particularly noticeable in Cloverhead. They call to mind the work of the Popovy sisters – a Russian doll-making duo, whom Brooks has stated as an inspiration for these new paintings. Animals, women, and the fantastical have always been the focus of Brooks’ explorations, now perhaps more than ever. He has been known to render women on the verge of “experiencing something,” as if viewers have caught them just in time to be successfully voyeuristic. Having started sketching the works of great Hollywood photographers, it’s no surprise that Brooks marks his works with the shock and glam of cinema. Though these new paintings are slightly less old-Hollywood noir, and more pop-art colorful, they are clearly  compelling narratives. Some characters in the Skinwalker series are wide-eyed and innocent, as is the case with Water Lily. Others are flamboyantly sensuous, like Caligula, which features straddled legs, latex gloves and Lolita-esque accessories. There are also the characters that overwhelmingly exude a strong physicality, with Insectus doing so by depicting the character as she stands ever so tall, flexing her biceps. The powerful, serious, seemingly in-drag character in Cocainium has the legs of a spider, whereas Metamorphal sees the character with embellished wings, as if part butterfly. Venus shows a character –  part man, part woman, part creature – whose head is sprouting wings and whose feet are those  of a bird perched upon an egg against a cloudy background. Brooks’ works transcend time, gender, and even the human form. His protagonists come into contact with and transform into elements of the natural world while embodying extra-terrestrial mannequin forms. These suggest an other-worldliness and a power of that world: These vixens are robotic and in command of their surroundings. This is furthered by the fact that they, at times, blend into their surroundings, their smooth flesh faintly dissolving into the background. The characters in Brooks’ paintings look equipped to take over the world, whether it be through their beyond-human physical attributes, their striking palettes, or their conspicuously self-assured facial expressions that, whether directly or indirectly, unabashedly confront the viewer.