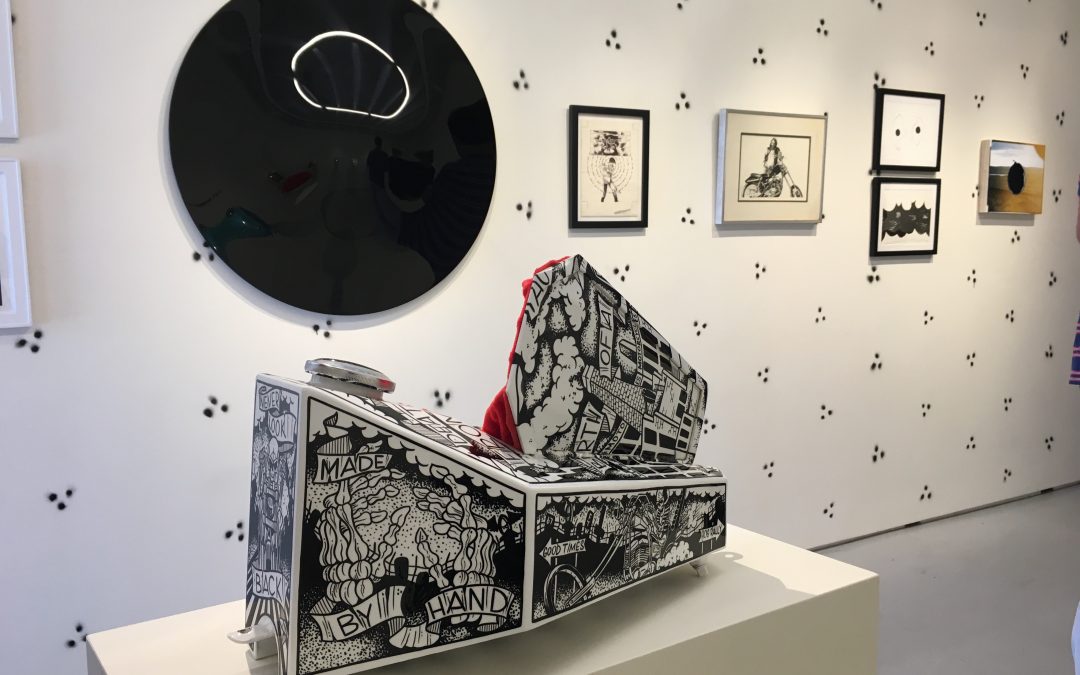 The Arts and Crafts Far Out Paint Show


The press release for this super show, The Arts and Crafts Far Out Paint Show, at C. Nichols Project on Venice Blvd. in Mar Vista, traces the history of “pinstriping and custom paint” back to the era of horse-drawn carriages – which is true – but perhaps it should be recognized from the time even before chariots: Paintings on cave walls often have a strikingly similar sophisticated fluidity of line and strong motivation of expression while showing the hand of the artist – as do Mycenean and Greek pottery, Roman frescoes from Pompeii, Chinese calligraphy, and art from all over the world. So it was way cool to study this exhibition, brought here directly from the Brooklyn Invitational Custom Motorcycle Show from late last year. Said Nichols: “The West Coast version adds artworks and photographs from those considered to be part of Arts and Crafts Racing, an informal umbrella of artists and industry creatives who are also crazy for car and bike culture, especially racing and its aesthetics.” Indeed, and crazy enough to embed hits of acid, partially used rolling papers, toy fish, fake coral, a surfboard fin and even a tattooed pig hoof into their painted, sculptural bike tanks. The finish fetish movement has/had nothing on these lovingly created babies. Vincent Szarek, artist and crew-chief of Arts and Crafts Racing, who invited the artists of all stripes to participate, says, “Bike paint is far out these days… but it has been and will always be far out…and that is pretty far out!” He said he wanted more than one day at a cool car show to present these works, which have been made all over the States, so he contacted his old friend Christine and, naturally, she was immediately “stoked” to show the work. The works, by artists also including Dennis Babin, Gen Love Ear Art, The Harpoon and Darren McKeag, are arranged in the center and along one side of the space, appropriately mounted to the wall on what could be seen as remnants of bike frames, in a position one might encounter when swinging a leg over a bike and cranking the engine. Across the gallery are other art works such as illustrations, photographs and a black, 3-holed and just framed ready-made by Peter Schroff that probably was used the day of the opening. Having lived in the neighborhood for a long time, I’ve had the benefit of attending and writing about Christine’s shows quite a bit. Her openings, art and artists are always comfortable, inviting and especially unique. Go see this show before it closes on March 10. All photographs by the author.