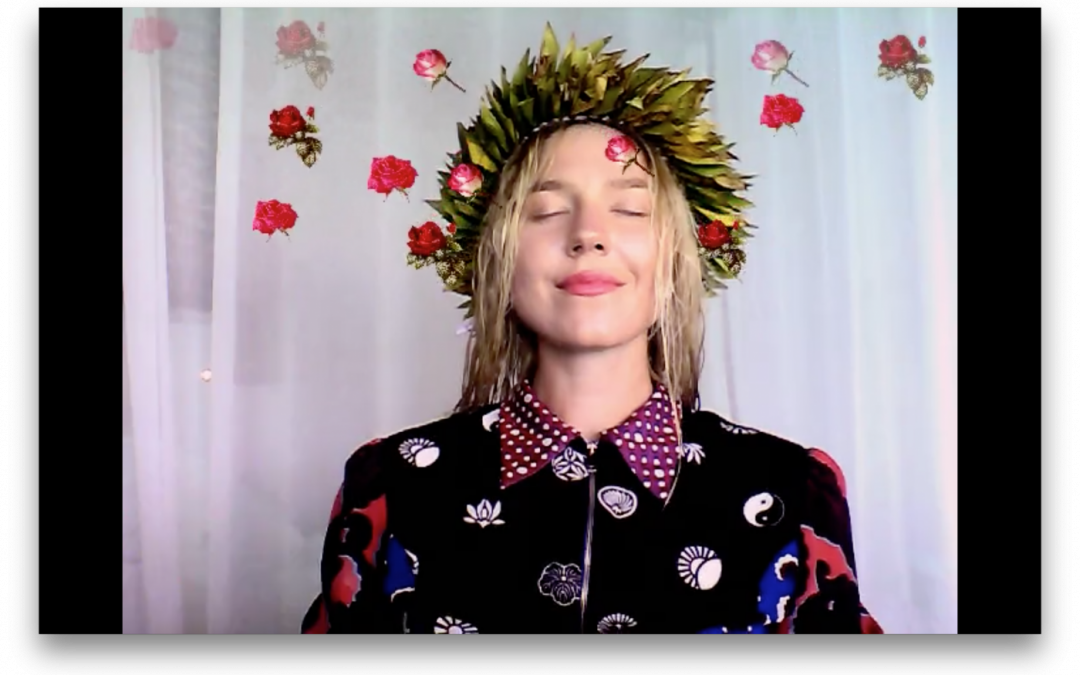 
Petra Cortright is often described as a post-Internet artist. What this means, however, is that she is not against, or after the Internet, but indebted and dependent on the web for both source material and distribution. To that end she appropriates imagery — often downloadable as screens savers compositing cheezy, cheeky and suggestive animations — pole dancers, frolicking animals, sunsets and ocean scenes— to put into her own creations. Since 2007, Cortright has also been creating short videos with her computer’s webcam, performing for herself and then world-wide audiences. After uploading these videos to YouTube and attracting a following, the entrepreneurial Cortright devised an algorithm based on views to determine the price of the gallery edition of her works. (The videos also remain viewable at no cost on her YouTube channel.) At UTA Artist Space, Cortright has elegantly installed 50 videos, created between 2007 and 2017, presenting them as a freeze on small flat screens, evenly spaced along the  gallery walls. The floor is covered in grey carpet, and comfortable bean-bag chairs are also provided, encouraging viewers to lounge while watching the myriad videos. No two videos are the same, although most depict the artist front and center— seated at a desk or standing a short distance from the camera against a banal background. The scenery changes as Cortright moves her computer from location to location— almost exclusively interiors, and often intimate spaces like hotel rooms, her studio or bedroom. The only exterior locations are composited travel landscapes culled from, well, the Internet. The perspective is always the view from the webcam. Originally, these works contrasted what Cortright saw on YouTube: young girls provocatively performing in front of the camera as the artist presented herself staring below the camera’s vantage point, as if at work on the computer. What set these videos apart was the presence of found graphics that danced across the screen. In later videos, Cortright would don a costume or mask, and act in front of the camera. She explored what it was like to be a glam girl posing and dressing up for unknown audiences, cavorting and twirling for the camera. Seemingly naive, though completely computer savvy, Cortright, early on, was aware of the power of the Internet, her own good looks and a global audience, and took advantage of that form and content.

Cortright also mined the web for stock digital effects and screensaver imagery that she could incorporate into her performances. In the video rgb,d-lay, 2011, she appears in triplicate as an array of color offset — and in DRK PARA, 2013, the screen is divided into nine vertical stripes distorting the image of the woman singing. Some of her later videos like DREAMY and SNOWY (both 2015), were shot for designer Stella McCartney and depict Cortright moving and shaking in fur outerwear in front or her own printed artworks. Seen individually, these works can be interpreted as experiments in self-expression. Yet collectively, when it is clear that Cortright is director, performer, editor and special effects master, the works become fragments that form a compelling and often unsettling narrative about the power of the Internet, art, commerce and technology.