Mondongo: ‘What are we gonna say after HELLO?’
Unrelenting, Shamanic & Anti-Bourgeois 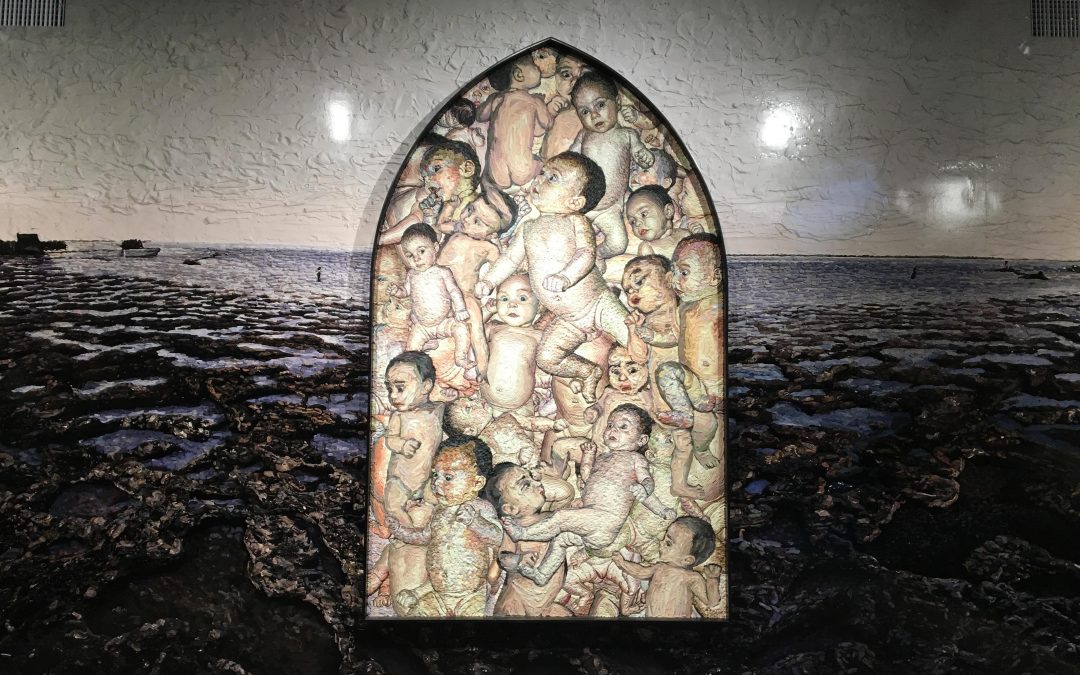 What are we gonna say after HELLO?


The latest work from Argentine art collective Mondongo (Juliana Laffitte and Manuel Mendanha), is overwhelming, igniting contradictory feelings through an array of mediums. The exhibition juxtaposes life and death, fire and water, ancient and modern, tangible and fleeting.

Founded in the late 90s, Mondongo was originally formed by three artists and has, since then, created controversial and atypical art, including works made with actual animal flesh. In a feature by the New York Times, one of Mondongo’s members was quoted as saying, “There has always been an element of denunciation in what we do…Something irreverent and anti-bourgeois.” Though jagged, violent and seemingly disjointed, these works, overlapped and set side by side, comfort and test one another. Entering the gallery, one is greeted by the face of a man, constructed from Mondongo’s signature gritty, clay-like materials. This face is one of many portraits the artists have fashioned, and is symbolic of the collective’s overarching mission: to make one more conscious of his own role within the greater human experience and to appeal to audiences of any and every background. Walking through eerie black curtains, the viewer is then faced with images of water, trees, babies and skulls. These seemingly disparate forms come together to tell a cohesive story of confrontation and conquering. Massive images are also mounted on the walls: that of a forest, as seen behind the Fire series (2018), and that of a marshy marine environment, as seen behind the Gothic Arch Series [Babies] (2008). The oceanic mural lies in between the two forested murals, interrupting any degree of anticipated continuity. The large scenes of nature further obstruct one’s view and challenge notions of traditional sublimity. Small paintings of fires are plastered upon images of the trees, whereas a Gothic arch encasing plasticine babies hangs over the marine setting. This arch was created a decade earlier than the surrounding fire series, yet still harnesses the same primal, writhing energy that the new works possess. The opposite wall is embellished with crafty red crosses and grey, tear-shaped cut outs. Large felt-like sections overlap a whirlwind scene made of the same plasticine on wood materials used in the Gothic Arch Babies piece. Hanging above the table, which displays metallic masks and padlocks, this piece grants the space the feeling of a shrine. The duo that is currently Mondongo wear the masks (which appear to have sprung from a horror movie) during periodic performances that occur throughout the run of the exhibition – performances described by the gallery as “cyclical and evolving.” Cecilia Pavon, an Argentine poet, writes that “One element that runs through all of Mondongo’s work is the almost sacred value of conversation.” For her, Mondongo’s studio was a “shamanic center…making people connect with their pain.” Mondongo’s works are simultaneously explorations of nature and human nature, foregoing scientific connotations of the natural world and replacing them with the emotionally unrelenting. What are we gonna say after HELLO? acknowledges the tensions that exist within the larger narrative of human existence. By offering physical representations of states of being and integrating them into one another, the exhibit is equally as meditative as it is visceral.

Photos by the author.