Popping Up With Bill Barminski
Please Touch The Art 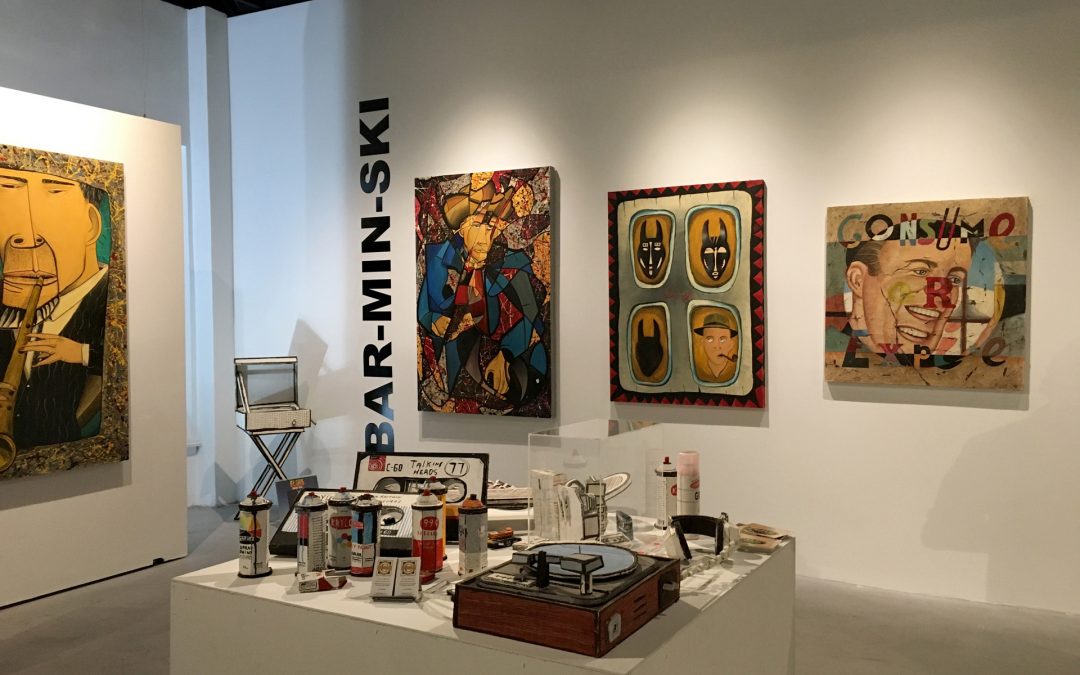 
Arriving on a cold Thursday night to the VIP Opening of the Bill Barminski Retrospective – a two-day pop-up show at the relatively new Castelli Art Space – I was greeted by videos being projection-mapped onto a stack of boxes, as well as grilled tacos and drinks, all happening outdoors. Inside, a table of assorted cardboard sculptures were waiting for people to handle them – yes, to touch them. A collector friend cringed when the wind tipped a few over, and I shrugged, telling him not to worry, as Bill, smiling, casually walked over and straightened the sculptures, handing a “spray can” to one of the guests to show it was all okay. Bill Barminksi’s approach to his work is similarly relaxed in terms of elements of construction, but not without concentrated focus on social issues that our consumer-based culture revolves around – guns/violence, personality “cults”, and the culture of, well, culture itself. One example, the work Breakfast With Jackson Pollock, shows a close-up of an extended hand holding a bowl of fruity cereal. Rendered in a matter-of-fact, almost sign painterly way, accented by purposefully aged gashes and cracks in the paint, which are then varnished together with the message, the work has no visual relationship to Pollock’s art, which is partly the point. When asked to talk about the painting, not much was said, which is typical Bill. Something on the order of, “It’s just about what goes on in the art world – we’re fed so much….history.” (Feel free to substitute the noun “history” for other, less tasty ones…)

In other parts of the gallery, the dialogue continued with mock ads for vodka (Absolut Barminski), and a life-size deer (in the headlights) replete with antlers – as well as caricatures of jazz musicians such as John Coltrane, re-dos of Coca-Cola ads, and a painting of a grenade with a price tag on it. Bill Barminski next to his deer, being watched….

Carlos Iglesias, who runs the gallery with owner Fred Goldstein, says, “The best part about it was that despite the wind and the cold, so many people came out to support Bill. It shows just how much respect he has in the art community. We’ll be doing another show of his work in the future.” The Bill Barminski Retrospective was a rousing – albeit too short – pop-up that received earned acclaim, not by demand or command, but by astute action.

All photographs by the author.