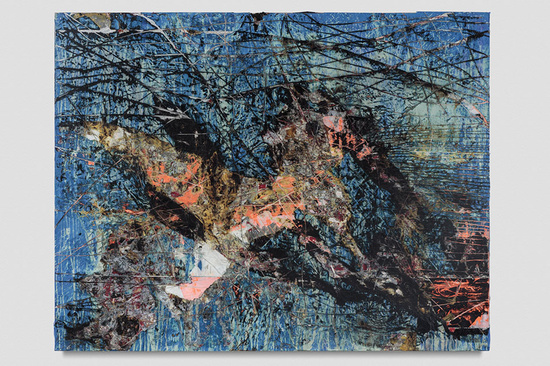 
Mark Bradford commands attention. He is tall. He is black (African-American). He is gay. Bradford grew up in Los Angeles and Santa Monica and worked in his mother’s hair salon. He often felt like an outsider. He escaped by reading— at first comic books and later art history and theory. He attended CalArts (BFA 1995, MFA 1997) and won the Whitney Museum Bucksbaum Award in 2006 and a MacArthur Fellowship in 2009. In 2013 he, along with Eileen Harris Norton and Allan DiCastro, established Art + Practice in the Leimert Park neighborhood of Los Angeles, a non-profit dedicated to providing services to foster youth and access to free, museum-quality exhibitions. Bradford has an ongoing commitment to giving back to the community. It is not possible to separate his activities into art and life, as for him, they are interconnected.

His paintings and installations, though engaged with the language of abstraction, are infused with personal as well as world history. The political climate, as well as issues of racism, sexism and homophobia, are embedded in his works. Bradford chooses whatever medium best communicates his message and ideas, be it painting, sculpture, video or installation. In his first Los Angeles gallery exhibition since 2002, Bradford intoned that he scaled things back. Rather than create immersive or site-specific installations— as he did for the Venice Biennale in the summer of 2017 (representing the United States), and more recently at the Hirshhorn Museum in Washington, D.C.— Bradford presents ten colorful paintings built over nine months in the studio, on layers of comic book pages that he uses as a point of departure. These paintings are action-packed though not representational in any way. Knowing they are derived from comic books—specifically their structure and colors, rather than the imagery or narrative—the works take on a realm of fantasy. The titles, borrowed from speech bubbles in the comics, resonate in today’s world. “You’re going to regret this when I catch you, you little shit,” “I heard you got arrested today,” “When did I get so old” and “What are you doing here,” could easily come from news headlines, tweets or other social media postings. The paintings described by these loaded titles are dynamic and geometric. Bradford’s paintings appear chaotic, however they begin as structured compositions: In this body of work, the base layers are comprised of thick sections of comic book pages that are sanded and painted over, etched and excised, so the imagery disappears leaving a cacophony of gestures and lines. Bradford’s paintings are made by excavating the surface, covering it up and then removing more material. The paintings are about this process and create their own history.

What was removed or what came before is revealed by close examination where the details of the source materials dot the surface but never cohere. Bradford exults in designing these complex surfaces that at first glance are chaotic mishmashes of shapes and lines, but upon reflection are ordered and carefully etched compositions that dig through layers of materials. I heard you got arrested today, 2018, is a powerful painting where deep black and dark red shapes are intertwined on the surface suggesting movement away from the center, as if escaping from an explosion. Moody Blues for Jack Whitten, 2018, is a more somber work, finished with the knowledge of the death of Whitten, one of Bradford’s mentors. Here, crisscrossing lines created by making incisions into the blue-toned mixed media surface allow the deeper layers of colored collage to emerge.

In Rocket, 2018, what appears to be a pink and yellow bird floats above a gridded collage that from afar references a map of a city, but upon close examination becomes readable fragments from the myriad comic books collaged to the surface. Faces and word bubbles emerge from Bradford’s linear structure. While gritty and chaotic, the paintings also have an internal rhythm and logic. They are exciting, energized and poignant images that fuse the language of abstraction with the dire nature of our contemporary times. Bradford’s message is implicit and linked to his politics and commitment to social change. He is that rare artist who can indulge in the formal qualities of painting to make works that are simultaneously gorgeous and cutting. This sentiment is typified in the work, Birdshit, 2018, an aggressive painting in which a large uneven swath of white almost dead-center covers everything below it, obliterating his careful sanding of the collaged surface below. It is a pure delight to look closely into Bradford’s paintings and think about the comic book imagery that lies below the incised and sanded surfaces. He is a master at creating densely layered works that conjure archaeological excavations filled with hidden treasures.