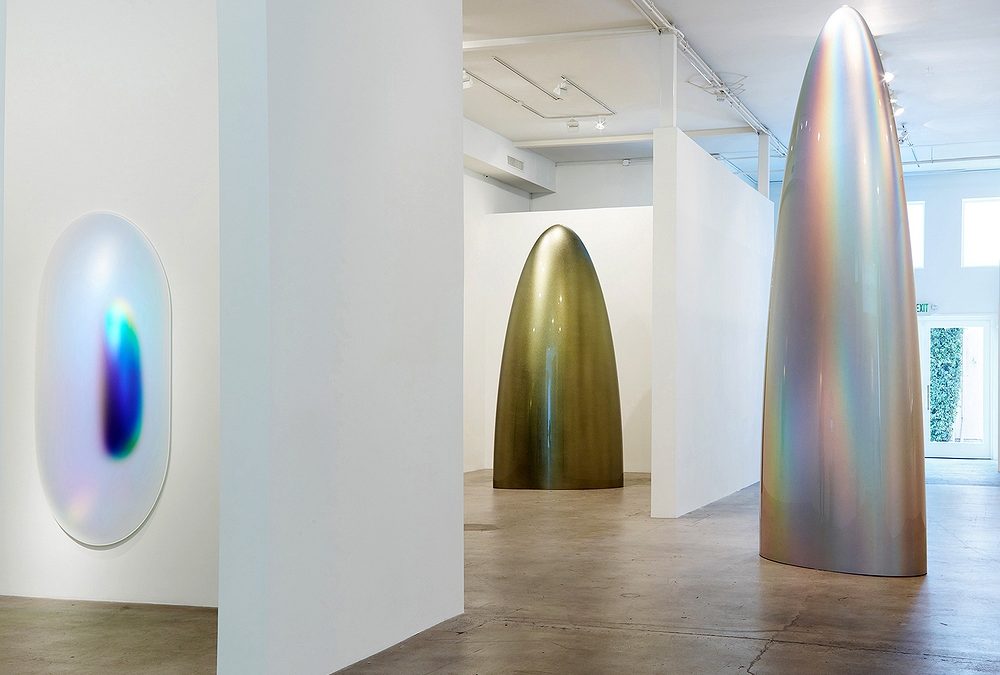 Raised in San Juan, Puerto Rico, LA-based artist Gisela Colon first began her artistic journey with abstract painting. That is, however, entirely different than her new work being exhibited at Diane Rosenstein Gallery. Influenced by artists such as Donald Judd, Colon’s works mainly consist of sculptures, instantly recognizable and constructed of blow-molded acrylic. The show features different variations of these structures, including the smaller acrylic Pods. Ranging from 24-114 inches tall, these pods are almost amorphic, their colors indistinct and infinite, as well. Attached to the wall, these embryonic sculptures resemble orbs of light. Colon is perfectly aware that her work both embraces and challenges Minimalism and the Light and Space Movement, two genres her works have previously embraced. Colon has noted, “… “minimalism has historically involved reductive forms that appear lifeless, strictly material…” but her goal is to create structures that “appear to contain life in an abstract way…” Though these sculptures do possess an unnatural iridescence and foreign deformality, they ebb and flow in color according to the position of the viewer. At once opaque and translucent, the surfaces of these works are dynamic – but so are their interiors. One catches a glimpse of some other form within the structure, reflecting layers of perception that exist universally: There is what lies on the surface, there is what lies within, what is visible, what is not, so on and so forth. Unlike the wall sculptures, such as Skewed Square (Aqua Gold) her larger works, like Untitled (Parabolic Monolith Titanium), are freestanding and completely opaque. Metallic, these two large Parabolic Monoliths (each over 10 feet tall), have no edges – they are, “at their core…visceral, primitive, reminiscent of ancient cultural purpose.” These sculptures are also multicolor, space-like experiences, though slightly more reflective and metallic. A freestanding Light Slab, made from acrylic and stainless steel, is also featured in the exhibition. The stainless steel makes for an extra inviting experience, the viewer being able to quite literally see themselves be absorbed by the work. Many of the sculptures, particularly the larger, free-standing monoliths, are phallic in nature – whereas the smaller orbs are egg-like. These anatomical, molecular, natural undertones add to their vitality. In their structure, sensitivity, and complexity, Colon’s creations are indeed humanesque. Their forms offer one earthly visuals, their composition a sensitivity to light and position. Their complexity is multifaceted; the sculptures seem to be always changing, possessing an inability to stand still. They are nearly translucent, but not quite, as are people and their experiences.