Salomon Huerta Still Lifes
The Art of the Gun 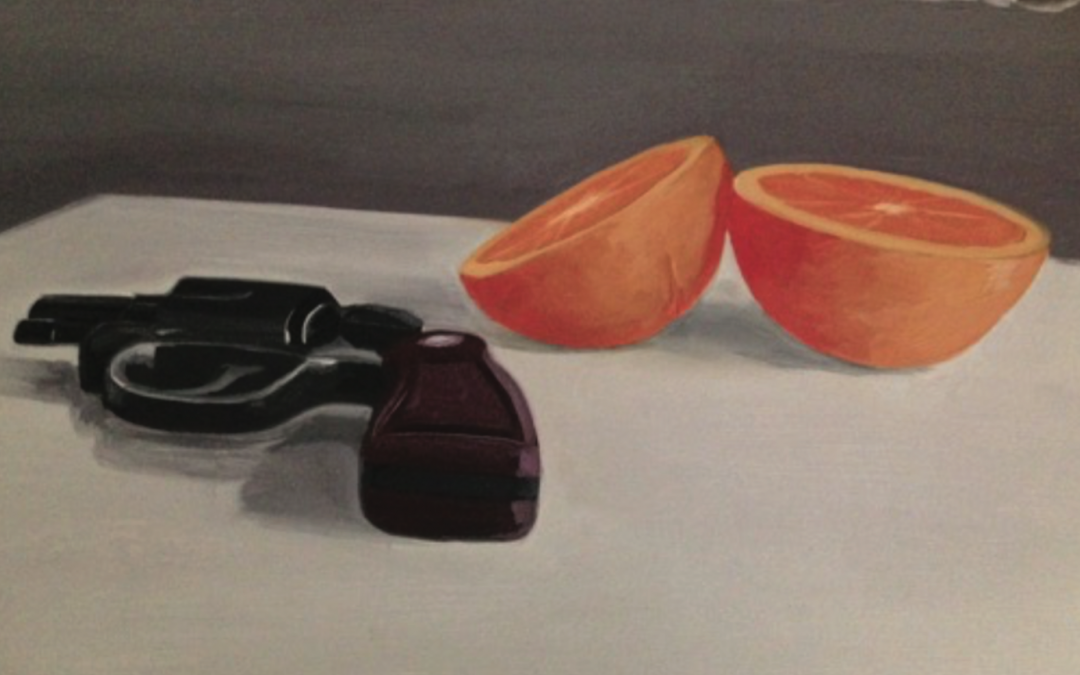 
Salomon Huerta is best known for painting the backs of heads surrounded by monochrome grounds. These portraits hinted at the subject’s race while simultaneously masking their identity. Similarly, his stylized paintings of houses offered little context or information, appearing as idyllically isolated and dream-like dwellings. What lies beneath the surface is what gives Huerta’s work its edge, as he is interested in issues of race, social identity and American violence. His beautifully painted surfaces and detailed representations are a means to an end and a way to communicate deeper messages to a wide audience. In Still Lifes, an exhibition of paintings at the newly-opened exhibition space There-There in Hollywood, Huerta presents a suite of paintings that juxtapose an image of a gun with a myriad of domestic objects. These paintings reflect a time in Huerta’s history, and are drawn from memories of placing food and drink on his father’s nightstand where he kept a loaded .38 caliber revolver. In the statement that accompanies this work Huerta remarks, “When I was 6 years old, I carried a gun for the first time. Before crossing the border from Tijuana to San Diego, my dad would strap his .38-Special revolver inside my pants to avoid inspection. He loved his gun. It protected him and his family. Once we moved to East Los Angeles‘ notorious Ramona Gardens housing project—one of the most violent neighborhoods in the country at the time—my father carried his gun 24/7. ‘Who needs cops,’ he would say? In the evenings, he would place his loaded .38 on the nightstand, where I would place his daily food and drinks. For me, this series of paintings represents more than portraits. They symbolize a simple way of life in the midst of a violent, hyper-reality.” Sustenance and protection are at the core of Huerta’s Still Lifes. Each exquisitely rendered oil painting depicts a portion of a wall and fragment of a side table on which sits a hand gun. The background changes color as nonchalantly as the gun changes orientation and position. Next to the gun Huerta paints what he left for his father — a sliced orange, a stick of butter, bananas, a glass of milk and a pastry, a cup of coffee or a can of beer. These objects stand in opposition to each other. The gun elicits danger yet simultaneously offers protection— as in a father making sure his family is safe. The food is an offering, perhaps from a son wanting to please and placate his father, making sure he has what he needs outside the realm of violence. Presented in a row across two walls in a vast space, these small-scale paintings call attention to the intimacy of family by presenting food and a gun as natural companions.