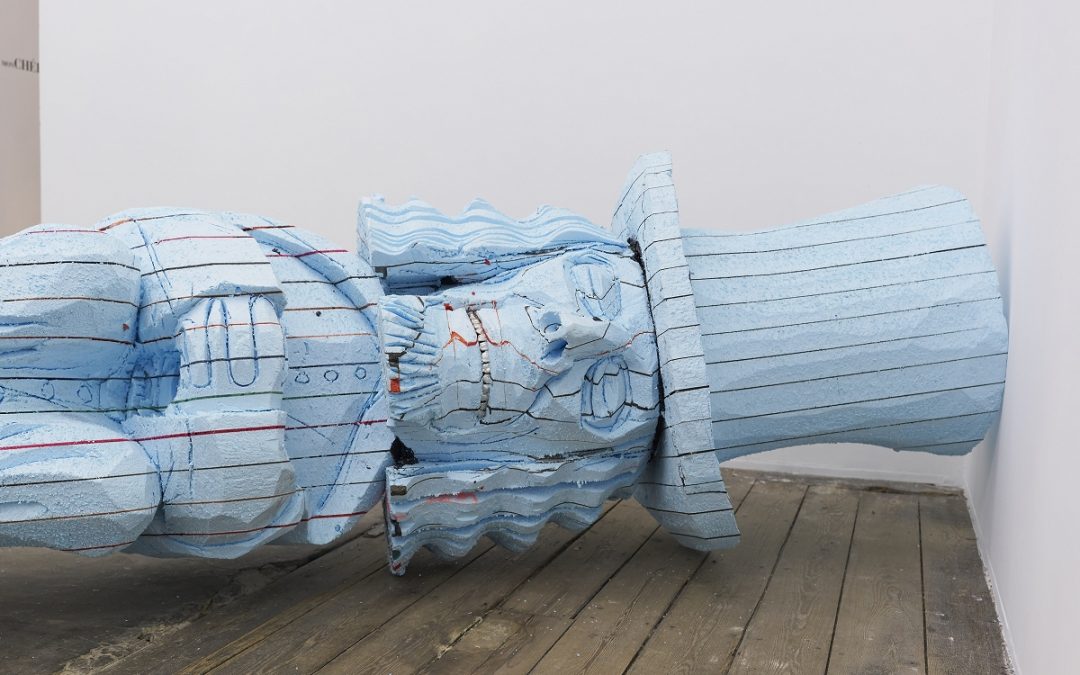 
The winter art fair season always brings something interesting and new to the L.A. art world. And like our own La Brea Tar Pits at LACMA, frankly you’ll just have to dig through the muck for it. Art Los Angeles Contemporary, which was held last weekend at Barker Hangar at the Santa Monica airport, is by no means as extreme an example of this as other larger fairs around the country. Indeed, the approach to the venue was an inviting spectacle of skateboarders casually ripping up the ramps set up near a beverage station under the ALAC banner. The Tropics pop-up juice bar and skate ramp at the front entrance of ALAC 2018. Photo by Michael Underwood Shulamit Nazarian represented Trenton Doyle Hancock‘s humorous, sometimes exasperatedly emotionally-drawn paintings, while the Hole on the Bowery in NYC (which we remembered from our visit la summer) brought the exhibition process to the forefront with a sampling of their artists, including a popular painting by Erik Yahnker and another by Jonathan Chapline. The Hole’s popular booth landed at ALAC from the Bowery in NYC. Photography by the author.

Over at the StART Up Art Fair, the democratization of the process of showing one’s own work met the cutting edge of capital at the Kinney Hotel on Washington Blvd. in Venice. While the process of visiting somewhat packed rooms in the presence of the artists could be a bit intimidating at times, the results were surprisingly strong, including fierce animalistic works by Emily Maddigan (a couple of which were transported from our Art in Place show in Long Beach) that position themselves in the realm of bust portraiture. Their socio-political import also does not discourage the desire to own these works.

A unique series of gorgeous personal photographs of farmers – shot from underwater as they toiled above – were exhibited by Lily Phan, who brought them back from numerous trips to her native Vietnam. Lily Pham with her works. Photograph by the author. Emily Maddigan with her progeny. Photograph by the author.

Another great room was Zopilote, Inc., from Mexico City, where a collective group of artists presented their intriguing and courageous prints that this author wished he had been able to collect. Photographs by the author.

The StART Up Art Fair‘s Selection Committee, stalwarts of the Southern California scene, seemed to accept the difference between typical art/craft fair staples and what some of us look for in our museums, galleries, alternative spaces, and studio visits with equanimity in the process of the selection of artists. That didn’t hurt the fair on the whole. On the contrary, it provided a refreshing look at what the state of creativity is everywhere, as artists ponied up their wares to present a great event that appears yearly around the country.