Judith Linhares: The Way She Goes To Town
And What A Town It Is 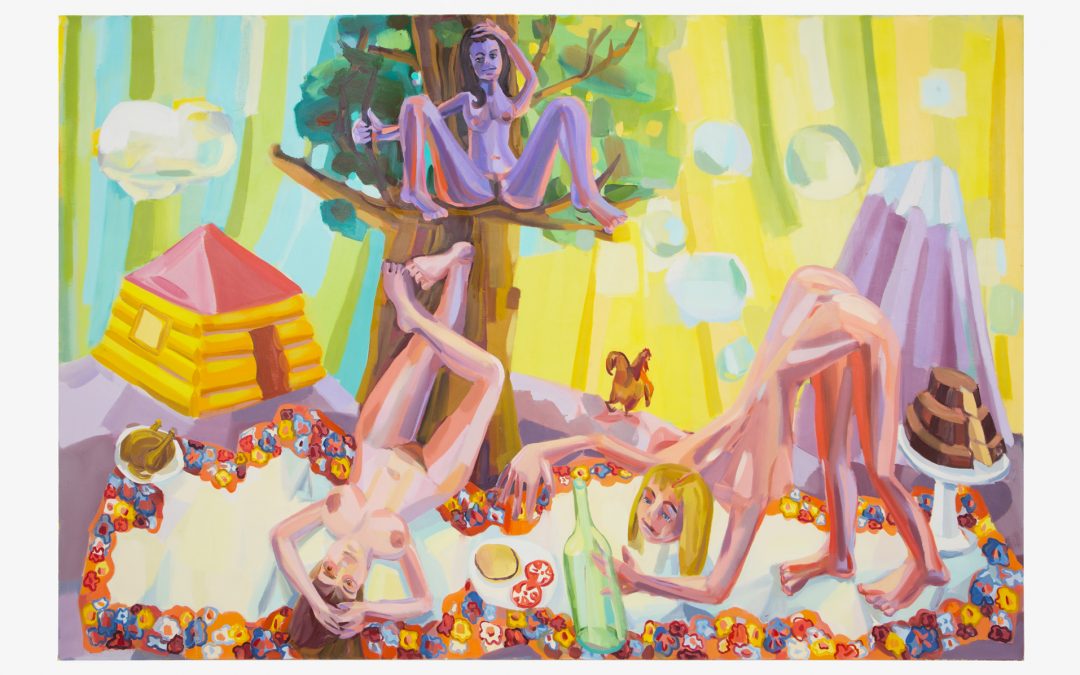 The Way She Goes To Town


In their liberating characters and revolutionary coloristic choices, the works of Judith Linhares ooze the 1960s. The pieces scream feminism, even in the still lives such as Stack (2017) and French Bouquet (2016). Born in Southern California and raised near the beaches and mountains, Linhares harnesses her bohemian and earthy upbringing within each brush stroke she applies to her canvases. Conveniently, she studied art during the turbulence of that era, and this stream of liberation is present within many of her pieces today. Viewers are greeted with two rooms in the gallery. In the main gallery hang paintings, including Pilgrim (1990), with Yeti-type feet stepping on a bed of flowers, and Cove (2010) – two women, pink and purple in hue, lying carelessly upon an island…of sorts. These characters seem to be surrounded by water, with a sunset above them, and the sky filled with planet-like spheres. A discarded sheet or garment is also visible. The women are isolated, but not alone, as the entire universe is with them as they recline, spectacularly relaxed, in their broad brushstrokes and nonsensical pigments. The faces of those in the paintings are calm, unbothered and even a tad unimpressed. This demeanor is also present within Dig (2017). Here the character’s body is pink, the sky above a multitude of colors, with the ground she is about to dig a vivid psychedelic yellow. Again, a large sphere can be made out in the background of the painting, symbolizing the enormous cosmic power that lies behind Linhares’ signature women. With titles such as Picnic Rock and Slope, one gets a sense of how truly intertwined Linhares is with the motifs and messages of her work. She has said, after all, that she comes from a “tribe of women” – and these works, especially when seen together, really do transport one to a nation where these powerful entities exist, freely and united. In the second room are fem-empowering portraits of women, still interacting with nature, alongside a series of small flower pot still lifes, including Marigolds (2016). Works like Resist (2016) again feature the pink woman, complete with her air of serenity, at once embracing the body of and pulling apart the mouth of a leopard. In an interview with Hyperallergic, Linhares has said that while she was focused on sculpture in the early 70s, “the dialogue was that the worst thing you could do was make art like a girl. So I thought, well, that’s a good thing to do — make art like a girl! I made vitrines with decals and rhinestones and lace — super-femme things.” The flower pots reflect this outright rejection of ideals and the artist’s embrace of subjective experience and fluidity. What that brings to mind – and is similar to – are Fauvism and Abstraction, as well as the work of Gauguin and Van Gogh, with Linhares’ work blurring the lines between the real and the imagined. Comforting and empowering, her art is influenced by the dreams she has been recording in journals for many years. The very real things she stands for – freedom, unity, liberation, strength – are themes of her paintings, but she is evidently also conscious of another state, indeed, a more imaginative, utopian one, and keenly uses images of the natural world to make this conscientiousness more conceivable.