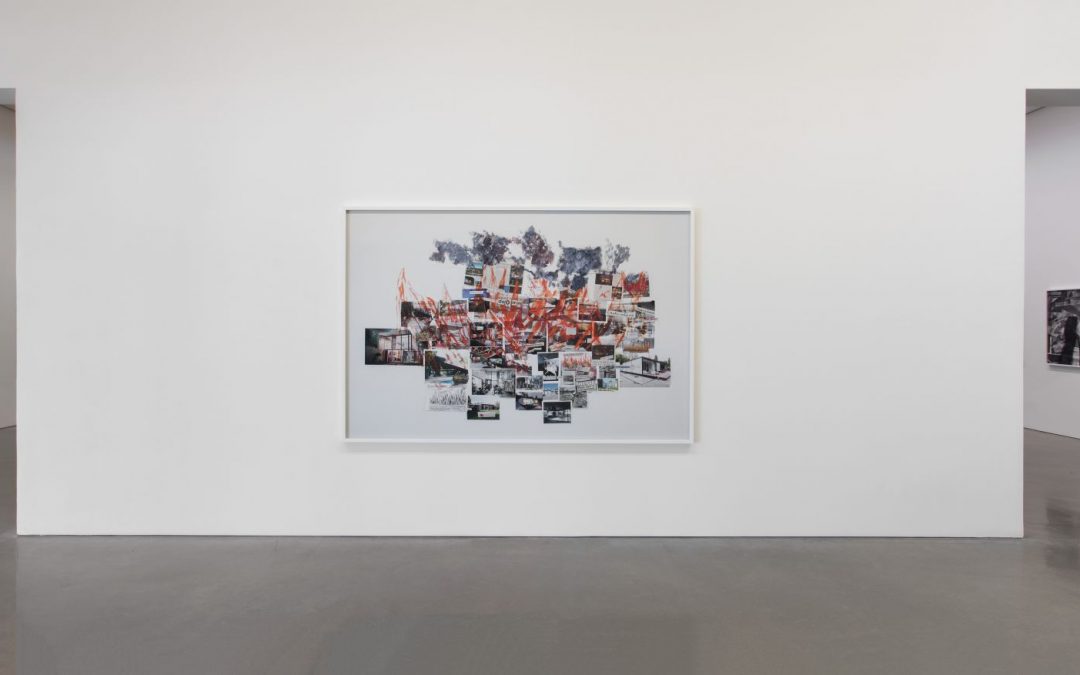 
La Jetée is Chris Marker‘s remarkable 1962 film. It resonates not only because it is made almost entirely of stills, but because each shot is a meticulously composed black-and-white photograph. It is a must-see art school favorite and an entry into the world of experimental film, akin to the first reading of John Berger‘s Ways of Seeing, as an introduction to visual literacy and critical thinking. Catherine Opie‘s The Modernist takes Marker’s film as a point of departure as she models her 22-minute film on his method of filmmaking as well as on his desire to tell a story set in a post-apocalyptic future. Opie’s narrative is specific to Los Angeles as it focuses on L.A.’s rich history of modernist architecture as well as the recent onslaught of political and natural disasters, such as fires and floods that have dominated the news. Upon entering the space, viewers must decide whether to first immerse themselves in cinema— within a custom theater modeled on a modernist dwelling designed by Michael Maltzan, or to peruse the 33 still images that are presented as a loose frieze on the walls of the gallery. The stills are culled from the film and cropped vertically—distancing them from the dimension of the screen. These photographs function as commodities and are a fragment of the already fragmented film. The Modernist tells the story of a seemingly frustrated artist who is obsessed with both current events and architecture. He sleeps on the couch in a sparsely furnished apartment filled with books on architecture and stylish accessories. He reads the daily paper which is delivered to his door, makes drawings and collages at a small table by day, and during the night visits iconic homes equipped with matches and a gallon jug of flammable liquid. Viewers are aghast to see iconic homes such as the Chemosphere by John Lautner and Sheats Goldstein residence threatened by flames. The only sound in the film is the sound of the artist/arsonist striking a match— an unexpected surprise halfway through the film. The power of igniting launches the viewer into the present, hyper-aware of the flames that have engulfed residences in both Southern and Northern California. The narrative appears to unfold as a dream, as it is unclear whether the protagonist is fantasizing about or actually causing destruction. The center point to his endeavors — something he consistently augments during the film and that can be seen as a large-scale reproduction in the gallery, is a wall-sized collage created from clipped news headlines, images and advertisements that tracks the artist’s growing desires and frustrations, and obtusely provides insight to his motivations and actions. This collage, like Opie’s film is an attempt to dig through layers of architecture, cinema, art, politics and history in order to make sense of how contemporary culture got where it is today. The Modernist is an ambitious, albeit academic project, a work that draws from myriad sources like Marker’s La Jetée, Hollywood Noir and the experimental nature of modernist architecture, in order to draw relationships between an artist’s vision and the path to realizing one’s dream.