William Powhida: After ‘After the Contemporary’
The Aesthetic Prankster 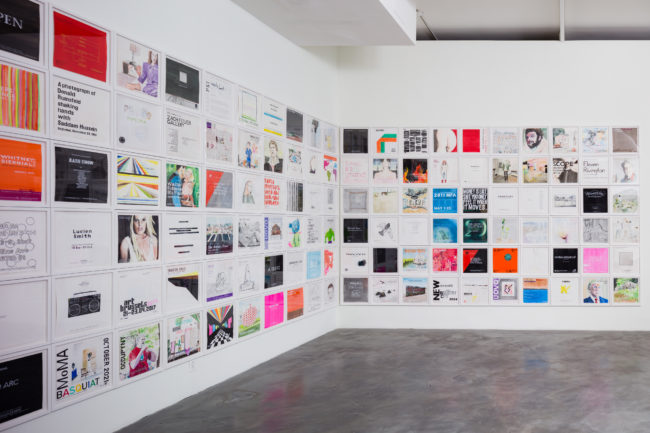 After ‘After the Contemporary’


William Powhida is a New York-based artist whose work often looks critically at the contemporary art market. He openly satirizes and attacks aspects of the art world and is unabashed about using his critiques for his own advancement. In an exhibition at the Aldrich Contemporary Museum of Art in 2017 entitled After the Contemporary, Powhida explored the relationship of the artist to the art market. His exhibition at Charlie James Gallery continues this investigation.

After ‘After the Contemporary’, presents a grid of 120 hand-painted advertisements that actually did appear (2000-present) and might appear (2019-2025) in the magazine Artforum. These works are hung in chronological order and span two walls. The paintings of Los Angeles-based artist Dave Muller come to mind as Muller also creates loose images from appropriated art-based sources. However, one of Powhida’s goals is to point out the predictable patterns and myopic scope of Artforum ads by inventing new galleries and exhibition spaces. Within the grid, he reproduces ads by Prada, Hauser & Wirth, Gagosian Gallery, and Bruno Bischofberger, who usually advertises on the back cover of the magazine. A full-page Artforum ad is expensive, so only these blue chip galleries can afford them. Surprisingly, Powhida includes images of protest or commemoration within the array, for example 9/11 (2001), an image of the second plane flying towards an already burning World Trade Center tower and Central Park Iraq War Protests (2003), which depicts a crowded rally. As the trajectory moves from past to future, Powhida invents new spaces and predicts partnerships among the elite galleries like Blum Poe & Kordansky showing Jonas Wood in 2022 or a Jeff Koons exhibition at Gagosian + Zwirner Edition in 2025. For those in the know, Powhida’s Artforum ads are simultaneously hilarious and off-putting. Curious predictions include ads for Mark Bradford at Hauser & Wirth Public, El Paso (2024), an announcement that Sotheby‘s and Christies have become SAC holdings (2023) and an exhibition at the Queens Museum (2021) for Occupy NY (A Decade of Resistances, Radical Images: 2011-2021).

The trajectory from past to present to future is more matter-of-factly outlined in the drawing Timeline of ‘the Contemporary’ (2017). In this black and white work, Powhida puts contemporary art into the context of world politics and economic ups and downs. He charts the beginning and end of art fairs, new museums and even snidely imagines the 2022 death of artist Jeff Koons in an UberAuto accident. While this drawing is a cutting and satirical look at the art world, it is not without humor and irony. Powhida has a reputation for being confrontational and uses his work to lampoon the commercial art market. He is simultaneously an insider and outsider, and operates comfortably as both. If he were simply an outsider, he would not show in reputable galleries and museums. Because of his status he can do and say what he pleases. Powhida’s work is also personal and political. It says, ‘look at me’ while simultaneously calling attention to the powers at play in the contemporary art world, specifically what happens to be represented in Artforum magazine. No doubt Powhida is a well-read and inventive artist who has studied the past in order to predict this biased future.

All Photos: After ‘After the Contemporary’