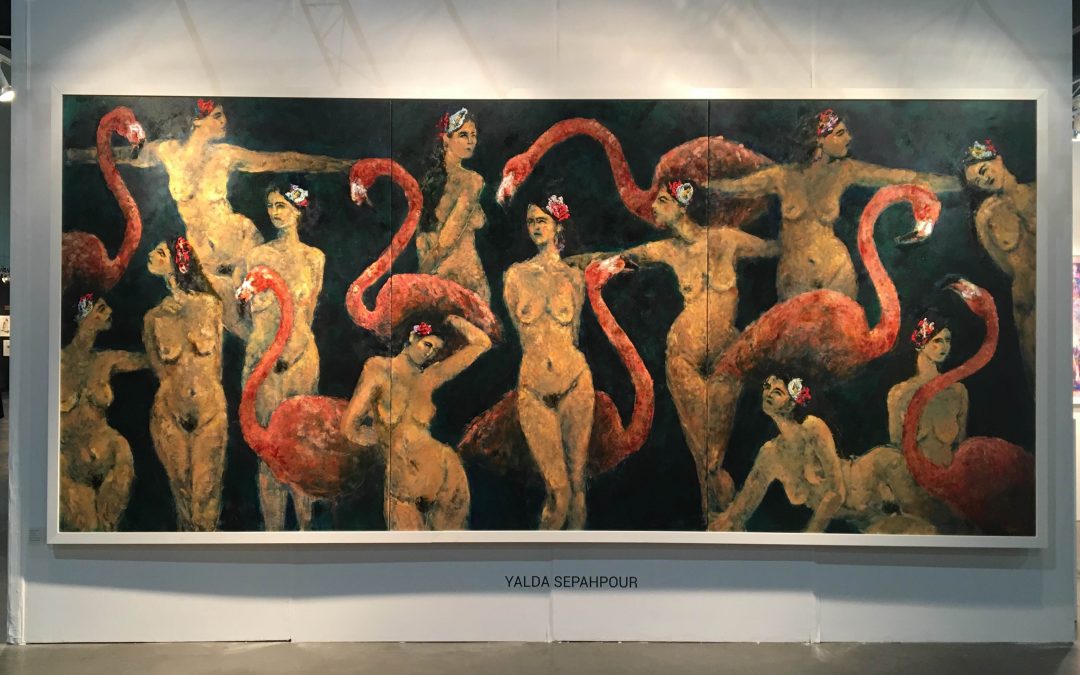 
Showcasing new and old works from Los Angeles galleries and from around the world, this year’s iteration provided an extensive and contemplative artistic experience. (Drinking also added to the visual festivities!) An installment of Gas Light Love Bomb encouraged attendees to reflect on their own experiences and perceptions of love. (We decided to take the ‘Go Fuck Yourself’ route…) Greg Auerbach’s politically outspoken sculpture, featuring more than 100,000 pennies, commands viewers to contemplate the current climate in the United States, as well as the ways in which capitalism both exists within – and subverts – American ideals. (Not exactly ‘pennies from heaven,’ but WTF!) Presented by bG Gallery, Matt Elson’s Infinity Boxes brought attendees head-to-head as they peeped inside and explored the seemingly infinite world of mirrors and lights surrounding them. (Vanity, thy name is woman!) Described by the artist as “a space to unload the anxiety or repulsion towards the images of international dictators/leaders that run specific structures of power,” Antuan’s installation Left or Right invited passionate displays of defiance. (Our left hook needed improving, but what the hell!) Enigmatic artist and designer Pandemonia (left) during one of her post-pop Flash Bulb performances. (Hmm…) Yi Hwan Kwon’s Rocky transforms one of the Italian Stallion’s most famous scenes into one of his unique illusory and perspective manipulating sculptures. (“Yo, Adrian, I did it!”) Vance Lorenzini’s 12 Stations of the Cross from his installment HEY MAN intimidate, confront and provoke, as viewers (at least this one) attempt to decode them. Photographer Tyler Shields has amassed a large following on social media: His work is unmistakable, edgy and frequently features celebrities in a more vulnerable light than is thought typical. (We advocate ditching the straw, though, as it’s become a symbol of environmental sludge.) Lea Fisher’s Go With the Flow is a mesmerizing mixed-media work with a wild array of colors and a soothing fluidity. (Not your grandma’s afghan!) Lefty Out There AKA Franco Campanella, in keeping with his Chicago street art roots, created this work during the show’s opening night gala. (“Please pass the spray paint.”) New additions to the series PUNKBUDDHAS by artist Metis Atash shimmer brilliantly with a generous amount of Swarovski crystals. (Ohmmmmmmm…) Mads Christensen’s work continues to explore the relationship between light and emotion through his installation Light and Line. (It works for us!) Presented by Denis Bloch Fine Art, Matt Smiley’s Lessons in History brings together acrylic and graffiti tactics to vocalize a universal angst that exists within each of us. (Amen to that!) What started as a blank canvas with surrounding sheets turned into an abstract mural created throughout the duration of the show by artist Saber. Looks like he had quite the time – and what a time it was. (Thanks, LA Art Fair!)