Reasons To Rejoice
Highlights From A Low Year 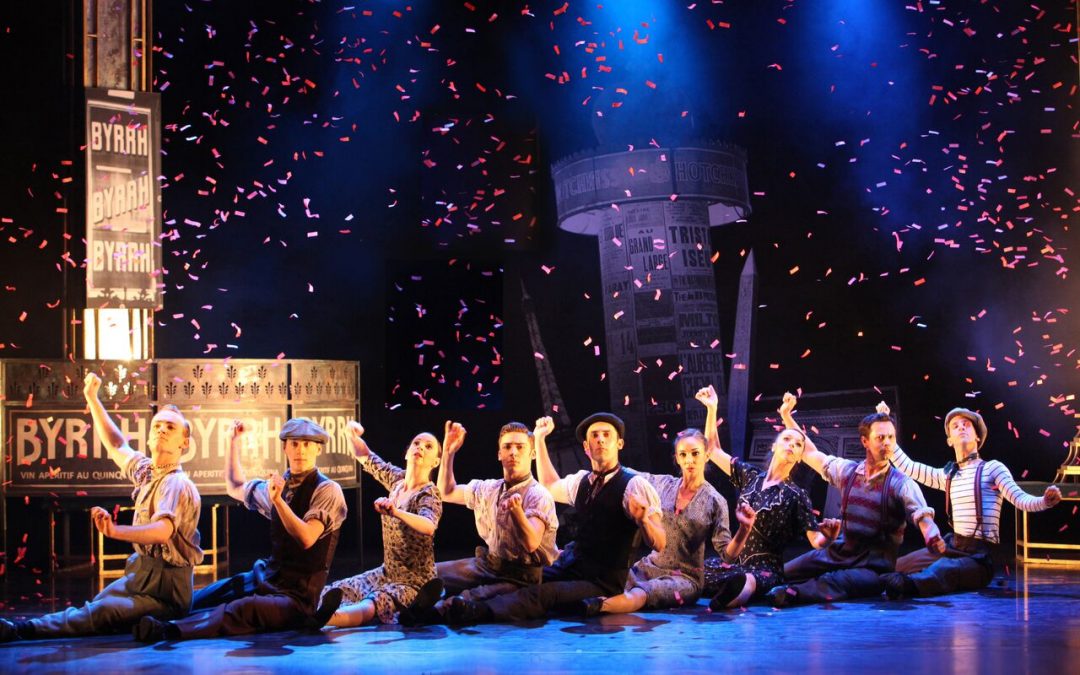 If ever there were a time when art was needed, this is it. The year that began—and continues to this day—with a Twitter-happy and some would say, deranged lunatic sitting in the Oval Office could only, at every twist and turn, benefit from the grace, beauty and power of art. That the #MeToo movement has also encompassed wide swaths of politics, Hollywood, journalism and yes—even the dance world—is both emboldening and sad.

Still, because dance endures as a particularly effective balm, with the body speaking volumes, this is reason to rejoice. Indeed, of the many dozens of performances this writer saw in 2017, there was something worthy to be found in each one, be they on stage, on location or on film. But for the sake of brevity—and in no particular order—then, here are the dance highlights from the last year. Part Kubrickian, part Wilsonian (as in Robert), with a nod to Isadora Duncan, Lita Albuquerque’s hEARTH, kicked off the inaugural exhibition, Desert X, at Sunnylands Center and Gardens, with a performance installation created with her daughter, choreographer Jasmine Albuquerque (formerly of the dance trio WIFE), and composer Kristen Toedtman.

The performance, attended by what looked like a hipster pilgrimage, featured dancers Danny Dolan, Danny Axley and Jasmine, and 15 members of the Los Angeles Master Chorale who performed Toedtman’s original composition (with a libretto by Lita). The 40-minute work saw the dancers running, jumping and frolicking in the grassy area of the estate, as well as moving about a mandala-like bed of crushed marble, the centerpiece being Lita’s lifelike ultramarine blue sculpture, her daughter having served as the model that was meant to resemble a Laocoön sculpture from ancient Greece.

From the jubilant to the sublime, Japan-born Oguri, his wife Roxanne Steinberg, and her sibling Morleigh Steinberg, delivered an elegiac performance in response to the death of Oguri’s mother. Haunting, imagistic and mesmerizing, the new work, making use of John Gibson’s minimalist music, unfolded like a prayer, offering much-needed relief from the outside world’s harsh happenings. In truth, one can never get enough Oguri, who, in a recent solo performance, delivered a staggering dance that moved from impish (he entered amid the audience while pressing his face against a pane of glass) and jaw-dropping (balancing atop a riser on a highly arched foot), to devotional, Oguri ended the work nearly naked save for a genital sock and huge bouquet of flowers, a dancer’s gift to his admirers instead of the reverse.

Another gift was Martha Graham Dance Company performing early masterpieces, including Cave of the Heart (1946) and Diversion of Angels (1948). Staged by artistic director and former Graham dancer Janet Eilber, and accompanied by wild Up ensemble conducted by the dynamic Christopher Rountree, the works looked splendid. From articulated footwork to high extensions, the dancers do Graham proud as they carry on her indomitable legacy. Terpsichorean history was also on view at Segerstrom Center for the Arts when the Mariinsky Ballet and Orchestra roared into town with an all-Fokine program. Four works, including The Swan and Schéhérazade, were a study in meticulousness, the dancers magnificent, assured and oh-so-Russian. The foray into Orientalism, although a culturally misogynistic ballet (the pervasive shadow of Harvey Weinstein loomed large), was, nevertheless, a feast for the eyes and ears. Live music—Richard Strauss’ 1924 Schlagobers—also buoyed American Ballet Theatre’s world premiere, Whipped Cream, a collaboration between ABT’s choreographer-in-residence Alexei Ratmansky, and visual artist Mark Ryden (and also at Segerstrom). This $3 million, two-act fantasia teemed with Ratmansky’s intricate patterns, glorious leaps and fine partnering, all of which managed to stand out amid the oversized heads and enormous stuffed animals in this cross between Willy Wonka & the Chocolate Factory and the booze-infested flick, Lost Weekend. An avid movie buff himself, Sir Matthew Bourne—and pals—made two very different appearances in the City of Angels this year. In May, he brought his Early Adventures troupe to perform three playful, loving and naughty works dating from 1989-1991, all showing glimmers of the Bourne brand that would soon put him on the choreographic map (cover image). In September at the Ahmanson Theatre, the Brit’s main company presented the North American premiere of his dazzling dance-theater piece, “The Red Shoes,” an inventive rendition of the 1948 film of the same name, with Bourne’s singular vision giving the work instant classic status. Mecca Vazie Andrews and the Movement kicked off summer with an ebullient site-specific work at Tongva Park. Cycle Squared Circle Triangle—Blue in Green, made use of the park’s walkways and sleek minimalist architecture, with the dozen dancers offering a host of moves that included unisons and arabesques aplenty, and Andrews ripping through a fiery, hot-footed solo. It’s always a thrill when Garth Fagan Dance, now in its 47th season, comes to town, and thrill they did. Still at the top of his game at 77, Fagan brought the West Coast premiere of his glorious In Conflict (2016), a work that spotlighted Natalie Rogers and is set to the transcendent music of Arvo Pärt. Rogers, who joined the troupe in 1989, stuns with stellar technique, emotional heft and unbridled stamina. Another Fagan veteran, Norwood Pennewell, still dancing at 58, has also evolved choreographically, with his 2016 work, A Moderate Cease, a Titian painting come to life.

Also unstoppable is the luminous octogenarian Simone Forti. In Rematch, at Highways Performance Space (happy 29 years!), Forti and Carmela Hermann Dietrich presented a thought-provoking improvisational duet that ended with the pair balancing on a see-saw of their own devising, an apt metaphor for our times.

Anniversaries abounded this year, with Diavolo | Architecture in Motion™ celebrating a quarter century with day-long performances at Valley Performing Arts Center. Jacques Heim’s troupe slayed with ingenious choreography executed on, around, under and in the company’s signature outsized structures. From breathtaking swan dives to deploying split-second moves, Diavolo defines life in the 21st century with humanity, finesse and resolve, its Veterans Project: Phase 2: A Long Journey Home, especially potent. Add to the longevity list Hubbard Street Dance Chicago, founded in 1977 by Lou Conte and under the deft direction of Glenn Edgerton since 2009. The company performed at the Irvine Barclay Theatre and looked racehorse-sleek, sinfully sensuous and altogether in command of a diverse choreographic palette that included works by Nacho Duato and William Forsythe.

And talk about mind-blowing: CAP UCLA’S Kristy Edmunds brought Dancenorth/Lucy Guerin Inc. to Royce Hall, where they performed Attractor, a collaboration between choreographers Guerin and Gideon Obarzanek, with the Indonesian musical duo, Senyawa providing live explosive soundscapes. A work for the ages, it gave voice—and body—to a world gone mad in a series of hallucinatory scenes that were akin to a ritualistic, twerky-jerky rave. Ending with 20 unrehearsed volunteer movers on stage with the professionals, this gut-punching, primal scream-like dance proved artistic fortification for our troubled times. And since we can never get enough ballet, kudos go to Los Angeles Ballet, now in its 12th season, with the company presenting Balanchine: Master of the Dance, including a rousing Divertimento No. 15 and and an exquisite Prodigal Son. So, too, did Miami City Ballet charm with its world premiere Nutcracker. Making use of Balanchine’s 1954 choreography, this Music Center of Los Angeles world premiere production featured opulent new sets and costumes by Isabel and Ruben Toledo.

There were also great finds in film, theater, books, opera and art – indeed, too many to mention – but here are a few (and for the coolest in woke art, please browse this site): Call Me By Your Name, directed by Luca Guadagnino (he helmed the divine I Am Love starring Tilda Swinton in 2010), a sumptuous coming-of-age tale set in a small town in Italy; Film Stars Don’t Die in Liverpool with the magnificent Annette Bening as film noir star Gloria Grahame, and a wonderful (all grown-up) Jamie Bell; A Fantastic Woman directed by Chilean Sebastian Lelio; P.T. Anderson‘s glorious A Phantom Thread, starring Daniel Day-Lewis in what the thespian says is his final acting role; and lots of NETFLIX goodies, including The Crown, Erroll Morris‘ Wormwood and another great true-life series, this on a dead nun, The Keepers. Finally, there is Spy of the First Person (Alfred A. Knopf),the achingly sad and final work from the multi-talented Sam Shepard, who died from ALS at 73 in November. Theater brought us the wonderfully witty musical Fun Home at the Ahmanson, while the Wallis Annenberg Center for the Performing Arts presented Simon McBurney‘s brilliant, The Encounter and Peter Brooks‘ ever relevant Battlefield. Los Angeles Opera gave us a dazzling The Pearl Fishers, by Bizet, and Plácido Domingo sang his now-baritoned heart out in Verdi‘s Nabucco (above). The megastar was also honored for his 50 years in opera at a gala concert that included such disparate voices as Uzo Aduba (Orange is the New Black) and the stellar soprano Ana María Martínez. Another magnificent soprano is Jamie Chamberlin, who soared in the title role of Pacific Opera Project’s savvy staging of Donizetti‘s Lucia di Lammermoor. With Nathan Granner as Edgardo, the performance took place at – gulp – Forest Lawn Memorial Park, and as a wonderful coda, Granner proposed to Chamberlin several months later at a Verdi Chorus concert during which the pair also sang. Best of luck to this operatic twosome, who, btw, will be singing in Long Beach Opera‘s production of The Invention of Morel, composed by Stewart Copeland (the erstwhile drummer of The Police), with a libretto by Jonathan Moore, who also directs three performances in March.

Wow! With such an array of wonderful works behind us, here’s hoping that 2018 will not only bring peace, prosperity, happiness and health to all, but an abundance of the arts. We’ll drink to that! The dance highlights of this story were originally published by Fjord Review December 23, 2017.