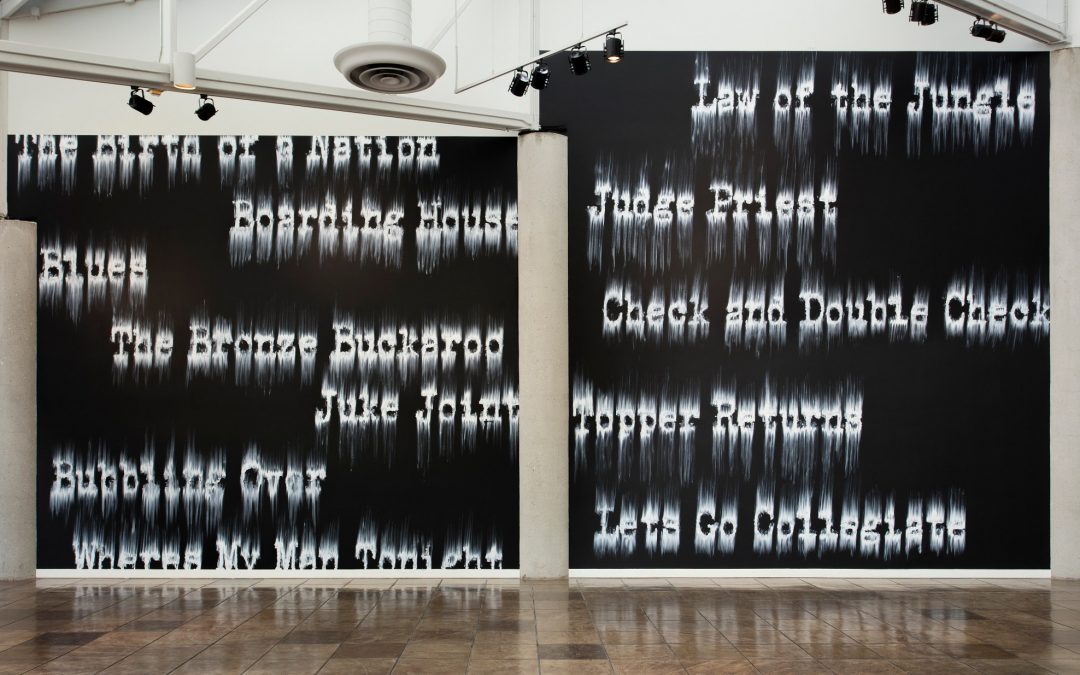 Gary Simmons’ stunning installation Fade to Black (2017) at the California African American Museum takes command of an otherwise utilitarian lobby space. Simmons has painted the large walls a deep flat black (referencing a chalkboard) and using a distressed typewriter font, has beautifully graced them with white lettering featuring the titles of vintage silent films that featured African-American casts. The painted letters are smeared and presented to suggest scrolling film credits and read like found poetry. Simmons has perfected a technique he began in the early 1990s in which he paints words or images on a ground (be it a wall or page) and then methodically begins smudging and erasing to evoke a ghost-like presence. “It’s really about traces and fragments left behind — ghosts,” he says. “There’s a strength in the absence of presence that I’m interested in.”

Because of Los Angeles‘ ties to film production, Simmons’ installation resonates on multiple levels. Formally, it is beautiful. One’s eye travels across and up the architecture of the space, resting on the strategically placed titles that inhabit the five walls. Some hug the walls’ edges giving the illusion of scrolling up and down as well as moving horizontally across the space. The words in the titles become poetic fragments rich with racial allusions: The Bronze Buckaroo // Juke Joint // Bubbling Over // Whereas My Man Tonight. While some of the films like Birth of a Nation are familiar, many others are not as well known today. In Fade to Black, Simmons’ intent was to invoke the actors and films that have faded from memory and honor those who were never recognized because of their race. Simmons’ concurrent exhibition at Regen Projects continues this investigation. While the walls of the museum are painted a flat black and covered from floor to ceiling with partially erased names of films, at Regen Projects, Simmons creates canvases in muted tones of gray that highlight the names of the actors who were featured in the films. These works (some at billboard scale) are nuanced and layered. For example, in Law of the Jungle (2017), the actors’ names— Hattie McDaniel and Bill (Bojangles) Robinson are painted white and large, then wiped by hand, in the foreground, while the films Law of the Jungle, Midnight Shadow and Blood of Jesus, are in a smaller font in a light gray tone and blurred to a greater extent so it seems they are floating—as if into obscurity— in the background. The final layer in this work is a line drawing of a cartoon crow— an image Simmons has used before— representing racist characters that were prominent in cartoons of the 1930s and 1940s. Similarly, a smaller work entitled Lena (2017) juxtaposes the blurred and partially erased name of the actress with racist cartoon imagery, both submerged in a sea of painted gray.

In the monumental wall sculpture Balcony Seating Only (2017), Simmons has painted and partially erased the word COLORED on a black wall that functions as a railing enclosing a set of black stairs that leads up the black gallery wall to nowhere. The stairs reference the balcony seating accessible only from the side or back of the theater, that African Americans were directed to access in order to keep them separate from white film viewers. The works on view in the museum as well as the gallery, bring back ghosts of the past and shed light on “that sense of erasure, how you recall, how certain images become memorable and others disappear.” Simmons continues to call attention to the injustices endured by African Americans through referencing and distilling specific moments in American history. In making this body of work, Simmons researched African American actors, actresses and films, and presents these names as partially obscured representations and graphical abstractions, implying that history and memory of African Americans have a presence and can never be totally erased.