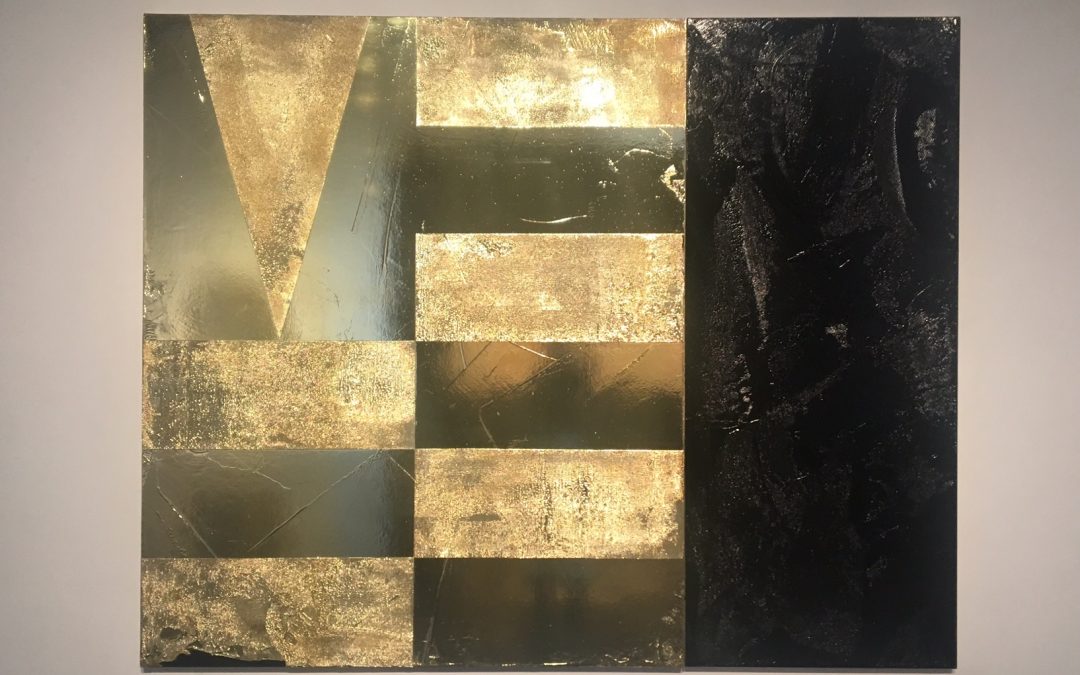 
In his new exhibition, Southern California-based artist Jimi Gleason grapples with the same flamboyant materials he has been utilizing and perfecting for years. His sophisticated abstractions make use of a number of innovative, simplistic phenomena that give the works a certain magnetism. Indeed, in Reflected & Absorbed, they whirl and maneuver throughout the brilliant compositions, the eye of the viewer and the surrounding environments. The pieces are also are refreshing. Not only paintings and not yet sculptures, they utilize a delicate recipe of chemicals, including silver nitrate, which could be the magic ingredient that gives the works their radiance. The use of these materials creates a sensitivity to light, and thus also a sensitivity to the position of the onlooker. The first room features the reflective pieces, which inherently invite viewers to feel that they are one with the art. It is important to note that these “reflection” works are not perfectly smooth mirrors, but are wavy and wrinkled in some areas, and especially textured. Like foggy mirrors created by a marvelous thick impasto paint, this reflectivity is accompanied by opaque segments as well. Many of Gleason’s paintings juxtapose the two mediums, causing the metallics to dance and confront one another. This is apparent in Brooklyn Bridge (cover photo), a grid-like checkerboard dance between the mirrored surfaces and more opaque panels. These gridded objects are both abstract and literal, enhancing the innovation that comes with Gleason’s approach to medium.

The canvases vary in size: One piece in particular is a horizontal rectangle, several feet long, and golden with a flakey, inch-thick stripe running through it. This work reflects the rest of the exhibit as well as the viewer, rendering it almost conscious of what it is. Though that clarity is soothing, there is something robotic and extra-terrestrial about its consciousness. What begins as a display of mainly silver, gold and blue works transitions into more iridescent color palettes throughout the show. Leading into the second room are works such as Save The Robots and StraTo-Kine, which juxtapose solid dark blocks of color with applications of reflective color. One cannot help but think of the spectroscopy scales used in the scientific realm. This makes sense. After all, Gleason’s work is a study between matter and radiation.

The second room continues with colorful palettes, thick impasto paint, and material reflectivity, though the reflections shine through the floor and less so on the viewer. Treated in such a way that they are not reflective, these silver nitrate pieces look more like iridescent shells. Though no longer seen within the canvases, the viewer is still in control of the “absorbed” pieces’ appearances. Their position in regards to each piece dictates how the light shines upon the canvas, and in this way, the viewers are still at once the subject and the puppet of the images.

Also featured in the second room are a diamond-shaped canvas and a square canvas set side by side, the diamond covered in blues and purples, the square incorporating black on its surface. This spectroscopic decision brings to mind shells before they are fully polished, retaining the raw power of the sea. There is also a radiant gold canvas in this room, Scarletts Gold, a work almost byzantine in its metallic brilliance. Oscillating in their color and texture, works, including Pink Shell, appear to be waves in a hallucinogenic ocean, illusory yet natural. Also featured here are smaller panels lined up side by side, the repetition of these surfaces becoming meditative, as the viewer becomes absorbed, following the colors and patterns of these foreign relics. Due to their inherent atomic qualities, Gleason’s innovated universe is comprised of soothing, albeit, otherworldly works.