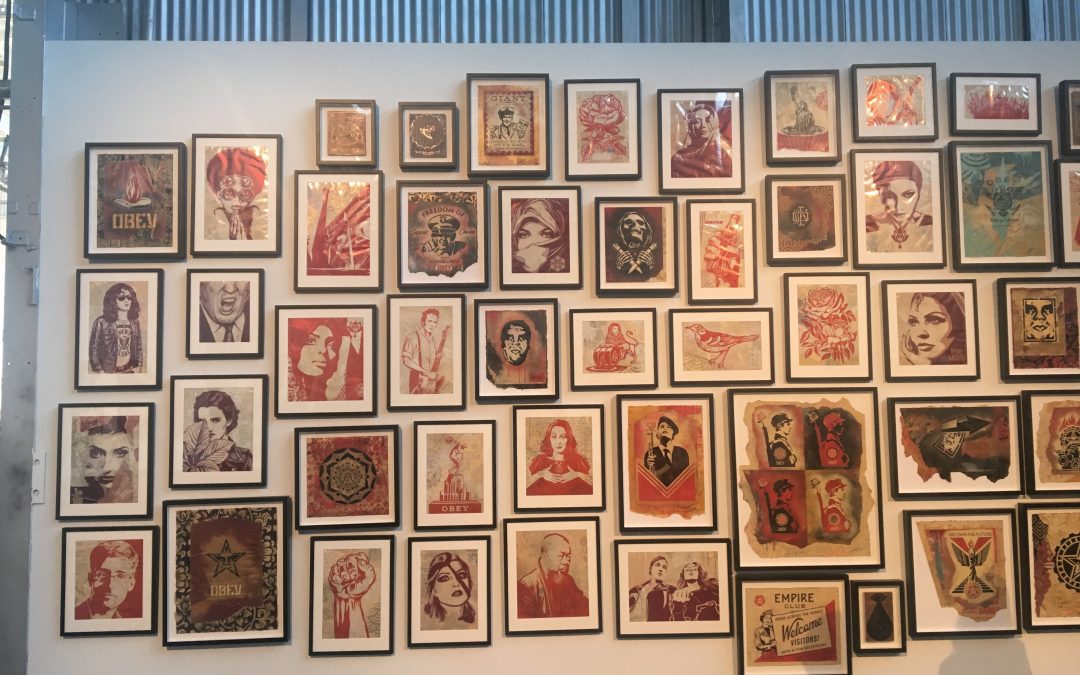 If you have seen that graphic of Barack Obama with the word “Hope” plastered on it, you have been confronted with the work of Shepard Fairey. Graphic designer, street artist, activist and founder of OBEY Clothing, Fairey has always been fueled by propagandist exercises of control. Unlike many artists who opt for politically-charged pieces once they have explored other, less polarized realms, Fairey has been doing precisely that since his years at the Rhode Island School of Design nearly three decades ago.

Described by the New Yorker as “the most efficacious American political illustration since “Uncle Sam Wants You” the Obama “HOPE” poster was not initially a no-brainer for the artist.

In a 2008 interview with the HuffPost, Fairey describes the origins of that image, saying, “In my past as an artist, I’ve always worked as an outsider and I’ve always decided not to go through the bureaucracy…I really wanted to help and I didn’t want to be that unwelcome endorsement or affiliation.” He also attributed the success of the work to the public’s desire for an image to encompass their opinions, saying, “Once that exists, it starts to perpetuate and it replicates itself.”

In a February 2017 interview, again with the HuffPost, Fairey describes that his inspiration for art was his “reaction against the conservative structure” of Charleston, his hometown. “I discovered skateboarding and punk rock, which gave me a rebellious, creative alternative to Charleston…which was very therapeutic.”

Where does one go from such a timely, impactful and enduring cultivation? In his latest pop-up installation, Fairey addresses just that. Running for about a month, Damaged is the largest solo exhibition the artist has yet had in Los Angeles. Upon entering the warehouse, attendees are greeted with what seems to be a reconstruction of his studio, complete with spray cans of paint, a record player, a selection of his posters, a printing press sculpture, and stacks upon stacks of invented newspapers with the headline “MANIFEST DENSITY! Or can we wake up from the darkness?” These newspapers, along with posters and his signature red “OBEY” stickers, are distributed for free.

Another room is lined with posters of faces both familiar and foreign, a constructed newsstand called THE DAMAGED TIMES, a telephone booth that reads “amplify your voice,” and a more massive artwork, consistent in medium with the others: a combination of paint, spray paint, stencil, varnish, paper, canvas, and more. This work, entitled Wrong Path features words like “equality” and “revolution.” With the face of a woman, the piece addresses the difficulty of immigrating to and becoming an accepted member of the United States, particularly under the current administration. Within this room is a smaller room projecting a film about Fairey, in which the artist explains the pressure that has been thrust upon him, making him appear a ‘one hit wonder.’ He also explains that he is an “artist before an activist” because, to him, the thought of labeling oneself an activist is inherently lacking. In a particularly powerful scene, Fairey, alongside thousands of others, holds up his We The People poster during one of the many women-centric protests that followed Trump’s inauguration.

One gets an overwhelming sense of Fairey’s essence: Having created yet another image that very well may define a generation, he carries it along with the public, genuinely immersed in what that image signifies.The film ends with a text explaining that there are charges against Fairey for destroying property in Detroit, which could earn him 10 years in prison – reminding viewers that his work is, at its core, street art that is unwavering in its rebellion. Another room features yet more posters – not all focused on portraiture – a pair of sculptures, each of a man (with half-skeletal heads), reading a newspaper with the headline Go! Go! Go! and a large billboard screaming the words YOUR AD HERE!

For art that is so honestly confrontational, the almost satirical appropriations of classical propaganda seem a bit superfluous, and it is then that one should be reminded of what Fairey said about being an artist first and activist second. His exhibitions are not political campaigns; they are interactive installations with motivational force, completely aware of their power and the power of their viewers.

Through his political campaign posters he utilizes the face of someone who embodies those issues for which he stands. With this recent work, he is instead individually addressing each of the issues so prevalent in modern day American discourse. Surrounded by images of people and concepts that have come to define the current resistance, the viewer can’t help but feel the exercising of freedom, complete with undertones of anger and longing.

Confrontational and numerous, his portraits stare at viewers in their careful pigments, iconography and diction. The newspapers symbolize the media, so omnipresent and organized, and by giving away The Damaged Times to exhibition attendees, the public thus becomes literally in control of the “damage.” After all, Fairey’s goal is to make people realize their power to insinuate change, with the knowledge they already have, and with it, the stories that they are fed so regularly. Each piece in the exhibition overwhelmingly confronts its own nuanced issue. Set alongside one another, these works illustrate the magnitude of damage control there is yet to accomplish. Like a museum, these images are the tools, artifacts and weapons that have been and are being used to bring about revolution. Familiar but not comfortable, these tools are beautifully aggressive invitations to contemplate themes such as racial bias, sexism, corruption, the environment and the role of the media. Though the word “Hope” is not explicitly pasted on all of the posters Fairey creates, the concept continues to be the driving force within all of his work.