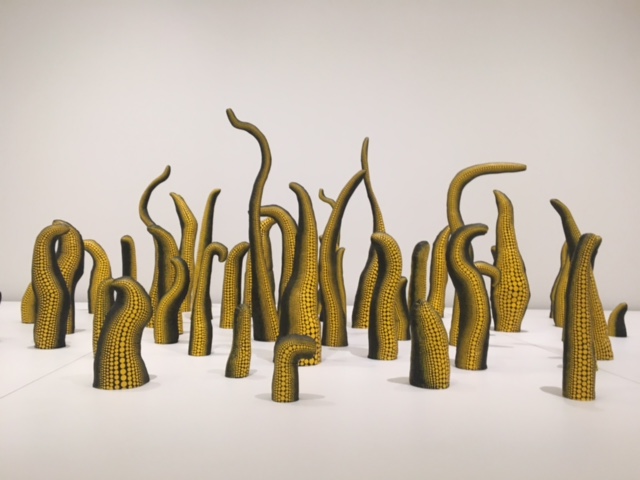 
Born in Matsumoto, Japan, and on the cusp of 90, Yayoi Kusama is currently being showcased around the world, with images from Infinity Mirrors flooding social media and smart phones everywhere. One thing is certain: Kusama’s vision is as prolific and enduring as her artistic talents. This exhibition presents works from the 60s to the present, pieces that stem from what have always been Kusama’s mission – to explore, to abandon, to embrace, and to unite. These qualities establish the show as a truly meditative, albeit an astronomical one, commanding viewers to consider what Kusama is so unabashedly and wholeheartedly devoted to – peace. Upon entering the museum, viewers are greeted by large beach ball-like sculptures, their hot pink hues popping with polka dots, a Kusama hallmark. There is also a video of Kusama in which she discusses her theories and motivations, explaining that her, “huge adoration of the concept of infinity” and her belief that “the effect of infinite, constant repetition leads us to finding our ever-expanding hope.”

Museum-goers also have the privilege of spending 30 seconds in the Infinity Mirror Room – The Souls of Millions of Light Years Away, a reflection on infinity and our place in the universe, with the next room featuring Dots Obsession, a mirrored room encasing those glee-inducing pink beach balls, as well as a kaleidoscope-like sculpture.

The viewer then encounters Kusama’s Accumulations. Beginning in the early 60s, the artist began constructing phallic forms to conquer her fear of sex, with the next installation room housing Phalli’s Field, where the mirrors create the repetition of phallic shapes with red spots. The viewer is once again the subject, seemingly surrounded by the sprouting field of tiny sculptures. One can imagine the overwhelming feeling Kusama had in creating this work of reconciliation.

Following the Infinity Nets paintings, which feature repeated loops with no set pattern or formula, is the mirrored room Love Forever. Viewers don’t step into the structure, but instead poke their heads through either of two windows, transporting one into a kind of video game-meets-grand ballroom-meets-Tokyo robot restaurant. Though playful, the work amplifies both your own face and that of the other person, connecting the two in a celebratory experience of each other and also of what lies between them

Aftermath of Obliteration of Eternity, a mirrored room, is an ode to life, death, and soul commemoration, with All the Eternal Love I Have for the Pumpkins in the next room, which is, oddly, the only room in which photographs are strictly prohibited. The concept of the soul courses through the exhibition, and the next room teems with whimsy: paintings and sculptures the Broad describes as “surrogates for human souls.” They are irregular in shape and form – the reason for Kusama’s love of pumpkins – dotted and warmly geometric.

Finally we come to, The Obliteration Room, a collaboration between Kusama, the Queensland Art Gallery and – no surprise – the viewers, who are given a sheet of polka-dot stickers upon entering and are encouraged to place them on all of the room’s surfaces, masking the original whiteness and creating something new in a collective manner.

Many have said that Kusama must be horrified at all the selfies – works that are supposed to obliterate the self are being appropriated for merely their aesthetic seduction. But the mission of the work isn’t powerful because it obliterates the self, it is powerful because it puts the self in perspective, establishing individuals as pieces of an infinite galaxy. As you stand in each mirror room, you begin to see yourself as part of the vastness, at once bouncing off the walls and fading into the sea of millions. Though viewers are positioned among thousands of other orbs of light, polka dots or pumpkins, they cannot escape their own reflection. Kusama’s deeply personal work taps into a yearning buried deep within the universal unconscious – a yearning to exist and to be special, but at the same time to be able to do something that will impact our world, and in the process, contribute to a universal harmony –  just as Kusama has always done and continues to do.