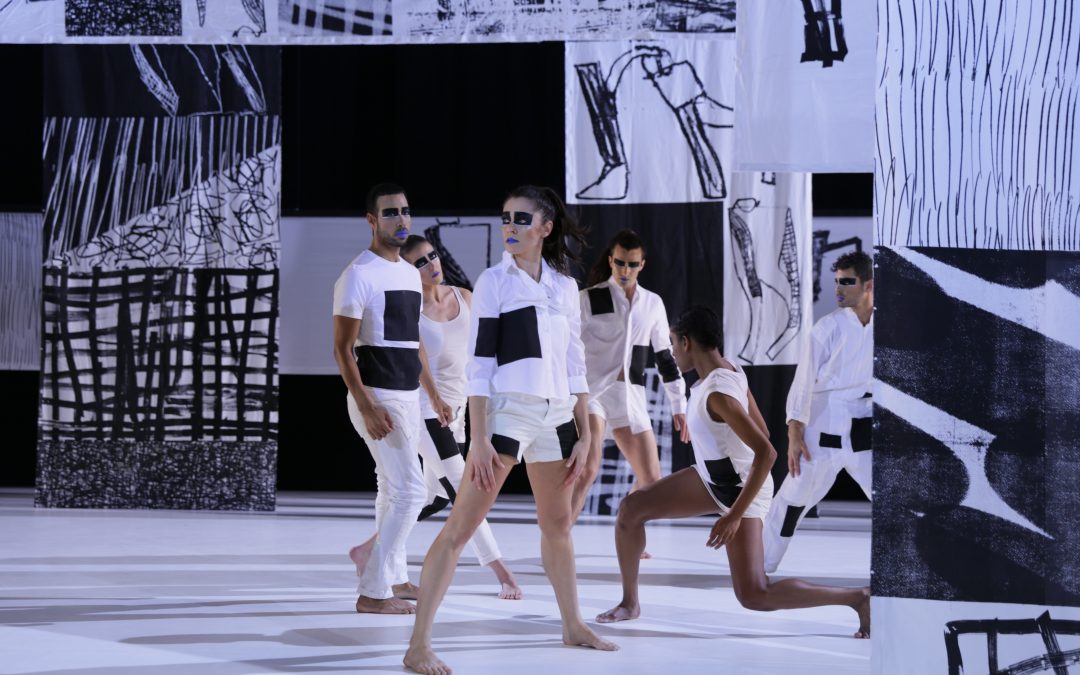 No matter how many bells, whistles and special effects are deployed in a dance, if the choreography isn’t there, the exercise/event borders on being pointless. To wit: the two-act Tesseract, a collaboration between filmmaker Charles Atlas and choreographers Rashaun Mitchell and Silas Riener, who happen to be very good movers. That this trio also comes with a first-class pedigree – Atlas served as filmmaker-in-residence for Merce Cunningham for a decade from the early 1970s through 1983, and Mitchell and Riener both danced with the postmodern genius during the troupe’s final years – upped the expectation ante while falling short on its deliverables. The first half of a two-part evening, Atlas’ film, Tesseract (the geometric term for a four-dimensional shape containing 8 cubes, 24 squares and 32 edges – essentially a cube within a cube), offers some spectacular effects by dint of the audience donning battery-powered 3-D glasses. A tad cumbersome, the specs, however, do the trick, albeit an overly long one at 45 minutes, and thus are we teleported through no less than six different sci-fi worlds with seven dancers.

There are desert landscapes, moonscapes, spoken word/gibberishscapes and bodyscapes – in one chapter Mitchell and Riener are enveloped in rope-like corsets and sporting nude jockstraps – with the black and white opening sequence evoking Kubrick’s 2001: A Space Odyssey (sans the Ligeti or Strauss, but the film does boast an original score by electro-acoustic musician Christian Fennesz). These hypothetical universes veer from brilliantly-colored acid-y trips to a vaporous state in which dancers Cori Kresge and Hiroki Ichinose offer a trance-inducing pas de deux (Victor Lazaro is credited as the Steadicam operator for “fog”).

As for other portions of the film, dancers are also in a constant state of flux – and costumes, including wigs, Rei Kawakubo-esque lumpy jumpsuits and rompers (all by Mitchell and Riener, with assistance from Mary Jo Mecca and Yvette Helin in Part II). And while the “storyline” of the work is secondary to the form, Mitchell has said that the work “showcases the individuality and strength of one person, magnified by the collective action and support of others.”

Be that as it may, with too many robotic and faux animal movements superseded by Atlas’ visuals and the ongoing shift of perspective – too precious, at times – one longed to see the dancers in the flesh. Alas, the live performance, while also featuring stunning visuals, with Ryan Thomas Jenkins operating the Steadicam on stage (wearing a hot pink satin suit, his Liberacean sparkly silver shoes were also a nice touch), there was a relentless and repetitive element to the choreography that seemed stuck on shuffle: Alternating between running, lunging, jumping and windmilling arms and helicoptering legs, the vocabulary, which often mirrored geometric paths and occasionally hinted at Cunningham (oh, to see the master’s 1999 Biped again), was, for the most part, less than exhilarating.

When a sextet – David Rafael Botana, Eleanor Hullihan, Kate Jewett, Kresge, Mitchell and Riener, most of whom had been in the film – first appear on the bare stage, clad in white underwear and gauzy robes, there is a sense that this scenario might actually go somewhere. As the live video-feed is projected simultaneously onto a scrim suspended across the proscenium (and Atlas himself manipulating the images before projecting them onto said scrim), we can choose to experience the dancers live or be content to gaze upon their projected images.

Talk about a 21st century conundrum!

Is this a terpsichorean funhouse, a maze of mirrors, with a dizzying array of images sprouting like wild mushrooms, and where odd angles and perpendiculars are able to create a ceiling-dance effect? Shades of Fred Astaire (Royal Wedding, 1951) and Busby Berkeley came to mind, the latter dancing with his camera in the 1930’s, thereby creating kaleidoscopic patterns of gorgeous girls, while this sensory-overloaded series of tableaux ultimately proved that more is less. Sure, Mitchell danced a strong solo, with the electronic score also vibrational and the visuals vacillating between Rorschach-type blots, confetti and tangles of hanging fabrics (textile drops by Fraser Taylor). And make no mistake, it is art. But is it worthy of commanding attention for some 90 minutes?

While the camera absolutely does give us novel perspectives of the body in motion in time and space, how long can we stay engaged with a device that slants, shifts, enlarges and shrinks while performers seem ever more remote as they move about in this technological vacuum?

Groundbreaking as Tesseract is – and the makers are certainly to be applauded – the human element and emotional connections were, sadly, lacking. While this viewer was hoping for an immersive experience that would go beyond the purely ‘wow’ and move into the terrain of ‘yes,’ this was, like so much of today’s digitally-enhanced world, a super-glossy take on an ever-threatened existence.

This story was originally published by Fjord Review, December 3, 2017.