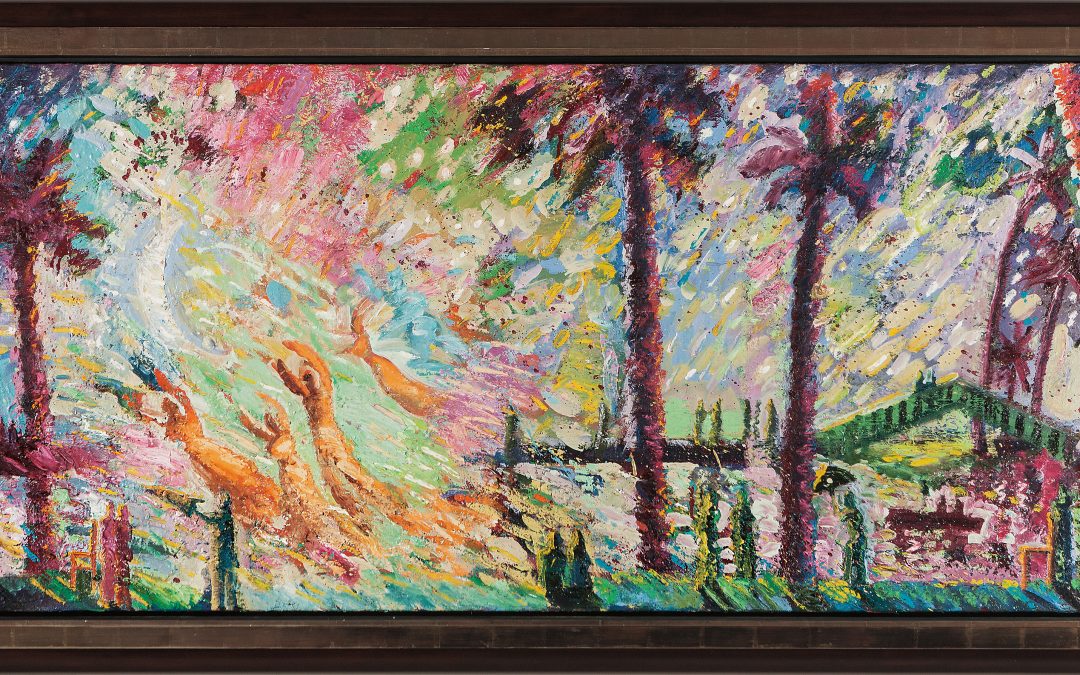 
“His life was contradictory and often conflicted, and he reveled in and avidly celebrated the complexities and contradictions of his identity and experiences…these connections and slippages, these crossovers and disconnects, these harmonies and dissonances constitute the enduring essence of Almaraz’s art.“ – Howard Fox Carlos Almaraz is celebrated in all fields of Chicano studies for his political activism, campaigns and guerilla actions of painting murals around Los Angeles. He strove to erase the invisibility of Chicanos in L.A. culture by promulgating the notion that Chicanos have a presence that has been steam-rollered by white normalcy. Almaraz’s political activism coincided with gay pride’s rallying call, “We are here and we are queer,” in the 1970s when feminists, Indigenous Americans, and Blacks began to assert their presence.

Almaraz furthered the notion that “identity” is acculturated by a combination of heritage, birthplace and education. Recalling Simone de Beauvoir’s famous dictum, “One is not born, but rather becomes a woman“ (The Second Sex, 1949), Almaraz demonstrated through his guerilla public art and activism that Chicano identity is a complex cultural construction.

However, Almaraz’s private identity as a gay man is expurged from most Chicano literature, compounded by the fact that he died in 1989 from AIDS at only 48 years old – cutting short his prodigious studio painting career. Almaraz was married to Elsa Flores (the mother of their daughter), a celebrated Chicano artist he deeply loved and admired – who also influenced his use of beautiful vibrant color in his later studio paintings. Howard Fox, LACMA’s former head curator of contemporary art, made a triumphant return as the guest curator of this landmark survey of Alamaraz’s last ten years of studio paintings, for Pacific Standard Time: LA/LA. Fox updates the canon on Almaraz by selecting 65 paintings that are more personal and psychological in order to show the conflicted inner psyche of the artist behind his political persona.

Fox notes, “The exhibition is thematically organized, not chronologically, because Almaraz returned to these themes over and over again.” He also quotes Gertrude Stein‘s adage – “You are what you repeatedly do.” By using this circular logic to show the repeated themes and recurring leitmotifs in Almaraz’s last paintings, Fox has curated one of the more visually and psychologically compelling exhibitions in PST: LA/LA. The first room displays Almaraz’s vision of a chaotic, riotous L.A that explodes with the fantastical, frenzied energy the artist loved with regards to visual and social chaos. The second room, a continuation of Almaraz’s love affair with L.A., is an idyllic, romanticized view of Echo Park and Hawaii, which is the flip side of his paradoxical vision. Fox explains that these paintings have more, “stately rhythms, because the people who move laterally around the front of the canvas are more self-possessed.” But on the opposite end of the gallery room, Almaraz explores domestic tranquility, stability and the familiarity of home – opposite the spectacle of a car crash. Now we see a mother and daughter on a comfortable red couch, petting a cat amid an array of domestic comforts. But the calico cat re-appears in another painting, bringing home dead prey in its mouth. The pretty kitty who looks so harmless is actually a predator and the prey in its mouth, paralyzed with fear, is almost invisible – like most victims. The third section of this exhibition focuses on visually and psychologically complex paintings that explore dreams and allegories in highly theatrical and dramatic scenes. The final painting in this grouping shows a half-jaguar cat. Almaraz often uses the mythical jaguar (along with the condor and snake), because it is a shamanistic creature in indigenous Central and South American mythology that communicates between earth and heaven, unlike Greek and Judeo-Christian concepts of an undergound hell. In this magnificent final painting, the jaguar is depicted as a human baby with a tail beside a nude woman sporting an antler (another frequent motif). This stylized scene, complete with a curtain, suggests a stage of life that is a weird but wonderful psychodrama, reminiscent of David Lynch’s view of American suburban domesticity. In Almaraz’ paintings nothing is ever just one thing. Almaraz is best known for his earlier public art, which is more one-dimensional (like most political art) than these later studio paintings that reveal the strife of a mature artist who turns inward for a fearless archeology of his own conflicted psyche.