“War of the Worlds” Redux
On Location At 7th & Hill 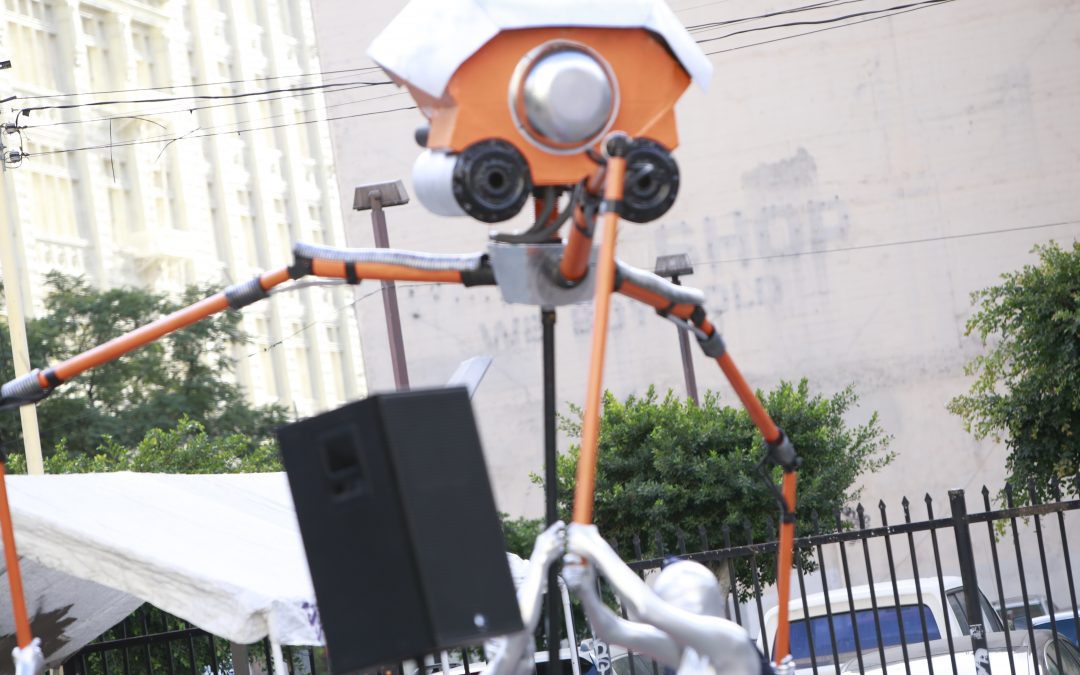 War of the Worlds


It’s just another ordinary November day in Los Angeles: sunny, partly cloudy with a hint of danger in the air. How else to explain the presence of General Lansing (Hadleigh Adams) in this empty parking lot at 7th and Hill? OY! Ross Steeves is telling everybody to calm down. He also asks who wants a Starbucks? Make ours a pumpkin spice latte, please. Steeves is looking a bit harried as he commands fellow grunt Carolyn Michelle Smith to be more alert. We’re also told that there are cyanide pills under our seats, in case of imminent, well, death! The hell with Starbucks. There’s trouble on the horizon and Lansing thinks he sees something on top of the cylinder. Who knew that these WWII sirens – some 276 of them to be precise – have been scattered throughout our burg all these years…just waiting to be re-activated. Is it a bird, a plane or what? We hear that 700 armed men are closing in on the old metal tube. And the cylinder is rising. It’s standing on legs…actually rearing up on a sort of metal framework. Wow! Even the soldiers are freaking out. That doesn’t bode well for us civilians, who just came out on this humdrum day to listen to some Annie Gosfield music with a libretto by Yuval Sharon. Whee! They’re coming. And much as we hate to admit it, this strange looking creature seems a bit benign – and a Louise Bourgeois sculpture it ain’t. We love how it’s being powered, in any case, by silver-clad terpsichoreans. Our kind of aliens. It’s good to see that the soldiers, including Cheryl Umana, roused themselves and are back to giving orders. EEK! On closer inspection, we notice that these beings (pictured here: Jessica Kittredge), only have one eye. How very Cyclopsesque! (Thanks to costume designer Jaymee Ngernwichit, alien choreographer Lara Helena and production designer Calder Greenwood.) Sanity and peace prevail! The invasion has been halted, and we understand that the titanium of Frank Gehry‘s Walt Disney Concert Hall repelled the aliens’ heat rays. Take a bow, soldiers and alien movers – Myles Brewer, Jen Haley and Ottavio Taddei – and let us all rejoice in the power of music, especially as performed by the stellar musicians of the Los Angeles Philharmonic. Yes!

Phantom Street Artist has been a photographer, commentator and journalist for numerous editors, media outlets and publications. In addition, Phantom founded Art Saves Lives and its independent media channel, PYR8FREETV, which critiques our culture through its campaigns of social inquiry and protest.