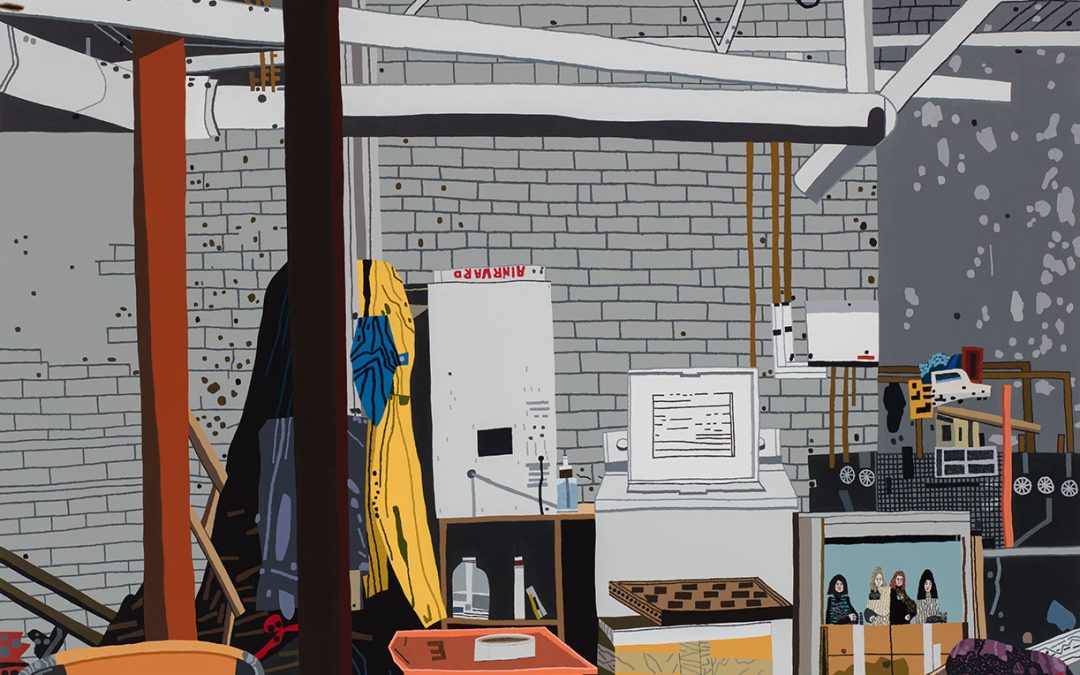 
Kordansky Gallery celebrates L.A.-based artist Jonas Wood’s newest works in three of its galleries. Like the spaces they occupy, the canvases are vast, most floating at around 100” tall x 100” wide. Created with oil and acrylic, these paintings depict spaces from Wood’s own life – as well as places belonging to those he knows – and scenes from cartoons and movies that have been embedded in his memory. Alongside representations of kitchens and bedrooms, works like Basement on Pigeon Hill represent the inside world. Others, including Romancing the Stone, a green-hued hillside view, explore the natural outside world. There are also paintings that keenly combine the two atmospheres: The scenes are at once both indoors and in nature, with Jungle Kitchen and Exterior with Hanging Plants fine exemplars.

The large scale of Wood’s paintings invites the viewer to step into the frame, a portal to a world more vibrant than our own. The scenes depict people living within those spaces, with objects such as boxes and clothing frequently dispersed throughout the images. People, on the other hand, are frequently left out of the paintings, injecting a more spatially-aware tone than an emotional one throughout these works. Those paintings that do feature people – coyly, as it were – include Blackwelder Self– Portrait, in which the artist stands still, like a statue in a flat plane, and Helen’s Room, wherein a cat appears on the bed much like an old bunched-up sweater. Highly stylized, these paintings clearly do more than represent one man’s surrounding environments: They keep the people that dwell in those spaces alive through a window of memory. Bringing to mind the phrase “if these walls could talk,” the flatness of the forms is compromised by the way they vibrate with juxtaposed patterning. Though they are cartoonish interpretations that employ blocks of color, the works’ many lines lend them motion, an animated quality. Dots and lines embedded throughout the framework establish the spaces as whirling and spinning rather than stagnant. Though Wood’s paintings are flat renderings of momentarily unoccupied spaces, they are not melancholic, but dazzle in their brightness.

By dint of scale, color, use of line and detail, and an awareness of the human world, these works are emblematic of Wood’s ability to at once aestheticize the world and capture its many feelings, while simultaneously blurring the lines between the natural and the artificial.