Hans Burkhardt in Mexico
A Celebration of Form and Color 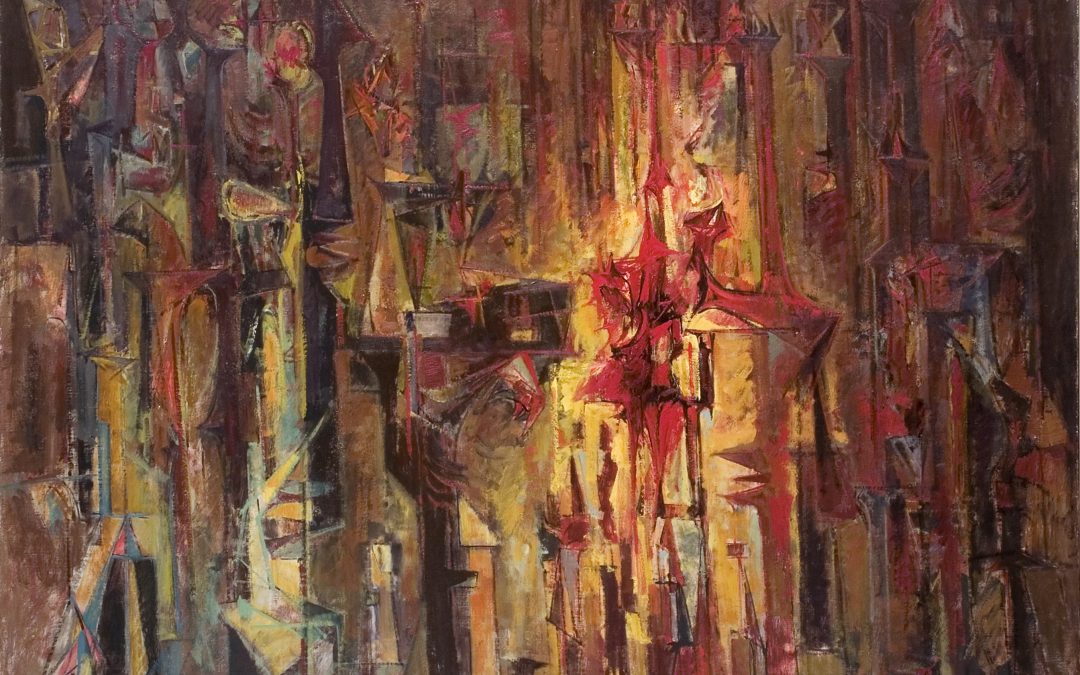 
Widely regarded as one of the great Mexican painters of all time is Hans Burkhardt, who, oddly, was a Swiss-born painter who grew up in Los Angeles. His Latin American identity, however, is granted to him through the honest and innovative ways in which he communicated the spirit of Mexico, where he resided for many years. Upon entering the gallery, viewers encounter such works such as Journey (1956), a mostly grey, blue and black foray into the unknown – abstract figures stand tall among the expansive, fading space around them. In that same room are pieces from his series Silent Sounds, including Sounds of San Miguel (1960), which depicts the ringing of the city’s bells in shapes that create a ghostly echo that are electric, near-sonic writhings of color. Though a constant awareness of mortality underlies Burkhardt’s works, they are not dark, but are alive in form and color and are even celebratory. In City at Night I, Guadalajara (1957), structural forms highlight Burkhardt’s expertise in the city’s topography and his ability to render same in his own way. The work is architectural, dark and burning, though the palpability of his emotional awareness is never retired, nor is his ability to create a sense of reconciliation and hope. With By the Candle Light (1950), the energetic glow radiated by children transforms into blocks of red, orange, and yellow, hues of welcoming warmth. Pieces that further explore death and the traditional processions associated with it include Earth to Earth (1956) and Memory of San Miguel (1956). Situated across from these paintings are works such as Empty Houses and La Casa, both from 1951, which depict abstract, blocky houses. The isolated compositional choices constitute a smooth glimpse into the spirit of the city’s architecture. Indeed, part of Burkhardt’s effectiveness lies in this ability to constantly reconcile the spiritual with the physical.

Also on view: paintings exemplifying the artist’s capacity to capture the essence of the culture through his own experience. Objects and people are reduced to shapes, and in this way become infinite, as in Easter Morning (1951) and Flag Day (1950), the latter a rhythmic representation of a cultural ceremony and its excitement.

Hans Burkhardt in Mexico seamlessly arranges works from 1950 and on. The piety of the people, despite the seemingly constant reminders of mortality in the city – funeral processions, ringing church bells – touched Burkhardt so intensely that these themes dominated his life’s work. His paintings are more than an aesthetically satiating array of abstraction – they are deeply aware and empathetic. Never shy of bold hues, these works employ coloristic techniques that communicate the honest and raw approach he took in representing his surroundings. Summed up eloquently by gallerist Jack Rutberg, Burkhardt had a genuine ability to “capture a scene not only as it is seen, but as it is felt.”

This exhibition is part of the Getty‘s region-wide endeavor, Pacific Standard Time: LA/LA; also on view at the gallery is the exhibition LIBERATOR: George Nama & George A. Romero